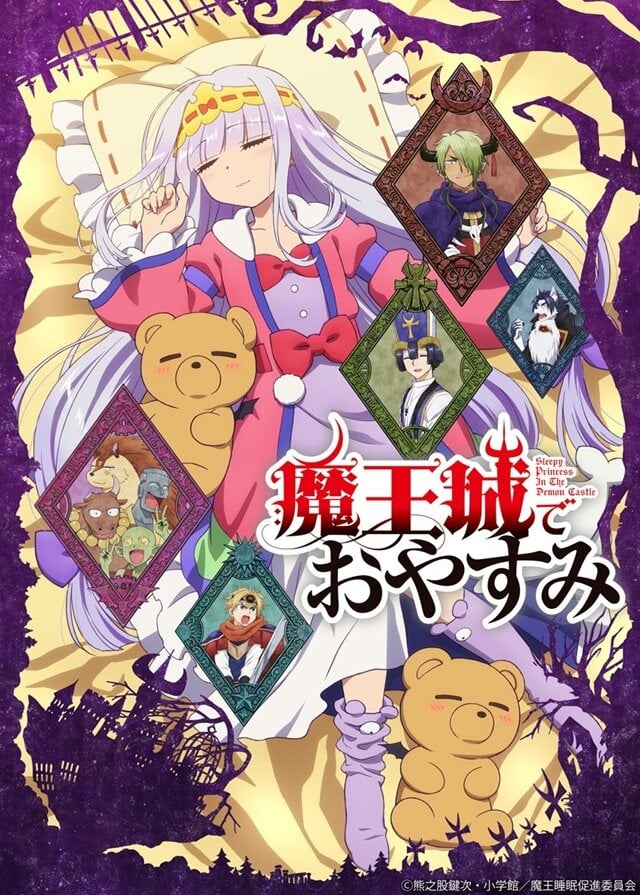 If you're looking for anime similar to Sleepy Princess in the Demon Castle, you might like these titles.

Suzuki Iruma, human, 14, one day finds himself taken against his will into the world of demons. To add to his predicament, his doting owner and self-appointed "Grandpa" is the chair-demon at his new school. In order to survive, Iruma must deal with a haughty student who challenges him to a duel, a girl with adjustment issues, and so many more scary beings! Can this ultimate pacifist dodge the slings and arrows that are flung his way? As he struggles frantically, Iruma's innate kindness begins to win over enemies.

While the plots are not exactly similar, both of these shows have a very unique niche genre I would call "wholesome demon comedy" and they are both surprisingly good. Both feature main characters that get kidnapped and learn to live with their situation.

Both are comedies, that that both feature abducted by demons theme. MCs go similar path but with totally oposite way of doing things.

Banished from Heaven, Beelzebub rules over Pandemonium where former angels that turned into demons work. One day, Beelzebub gets a new attendant named Mullin. Beelzebub seems wise and cool... but she's actually a girl that loves fluffy things! Mullin is shocked at this revelation but still tries to get closer to Beelzebub every day. They are surrounded by various other unique and clumsy demons, and in this story might be about the demons giving a certain emotion a name... maybe.

Both focus on a demon-like setting. The female leads are very cute. Very wholesome. Overall they are very similar and pull your heartstrings.

Same calming energy. The protagonists are charming and cute with an army of characters supporting them in good nature.

I'll make clear right from the get go that: the plot, setting, storyline and the majority of the characters are absolutely nothing alike.

But that isn't what "if you liked this, you'll like that" is all about. I believe that if you liked the sense of random style humor and the overall easy watch feel of Sleepy Princess in the Demon castle or the same for Nichijou, you'll probably enjoy the heck out of the other.

Both are hilarious, fast paced and truly endearingly odd.

You may disagree, but I think these 2 are peas in a pod.

Innocent, naive, and locked in the castle tower since birth, Princess Arete wants nothing more than to escape the royal life and live as the commoners live, and to see things that she has only dreamed about in her books. One day, her wish is granted -- though under less than ideal circumstances -- by the sorcerer Boax, who charms her into becoming his wife. On his flying machine from the days of magic, Arete embarks on a mystical journey full of discovery, enlightenment, and wonder beyond belief...

The Misfit of Demon King Academy 2

Second season of The Misfit of Demon King Academy.

Continuation of The Misfit of Demon King Academy 2.

The Seven Deadly Sins may have ended the tyranny of The Ten Commandments for now, but that doesn't mean all is peaceful in the kingdom. Separated from the rest of The Sins, King and Diane strike a deal with former Commandments Gloxinia and Drole, and agree to undergo special training--which sends them to a Britannia 3,000 years in the past, right before the end of the Holy War! Can the pair navigate this strange past--and a threat more powerful than The Ten Commandments?

The Seven Deadly Sins: Revival of The Commandments