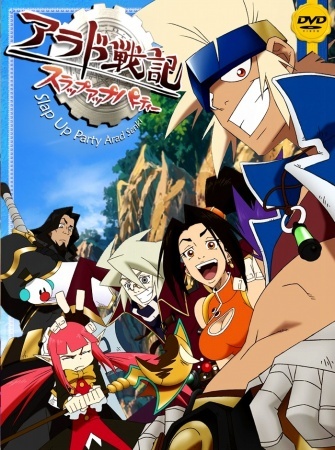 Well, this show turned out to be a major disappointment. The first episode made it look like this anime would have a plot line and somewhat interesting characters, but both the characters and plot ended up being extremely lacking in substance. The plotline with the character Roxy could have been used to direct the entire show. Instead, any serious plot was tossed aside for the sake of bad comedy.

A woman, Roxy, turns into a demon because of a curse, dies, and her spirit somehow ends up stuck in the sword of a warrior named Baron. Although Roxy's small spirit is sometimes seen hovering next to Baron, she doesn't really do anything at all. This show could have used Roxy's curse as a major plot point, but it's almost ignored completely. It felt like the writers wanted her to be in the sword for a specific reason, but were too lazy to explain why.

But back to the actual plot.

Baron seems to be on a journey to find a cure for his own curse (cursed arm). Along the way he picks up a few friends he meets randomly, who decide to join him on his journey for no legitimate reason.

So they begin to travel and nothing happens. There's no real connecting plot between the episodes. Baron's curse is sometimes brought up, but no information is ever gained. They walk into a village, see a problem, help out the town, then leave. Repeat for ten episodes. The show became dull very fast after I realized the plot was non-exsistant. At the end of the show the writers seemed to try to finally give it a plot, but it was weak and the terrible character dialogue ruins it.

Overall, very weak plot without a proper intention or goal in mind. The main focus of the writers seemed to be on the comedy (which was goofy and terrible), and not creating an interesting show.

None of the characters were interesting or very original. They played off a mix of RPG and anime stereotypes without giving them much depth, backstory, or relatability. They could have all died and I wouldn't have cared very much.

Although some screenshots look good, and the first episode seems to put a lot of effort into creating a promising plot, avoid this show at all costs. From the plot to the characters to the comedy, everything is weak and could have been done better. It can be good for a few little laughs, but twenty six episodes is far too long for this show, don't waste your time. The only people who may enjoy this are fantasy RPG superfans.

Slap Up Party: Arad Senki is a rather slow paced, and basic shounen anime. Some things do stand out that I found rather enjoyable.

Story: There isn't much story to be had. The premise revolves around trying to cure kazan's curse, which is responsible for turning people into demons.

Animation: I quite liked the animation. It's colorful and vibrant, and the characters and scenery are just nice to look at. The animation is pretty smooth throughout.

Sound: Nothing really stands out, though I enjoyed the retro goodness of the ED.

Characters: There is not much in terms of progression or back story, but the characters are nicely designed and are rather entertaining. There's Baron, the demon knight, who is a laid back defender of justice. He has some funny moments, and is pretty cool. Next is Capensis, the gunner, who is similar to sanji from one piece, but isn't as cool and is more goofy. There's Ryunmei, the fighter with large breasts. She's your basic independent woman who is the base for light ecchi elements, yet doesn't really get annoying. Then there's Ixia, the young mage. She's generally not very exciting, but has some funny moments. Last is Jeda, the manly, funny priest, who is borderline homosexual. He is quite entertaining and funny, though unfortunately he doesn't get many scenes to show that off.

In conclusion, Slap Up Party: Arad Senki can be a fun little show if you enjoy shounen anime, and do not mind the slow pace and childish overtone of it. I'd recommend it to people that enjoy watching more family friendly shounens. 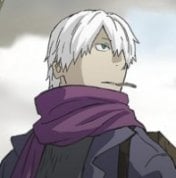 Story: It's a really basic storyline, and even then its a slow progressing one. Episodes often feel disjointed and don't really lead up to each other until late in the series. Basically it's a group of main characters coming together and setting off on a journey that eventually ends up with them saving the world. Great.

Animation: The style the characters are drawn really bugged me at first, but one can get used to it. The designs are all based off of Dungeon Fighter Online (or Dungeon & Fighter, or Arad Senki, whatever) so they're obviously not very original, but they were recreated decently, I suppose.

Sound: Music works out well, but voices didn't really fit the character sometimes. That could just be me, so I give sound a 7.

Characters: There's no real development with the characters really. Sure there are hints of love, and the gunner does well as comedy relief, but nothing too special. I do like how the villains are portrayed though.

Overall: A mediocre anime, but that's not bad considering it's based off of a game. The comedy can hold the viewers attention long enough to get to the meat of things, which is very late in the series. Until then, the series is best enjoyed by treating each episode without any regard for the previous or next episodes.

Wonderful adventurous Anime. we want season 2, only thing i didn't like the Hiria, Erbek, Harsen as keep on murdering people and they show them like good fellows, except this everything is good and every character is enjoyable

It was only when I was searching the very darkest orefices of my Grotto that I came across this Anime. A duo of years ago to be exact, based upon a successful game in South Korea, a somewhat successful game in America and a game you can't even play in Britain (A relief or a curse, I do not know). Now, before I spill the gravy, which I actually wished to save for another ocassion (such as losing my virginity), I must unveil my first reactions:

2) Oh boy. It's got Kenichi Suzumura in it

Well, let me rephrase that: It's better than say, my grimy jockstrap. But it's worse than a less grimy sock that a greasy lad had used to pleasure himself since the Dark Ages.

Story wise, although it's that simple "The hero is looking for someone/something, others join him" affair, the episodic nature of the series for the most part did pull me in. I for one am into that type of stuff, that way I can continue torturing people with my monotonous English accent without worrying about the plot. I can tell you now though, that the last few episodes are so confusing, with random plot twists with no weight behind them being thrown at you every minute, that you'll be ripping at your throat like Jirou Tomitake from Higurashi When they Cry.

The cast is a generic one, you've got the hero with a dark past, the idiot romantic, the tough big breasted girl and the angry loli. Throw in a Priest that likes to molest the main man and dress in very revealing swimsuits then you've got yourself a winner.

Speaking seriously, the cast IS generic, but they did grab my attention somewhat. And Suzumura, being Suzumura and all, does a brilliant job as Cabensis (Capensis?)

Along with your salad, you have the cheesy villains, but luckily there are no creepy moustaches. You have the overly depressing silent guy, his evil girlfriend and his idiot sidekick.

The Animation is pretty average for 2009. I personally like the style myself, and it does stand out as a unique style, but it really is basic. I could re-enact all the scenes with hand puppets and it'll look just as realistic.

I find that if you just got into anime, or your friend or kids (If you've somehow gotten laid despite being an anime fan) have just begun the journey into the world of Japanese Animation, this is a pretty good place to start. It's got most of the important anime stereotypes present at the very beginning, and it'll hold your hand for the first few steps... Providing you've washed them after touching that damn Jockstrap *shudders*