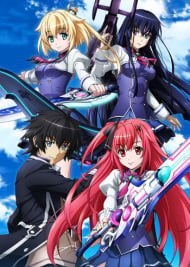 I hardly ever write a review for a show that I don't watch all the way through, but I simply can't stand to watch anymore of this one. I think it may be one of the worst shows I've ever seen... Story 2/10 Geez, and this is the highest ranked category. There's absolutely nothing original about this story. It's your typical post-apocolyptic adventure complete with bug-things for enemies, special people that can save the world and floating cities that are constantly under attack but never seem to really take any damage. The magic people go to school to be more magical and they can use weapons that are summoned with rings or something...like Captain Planet with less environmentally friendly lessons. Your main character used to be a badass and now he's broken or something, so like most great minds he tries his hand at teaching. And where else to have him start but with the most incapable (maybe) students that, for some reason, the administration hasn't just dropped from their student army. I have no idea if the story ends up getting anywhere, since I only watched the first six episodes, but my guess is no. I don't know why I gave this a 2... Animation 1/10 To call what they use in this show animation is probably a bit of a stretch. When they "fight" the weapons never move. When they "fly" their bodies never move. Every shot hits, reguardless of the direction the weapon is pointed, and for some stupid reason everything blows up when hit. I guess the demon beetles or whatever could have explosive properties... Characters 1/10 So, the only reason I watched this show six weeks in a row is because I really just wanted to know the main character's (Kanata) backstory. I probably should have just looked it up from the beginning instead of submitting my attention to something so painstakingly awful. The first episode introduces this "elite" team of fighters with Kanata being their ace. They make their way through an explosive battle and Kanata is forced to stay behind and fend off a very large group of evil bugs. But don't worry, one shot takes out thousands of them. Anyways, the scene cuts out with Kanata facing incredible odds and lands us a few months? into the future where everyone hates him for being a traitor. They don't explain why he's hated or what happened to him, but now he's a low life. But, his teamates still talk to him...well...except Yuri his sort of ex-girlfriend. The leader of the Sky Wizards assigns him the worst team of students in the hopes that he will be able to help them not suck at life. I don't really get why they wouldn't just expell them...but I guess there wouldn't be a story. But seriously,  I would have just kicked them out. You've got Misora, the pointy toothed good-for-nothing, who has potential on the basic level but refuses to use the correct magic weapon because of her famous and dead mom. There's Lecty, the super boobed social anxiety chick, whose family is well-known for their double bladed  fighting style. Lecty is actually good at fighting but her inability to talk to people keeps her from being able to kick their ass...wha? And of course we have Rico, the self proclaimed goddess walking amongst mere mortals who is also really good at stuff but because she doesn't see any reason to practice with her team and show up for school, her ranking is horrible. Also, nothing in the show gave me the impression that she was any good, except for Kanata reading her profile and saying it was so.  For some reason, I thought maybe the show was just getting a really slow start but episode six put the nail in the coffin that was already in the ground. Our heroes are shoved into a battle that they aren't ready for and in a mix of bad animation and horrible dialogue, Kanata realizes that he will have to step in and help save the day. He does, but his fight is super boring and it doesn't reveal any of the backstory that may have made the show bearable to watch until the end.  OH! I forgot one more super awsome thing about the show. When a Sky Wizard dies, the normies all forget about them. Yes, that's right. For absolutely no reason. Well, they may have explained why...but who cares. Why in the world would that make a difference? Short answer, it doesn't. Just a feeble attempt at the feels. Man, I haven't been this negative about a show in a long time...  Overall 1/10 Another time, another review.

**FIRST REVIEW** I never written a review before & I hate reading reviews since EVERYONE has a bias opinion about EVERY F-CKING apsect about anime. Whether its the animation, sound, character, voice, ect. BUT, my biggest PETPEEVE is SPOILER ALERT(S) & never EVER mentioning ANY spoil alerts in the review... BUT, back to the anime at hand. First off I have to say the main charactor Kanata Age is an older version of Saito Hiraga from Familiar of Zero(Zero no Tsukaima.) BOTH ARE AMAZING SWORDSMAN & HAVE EXTRADINORARY POWER...COIDENCE..I DON'T THINK SO!!!!! Kanata                                       Saito I finished watching episode 9(latest released episode at the time of this review) and I have to to say the story is pretty amazing, but sometimes slow. The anime does OVERUSED a bit of uh..."comedy"...In all 9 episodes..especially the last one(watch it..Im serious the other female main characters are either jealous or stupid or even both) keep stating he is a pervert...no matter how diar the situation... But, anyway this anime DOES have an actual story line & makes deeper connections with all the characters throughtout every episode & all the characters overcome some obstacle in one way or another...   I'll add more or not & I'll probably write another review that no one will ever read or mock...so this anime... Will be a great series..well I hope so...

Oh Diomedea Animations, where do I even begin... You're like a roller coaster, sometimes you give us surprisingly interesting shows that leave me grasping for more, and sometimes you give us this. Kuusen Madoushi Kouhosei no Kyoukan, or the alternative to CG: Strike Witches Edition as I call it, is what I would give as an example of what not to do in a company. It's filled with so many problems, that it's hard to enjoy the few good poits that seldomly arise. Story The story is nothing really new, and has been wrung dry at this point. Humanity has been all but obliderated, and the remaining survivors have created a last stand for humanity either in the sky, underground, behind walls... you get the point. Luckily though, we humans have somehow evolved our technology to the point of superpowers. Is there anything wrong with these types of plots? No. Strike Witches does it, Gurren Lagann does it, and they have been quite successful. So why does Kuusen Madoushi's story flop? Because it's story board looks like swiss cheese. Where do the powers come from? Where did the stupid cockroaches spawn? Why are Kirito 2's friends pinning shit on him? Why has the world gotten so bad that a group of kids is collectively better than any other form of military? None of this we are told. "But the light novel...". I've read the LN, and these haven't been answered. Animation If you know my weeaboo ass, then you know there's only a few things I hate in anime. Mecha, no yuri, and CG. When I'm on the edge of my seat, fully engaged in an anime, one distracting CG element can throw me out. Kuusen Madoushi, unfortunately, gives us plenty of it. During basically ALL scenes where the characters are flying, they are CG. If I wanted to see Play-Doh looking characters running around, I'd watch Wallace & Gramit. Not only the characters, but the 'bugs', the weapons, the fucking Shroomite-Board, AND EVEN AN IDLE TABLE are CG. They should have taken the God Eater or Expelled From Paradise route at this point and just gone full CG. But enough on CG for now... Some of the animation was bearable. The character quality was slightly below average for this company. Problem children style may have been much more suitable to be honest. I did thoroughly enjoy the nice two minute fight between Kirito2 and Lecty in the beginning. Have to give them props where it's due. Other than that they just shit themselves. Sound It's easy to tickle my pickle when it comes to sound. Any OP/ED like Death Parade, Tokyo Ghoul, or just Sawano Hiroyuki will make me give 8/8. Even if the BGM sucked I'd give it decent rating for this alone. But once again I'm let down by Diomedea. I will admit that they aren't known for any good OP/ED, but their BGM usually gives the proper vibe. Luckily they did so once again. While the music did seem slightly odd at points, it never seemed misplaced. This is probably the anime's strongest point. Which isn't a good thing. Characters Lecty Eisenach is the only character I'm ok with. She's the cliche clumsy shy girl with breasts half her body weight, but she gives off enough adorable vibe that you are able to endure her. Something the other characters lack. Misora Whitale was poorly written in my opinion. Poor little Nozomi Yamamoto did her best voicing her, but her lines and attitude just came off as 'that annoying, idiotic bitch'. Nozomi has a good record under her belt, with characters like Sakura from 'K', Ao from Yona of the Dawn, and many more. Unfortunately she couldn't pull out those types of characters with what they gave her. Or maybe the script was masterfully written and she herself sucks? kek. Kanata Age. I don't know how to feel about him. This super powerful, top of the line sword fighter has been more and more frequent with Yoshitsugu. Kirito from Sword Art Online, Bell from Dungeon Defenders, Mace Windu from Sword Art Online II... The list goes on and on. Honestly I really enjoy this type of character. It can set up for some pretty epic fights. The characters and story for this anime just don't give him justice. Black haired girl is an egotistical bitch, disregard her. All in all, this anime is just another brick in the wall of CG, lazy writing, and cliche characters with great VAs, that didn't get to show their stuff. <h1> </h1> <h1> </h1> 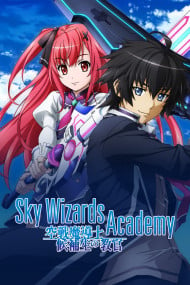 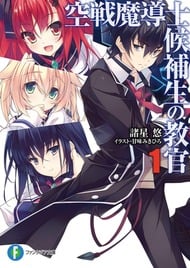 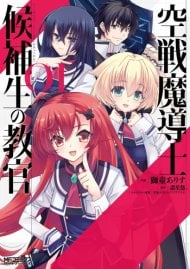