Alt title: A Predator in a Skirt

When I first heard about this anime, I thought it was a yuri, so I wasn't planning on watching it. Days later, I came across it again and decided to read the synopsis. The whole premise seemed interesting enough, and besides the episodes are only 4 minutes each. I decided to watch it the day the last episode came out, since I was bored, and it would only take 48 minutes to watch the whole thing.  It starts off pretty decently. Shizuka, the main character, feels uncomfortable around guys, so her friend decides to take her to a mixer. Shizuka decides to go to the bathroom, where she meets a beautiful woman. They start talking and she doesn't feel uncomfortable with her. Anyone who has read the synopsis knows what's going to happen in the first episode. So Shizuka agrees to go to this stranger's apartment, and that's when everything started getting weird. Ryou started kissing Shizuka and it was later revealed that Ryou is a guy, since he gets an erection and starts talking in his normal voice. He then begins to forcefully take off Shizuka's clothes and sexually abuse her. I'm not gonna go into too much detail... but after that, Ryou starts stalking Shizuka and even showing up at her school. Ryou keeps on forcefully touching Shizuka. There are sexual scenes in almost every episode, most of them happening at really random moments and in public places. Shizuka gets to see Ryou without his woman desguise, and he's actually realy cute. So why does he cross dress? Later on, Ryou reveals the reason. This is the part I really liked. Basically, Ryou had a lot of fans, but he disliked the fact that they only cared about his looks and didn't even take his personality into consideration. He decided to start crossdressing so that he could meet someone who actually liked him for his personality. Then, he met Shizuka. He fell in love with her because she didn't judge him and they had a pretty good conversation. At the same time, Shizuka was glad she could finally feel comfortable with someone, since she was terrified of men. Still, none of that justifies Ryou's actions. He always justified his sexual abuse towards Shizuka with "I love you." In what world does rape equal love? That was just totally unnecessary and ended up ruining the story, making it seem very unrealistic. I liked the characters and the animation, since it looks like they actually put time into this. The character development is not as good, though. I would've liked to know why Shizuka was so afraid of men. Overall: I really liked the story, since it's totally different from all the romance anime I've seen. However, the fact that this is Borderline-H ruined the whole series. Not only that, but also all the forceful sex that was really unnecessary in my opinion. You see, this could've been an awesome romance anime, but they definitely ruined it with the rape scenes. The whole forceful sex thing made it seem like Ryou didn't actually love Shizuka, but just wanted to have sex with her. Would I rewatch it? Yes, but I would skip all the sex scenes. Watch it if... You're bored, want to watch something a little different, if you are mature enough to handle the content, or if you want to see love from a different perspective (there's a bad and good one) BUT PLEASE DELETE YOUR BROWSER HISTORY AFTERWARDS. Don't watch it if... You're not wearing headphones (seriously, you'll regret it), you are too straight to tolerate this (I'm straight but... honestly, it was really sexually confusing), or you want to keep your innocence (I have none left).

*Be spoiled, my friends, with my ambiguous spoilers. Cheers.* I kept waiting for the rapist/sexual predator twist to unravel… but it never came.  Hmmm… It turns out that the guy, who does rapey things, wasn’t trying to be a rapist at all – it’s just that he only had four minutes and forty-five seconds to get his point across. -Understandable; have a good day.  In this day and age, this is quite the plot twist in and of itself. - Oh, how far we have fallen as a society. This good-looking guy, who’s tired of being chased by mobs of horny chicks all time, leads his life incognito by cross-dressing, just so he can get some peace and quiet… and to find someone who will truly love him as a person and not just for his boyish good looks, and smoking hot bod?  That logic seems pretty trackable to me...  He meets this shy girl at a mixer party, falls in love with her, and pursues her affections with the ferocity of a Viking attack.  That’s it, no tricks; just some honest-to-goodness wholesome sexual assault.  I guess I should be happy that this plot did not have a nefarious end game.  I’m actually kinda glad everything worked out in the end.  I wouldn’t want them to sully some good Christian smut with something so cliché as an evil, manipulative, molester antagonist trope.  -Simple, one-dimensional characters FTW!  I really don’t know what to think about this one, guys.  I mean, I’ve seen worse, I guess. Seriously, though – How long was that Ferris wheel ride?! 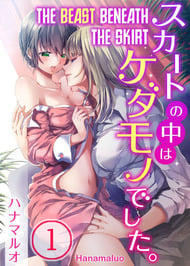 The Beast Beneath the Skirt