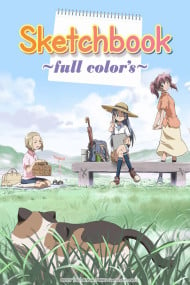 Feeling like life is boring? Nothing seems interesting or fascinating? Well then watch Sketchbook, a show that makes you think twice about how dull your life really is. Its take on the normal average things we think are dull and uninteresting will make you feel like normal is abnormal and abnormal is still abnormal.So once again we have a show with no plot, forcing the characters to center stage. However, I will only mention the more memorable characters, as there are too many for me to describe and still keep someone's attention. Sora, the main character, has a tendency to over analyze and spin things slightly too negatively, which leads to her never speaking a full sentence and speaking only through strange inner monologues. Kate, the Canadian foreign exchange student who's loose grasp on japanese and japanese culture makes her question the strangest little things that they put up with, like how terrible the magic in that magic open packet is, and how kanji is confusing. Plus she's voiced by Yuko Goto, I mentioned her last lime, so check that out. Her voice in this one is quite possibly the funniest act you will ever hear, as she takes on a thick english accent on top of her already strange voice. There are also a cast of cats who mock our society and often complain about how we treat them, how would we like it if they put captions over us? And yes, there are cat-language barriers. And Locustofchiron would have my head if I din't give an honerable mention to Ryo and Fuu who's twisted antics seem like adventures I would have if there were two of me. They take something that sounds normal and put it in a vice until it stops being logical. Things like: Lobster vrs two crayfish which would win in a game of rock paper scissors, stereo exorcisms, and scamming cats.Art wise it is pretty and atmospheric, it feels much like what the world would be like if it were even more tranquil i.e. boring. But seriously, knocking the art is futile here, it really gets the job done.Music wise is pretty much jazz and peaceful tracks, so its pretty awesome there, because jazz is awesome, and the opening and closings, though soft and slow, are pretty memorable.Now, you might have caught on to this by now, but this show is the SLOWEST ANIME ON THE PLANET. Sure it is relaxing, but nothing happens ever happens. The most monumental occurrence is the main character speaking an entire sentence out loud. So if nothing is not your cup of tea, avoid this thing like Weston's hair.This is cool beans if you are into cool beans, you are more likely to be into this if you aren't quite into hidamari sketch. Still not for everyone, but for more than before.

There is a gentle charm to the iyashikei of Sketchbook -- Full Colors.  In a world of quiet characters, mostly high school students, with a smattering of cats both domestic and alley, with one obviously insane (though harmless) art teacher, we observe a quaint mixture which explains the mystery of what we call friendship.  Particularly the creation and nurturing of same, equally done with a calmness one finds remarkable. In an environment that would invoke sleep in some, one finds he doesn't.  Though the story moves slowly, I never nodded off once.  The main character’s situation was too compelling.  There is too great a depth to the routines which guide us through the premise of the whole story.  And I do mean routines, things of school life we might call humdrum.  Somehow, Sketchbook offers a touch of liveliness to these mundane things. The theme dictates everything.  We meet Sora Kajiwara, a terribly shy girl who is undergoing the trauma of entering high school.  She looks every bit that of the loner.  She is the hero of her brother Ao who supports her drawing abilities.  So Sora finds herself joining the high school art club with all those ... characters.  Top on the list is the teacher Kasugano-sensei, whose love for poultry means wearing a chicken on her head.  Daichi has a temper, and this is fuel for his camera-loving sister Minamo.  The antics are predictable.  Tick off the brother.  Click.  A photo of irate boy for all posterity.  Guitar-playing Sasaki.  Bug-loving Nagisa.  Trouble making team of Natsumi and Ryou.  Perplexing Kuga.  Stoic club president Sugyou.  People which would bother an introverted person as Sora. But Sora has friends in classmates Hazuki and Fuu.  They slowly draw Sora into their circle.  Then add to this Kate, an English transfer student whose Japanese is questionable.  Sora admires Kate's openness in a situation she should feel uncomfortable.  In one scene, quiet-voiced Sora finds herself calling out the Hazuki and Fuu as they walk home.  A breakthrough moment made all the more dramatic … gently. The animation is Sketchbook's weakness.  Or maybe it is that strength which meshes with its unassuming tone.  Think of Sketchbook as Non Non Biyori with much more muted hues.  But spectacular in detail; the crawling ant portion of the opening theme was vivid (and all too short a snippet of animation skill.  Relax, there's more).  And it plays in lock-step to the premise.  Sora sketches in her artistic endeavors.  But the last episodes teach the lesson.  Sora learns that some cherry trees mature more slowly, but they still end with a blaze of pink petals which charms the eye, just as long as you wait.  Then, with the help of a snapshot from Minamo, Sora sketches the members of the Art Club, remarking on how each has made some impact in Sora's life.  Then, Sora decides to color the piece.  Kasugano-sensei likes the piece and notices that this is Sora's first effort using color, a sure sign of budding talent.  The symbolism is undoubtedly clear.  The coloration has been quiet, muted.  So has been Sora's growth as a person. The music is warm and introspective, which teaches the series' iyashikei point to remember:  The skies are still blue, giving reason for the names of the Kajiwara children, Sora (sky) and Ao (blue).  Together they grow up to hold out hope for the better tomorrow.

Well here you are, not sure what to watch? Tired of high octane action or the overly melodramatic rom coms? This show is your cure it's like a paper cleaner or whatever rich people say. This show will mellow you out and relax faster an anime girl in a hot springs. Honestly the show is a bit boring but it is relatively funny and like I said is a good change of scenery. It reminded me of laid back camp to get a idea of the show. If you feel yourself getting to bored by epsiode 3/4 then drop it otherwise you in for some late 2000s anime goodness where overeation was rare cliches few and far between and shows actually had good endings.  I won't do a too in-depth review since it's a older show. The animation is still fine it isn't in HD but the quality is there. Sound is good scenes don't feel too empty, and the music is good as well nothing outstanding. The characters are the typical not so in-depth kind, but for the show type I typically don't care too much. Story well there isn't one, it's a SOL if you were expecting a story then circus o lay has openings.  I rated it higher than I typically do because the show did a good job with it set out to do. And on top of that the ending was great, especially when anime nowadays can't seem to end well, whether it be a single arc, a short series, or the entire show cough*one piece* cough. That's it for this one thanks for the read, have good one 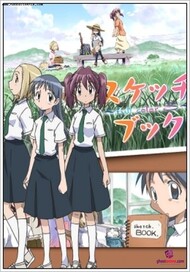 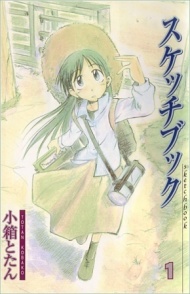