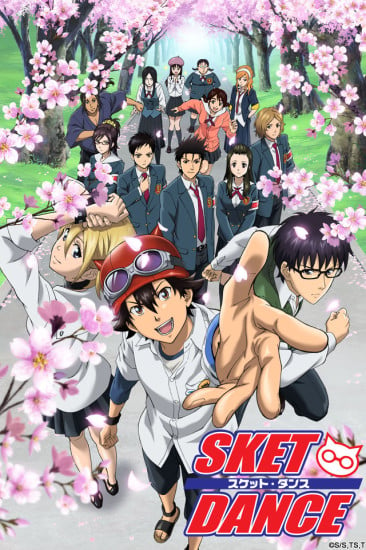 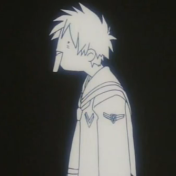 This is another one of those shows which you find out about through a random recommendation, and it ends up being one of the best things that has ever happened to you. Sket Dance may not be very popular, but it's definitely not one to miss.

The story revolves around the three main characters: Fujisaki "Bossun" Yuusuke, Onizuka "Himeko" Hime and Usui "Switch" Kazuyoshi, who are all members of the Sket Dan - a club dedicated to helping anyone in need and solving their problems. Unfortunately for them, their lack of requests usually leaves them lazing around their clubroom on most days, or at the very least, doing odd jobs around campus.

On the surface, this show seems like a typically 'optimistic' Shonen series, delivering a message about assisting others. However, watch one episode and you'll realise that it is NOT what it appears to be. The series is filled with humour, usually revolving around parodies of famous shows and personalities, or language-related gags. A word of advice - this series is best enjoyed by those who have already watched a lot of anime previously, and/or read a lot of manga. Most of the gags can be appreciated if you know anime and manga stereotypes or cliches, as this series deals with them constantly.

The animation and artwork is not special in any particular way, and yet it just seems to fit the mood of the story perfectly. The characters' expressions change constantly, and are consistent with the art of the manga. I would love to give examples here, but I won't for fear of spoiling the series for anyone who plans to watch it. All you need to know is that the animation is beautiful in its own way.

The opening and ending themes are good, although I personally prefer the ending theme. The opening is pretty misleading, though that's not necessarily a bad thing - it depends on you. The background music does not particularly stand out, but blends brilliantly with various scenes without seeming overdone. The voice acting, however, is AMAZING. The characters are all brought to life by their respective actors, and they do an incredible job.

Despite the art and humour being good, they would be nothing without a strong cast; which is exactly what makes this series stand out. The characters are easily the selling point of Sket Dance. The incredibly-popular otaku Switch, the intimidating Himeko and Bossun with his 'amazing power of concentration' make for a perfect star cast. The supporting cast includes a samurai, a creepy girl interested in the supernatural, and a Shoujo-manga artist wannabe who sees the world through an 'Otome Filter'. These are easily the most varied characters I have come across in a single series, and yet the bizarreness of it all makes it even more entertaining to watch.

Sket Dance may not be a series for those new to manga and/or anime, but for most 'veterans' it is a must-watch. Once you're hooked, you'll never want to let go.

Sket Dance- Well God, where do  I start?

Sket Dance is the biggest underrated gem in the world of anime.Dismissed by many as a School Life Gintama , I can't say if it is better than Gintama ( for I haven't seen it) BUT by no means is it less good than Gintama,or any anime out there.

The story may first seem as a simple one- 3 students, set up a help club, who will do anything, often leading to comical situations.Having 77 episodes is pretty good - for I believe that most people (including me)  are not able to emotionally connect to any 12 ep animes, and having more than 100 episodes gives many watchers second thought about watching the whole anime.Unlike Lucky Star, it is not timepass- and it has a certain randomness (which Gintama watchers will be able to relate to ).The unique randomness of Sket Dance sends me rolling on the floor laughing everytime. Infact, it is the first anime which has had such an impact on me. But the story does not end there.The backstories of the characters are tear jerking. Infact, the Switch off arc left me depressed for a month.

The only factor where i had to give it a 9/10 was the animation. I believe that the character design is ...somewhat plain. But hey, you can't really expect KyoAni animation in a comedy anime.

The sound is Magic. PURE MAGIC.Every opening and ending clutches to your heart.Sketchbook band deserves fame, man. Colors, Sekai wa okujou de miwataseta..not only sound awesome, but also help to further emotionally connect with this masterpiece.The voice acting is top-notch.Especially Tomokazu Sugita is commendable as Switch.His voice modulations send me rolling into splits :'D Himeko , without her voice actor, could not be such a good tsukkomi .

Ah, the characters. Sample this : An otaku who speaks only through a computer and gives the wittiest comments one can imagine, a tsundere, a girl who believes her life to be a manga, a wannabe Samurai, a headstrong student council prez ( not Agata, of course xD) A girl who speaks in abbreviation ( D.O.S.) ,An occult believer ( frequently fighting with switch, leading to hilarious Otaku vs. occult situations), a lead vocalist who speaks only in Visual Kei , and a main character who accepts that he has no special talent all packed into one anime. This is Sket Dance. Also there are those random teachers : a science teacher who invents dangerous stuff ( a medicine that could misalign your emotions and reactions xD) , A teacher who always has these wacky games ( my personal favourite xD). Really , the randomness of this Anime has won my heart.

I'll just put it simply : I can go on a cliff and shout on the top of my voice that it was the best moment of my life when I decided to watch Sket Dance. A 10/10 is not enough.

I am a newbie watcher of Anime and this is the second anime I have loved so much from my short experience in here. What awed me most was how every single character had their own spark and background. The comedy was really good and fun to watch, I laughed so many times. Best thing is, it wasn't just comedy. It was fun, it was heartbreaking, it was motivational, it was mesmerizing, it was one of a kind. I have reached till 60th episode until now and I am afraid how fewer episodes I am left with until reaching its end real soon. It's kinda sad that this series ended a long time ago, in 2012 I guess? It's 2018 now. Well, as it's said, all good things end faster than anything else. I want more episodes but I don't think there will be anymore. Still, here I am, I will cast all my love and support and admiration and respect to all those who worked hard in collecting ideas and creating all the episodes of Sket Dance. What can I say? You kind of illuminated my life. I owe you a huge bow for that.

Sket Dance was one of the best things to happen in my life.

one can never hate this series

I am usually very skeptical about comedy anime but this one is a masterpiece. I enjoyed every bit of it. I can't understand how this anime is so underrated and it's 2020? Y'all gotta give some attention to this one. You won't regret it.