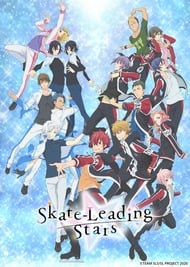 As far as sports anime go, Skate-Leading Stars isn’t complete bunk. Most of the standard requirements for your average sports anime are here: attractive athletes, fancy uniforms, an element of competition, the mysterious coach, training sequences, and a new sport never before animated to make things a little livelier. Well, okay, so the sport isn’t entirely new. Take the team skating aspect out of it and you can easily accuse this of riding on the coattails of the last anime to be set in the ice skating rink. It may have been years since the figure skating hype last hit its peak, but Skate-Leading Stars is out here to partake in all the BL-esque implications it thinks is inherent in its chosen sport anyway – even if it pales so badly in comparison to the last one. There’s a beef that gets the story going in Skate-Leading Stars, but you’d be forgiven if you forget about it midway through the story. There’s some ice skating action too, but given that there's so little of it, it’s okay if you don’t catch all of it. At best, the show gets half the job done as your run-of-the-mill sports anime, but at worst, it’s going to slip right off your mind almost immediately after you’ve seen it. Even if it presents something new-ish with its focus on team skating, the novelty dies down as soon as the show settles into its rhythm. Maybe it would have fared better if it had lead characters you could root for and get behind. But as it is, both of Skate-Leading Stars’… well, stars are some of the most unlikeable and selfish characters to lead a sports show in recent memory. Meanwhile, the other characters are sucked into their grooves and so they have to compromise, give way, and completely adjust their styles to them if they want so much as even a whiff of the tournament’s next round. Don’t look to the limited skating runs either to help you maintain interest. Save for the last two episodes, the routines are mostly presented in brief snippets and repeated shots, so the show compensates by way of extensive reactions and lengthy commentary from anyone else who’s not on the skating rink. If not for the side characters doing their part to try and keep things on the (mostly) straight and steady narrative, then the show would have been flat-out unwatchable. It’s not so entertaining that you’ll become a believer in team skating, but it’s not so bad that it will make you swear off sports anime altogether. It’s cute when it wants to be, but it’s still uber-generic, so even if it’s possible to get some spurts of energy from this, you may also find getting through it a bigger pain than it has any right to be.

It was a great anime given the fact I don't really enjoy watching skating. Somehow this anime made it so interesting for me, that I enjoyed it. The characters were good there was great development to the main character as well as his teammates. I was so invested in the anime that I finished it in just a couple of hours when usually even if the anime has ep 12 I still complete it over two days. This somewhat of a record to me.  I hope you will enjoy the anime as much as I did.

Aight ima keep it simple This is one of those animes where I'm satisfied with 12 episodes. Of course, if it had a S2 I'd be delighted. I wished it had more character development tho- [some characters may look like/give off a vibe from another character tho] Needless to say, the animation was splendid. Song, outfit, routine, everything fit perfectly. Just wait till tiktok finds this gem- What you can expect  (might have spoilers-) There isn't much failure in here, everything proceeds pretty much smoothly. [ofc with a failure but it's expected] Also, it's like your typical sports anime if ya need a reference. If you're looking for something short to get hooked up on, this is your choice.