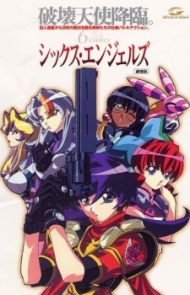 In a post-apocalyptic future where the threat of nuclear war is evident and the death penalty has been revoked, five women named Maki, Naomi, Doris, Marilyn and Katherine make up the Guard of Rose, an organization responsible for protecting women against men. Humanity now faces a new threat: Donn Canyon, a man hell-bent on purifiying the world by whatever means necessary, and only the Guard of Rose can stop him! With interfering angels, nuclear missiles pointed across the globe, and Soviet intervention, can the girls stop the countdown to destruction before it's too late?

This review was made after 5 episodes, because I don't know if I can bring myself to finish it. (Edit: I finished it.... I wish I hadn't) It's just... well, let me detail this for you. Story: The story begins with the world on the brink of war between the US, Russia, and New Purgatory, which is an underground prison somewhere in the US. Then, a quartet of kick-ass ladies show up in a space age helicopter and get into a air fight with some marines. At this point, the story swerves drastically into bland backstory, and never recovers the action of the first 3 minutes. Yes, there is action and drama and what-have-you, but there's no heart to it. And even after watching all of it, I can't tell if this is a PSA for anti-nuclear war, or a PSA against violence towards women.... Animation: To premise this, the anime was made in 2002, which is about the time Stand Alone Complex, Princess Tutu, and Chobits came out. This show looks more like it was made in the late 80s, animation style-wise. And there are some anatomy questions that I have, especially concerning the girls' battle suits and their hair, which is nearly on par with Debut. And the villain, just, it hurts my eyes if he's on screen for more than a few seconds. I don't know if he's because his character design is just awful or because the animators couldn't execute a better design. Either way, ew.  Sound: There are times when the voice actors clearly weren't given direction, and they come off as rather non-plussed during action sequences. Other times, the voice acting is ok. Most of the anime lacks background music, and either didn't have an OP/ED or the stream I watched simply cut them out. Either way, could have been better.  Characters: Completely boring. All of them. Except maybe Link, the robot rabbit. Him, I liked. Everyone else could be replaced with different people and the show would be the same.  Would I recommend this? I wouldn't wish this anime on my worst enemy.

PREFACE The first minutes of the series were really promising. Terrorists, high-tech weapons, conspiracy to destroy the world, sexy SWAT girls to the rescue… You name it! But, it quickly bogged down to a typical b-movie boring adventure. THE STAFF - The animation was done by a petty studion named Arcturus, which also happens to be their only fully animated work as well. Meh, they clearly lack the budget to do anything significant. - The director of the show is Kobayashi Makoto, a nobody whose only other work is the equally horrible Ice ovas. Clearly a guy the majority of us won’t even notice if he dies. PRODUCTION VALUES - The artwork is flashy, based on models of awesome meckas, kick-ass weapons and sexy women. But in the end they are just nice ideas based on the norm of most sci-fi titles. It also sucks big time as the robots and the characters move out of balance on many occasions, like they are not walking on the ground or simply don’t move along with it (a typical problem when you work with many separate layers of animation and pay no attansion to physics). - The 3D models are done very good, but they move unrealistically most of the time and have rather crude lightning/shadowing effects (because of the low budget, I presume). - We also have the eternally present problem that all amateur series have: The characters all look the same! Cookie cutter! Same body-type, same eye-type, same way of moving… Takes away the feeling of individuality and uniqueness; but at least the original mold is sexy enough to look at.- Mediocre voice acting and forgettable music themes and sound effects. I find nothing to say. SCRIPT Bad guy ecologist-like terrorists take control of a base. Anti-terrorist army attacks to stop them. Good guy chicks bust open some noses. Villains reveal their plan to destroy the world with radiation and then repopulate it with radiation-proof artificial beings. A few speeches about the girls’ bodies, their pasts and the future of the planet are given and then we have the final battle… That’s pretty much, it. - It’s straightforward, clichéd, and doesn’t really make you worried about the ecology of our planet. - Its small duration made it predictable and impossible to have any twists, despite the attempt to focus on multiple characters.- The plot moves way too fast. No time to appreciate what you are offered. Half the time alone is wasted on pointless battles and ecchi.- Maybe it makes sense if you are still 10 years old. If not, it is as real as the things you see when you are stoned. - It ends in a pretty obvious way; nothing you won’t expect to see from the start. But at least it HAS an ending. CAST - Completely carton characters. Most characters don’t have a personality and exist only as cannon fodder for the battles and ecchi for our pleasure. Others, who do, die anti-climactically towards the end by their own ally (a rushed solution for not leaving loose ends in the story).- There are a few attempts at trying to give them a backdrop story but the result is simply lame. There is simply no time for that!- Other than the leading girls who look sexy, no one else has a strong presence in the story. - All the characters end as they begin (excluding those who were killed, of course). LEGACY There is nothing original or likeable enough in this title, in order to deserve a second try. Its only reason for existence is for the die-hard collectors who will put it in a dusty shelf and leave it there for good. You may like its art concept and sexy girls, but you will forget pretty quickly all the rest. SUGGESTION LIST Gunslinger GirlsGhost In The Shell Battle Angel Alita