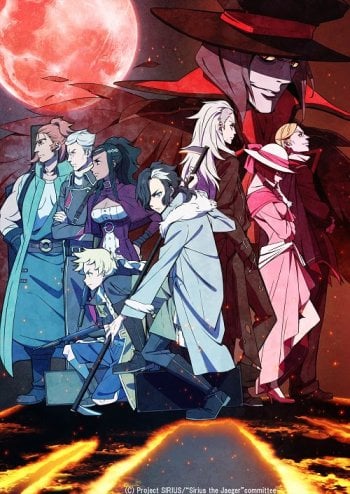 As someone who is automatically biased because I dislike vampire related animes as I feel most follow the same story types or tropes and I feel like they're bland but I still gave this one a shot.

I'd say overall it's "watchable if nothing left is on" but it's not something I'd say you should go out and watch. Decent art style with a decent budget but 70% of the characters either have no story, don't talk, and haven't said there names enough for me to even remember anyones name. I don't even think I remember the main characters name. Forgettable but not god awful.

The soundtrack was awesome. The animation was perfect and characer designes were amazing too. Especially Yuliy and Mikhail is drew so detailed and perfect. There wasn't a problem with the story. A classic vampire&reveng anime but it was good. Character development was bad. Just it did annoy a little. But its an 12 episode anime so there wasn't enough time. And the relationship between Yuliy and his brother Mikhail's relationship development was really good. Even though it was a good anime. If you love genres like vampire and revenge, this anime is the one for you.

Sirius the Jaeger in my opinion had good animation that was soothing to my eye, which is something I value a lot. If the animation was of lower quality then I would most probably not watch it. I didn't think too much of the sound, so I would say it wasn't horrible. It wasn't magic either since I didn't really pick up any traits that were superb.

Now, the story and characters. The story had me intruiged, but due to the character development in most of them made the anime overall less interesting. The characters I became more attached to was the main character, Yuliy and his brother, Mikhail. I wish, however, that they would put more story on the side characters of the Jaeger crew. They had many opportunities to put more traits and story behind them.

I am fairly sure that I would have loved Fallon and Philip as characters. And Dorothea for that matter. They all had such potential. Instead they put in a love interest which was not necessary at all. Naoe. I would rather have removed her and used more of the time they saved and put it into backgrounds to the other characters.

It would be nice to see more background to the Vampires as well. Especially the Elite Vampires and their rulers that we only see once. They could have explained what this virus was as well that were killing off the Vampires. If they did explain it, then it wasn't really hit that much on. Not enough for me to notice at least, and remember.

Overall, I did enjoy watching it. The ending was a nice one in my opinion. I just wish there was more leading up to that point. More backgrounds. In cases like this is when I actually would want some fillers, just to get to know the side characters a bit more.

I honestly couldn't find a single thing in this anime I didn't like. Some of the characters could use some more screentime or background information but other than that, it's great! The story, animation and characters are all amazing, and they fit their personalities very well. For someone who is new to anime and want to watch this, I strongly recommend you do!! You will not be disappointed.

It was promising, but the plot seemed to be incomplete. The anime wasn’t able to express the feelings of each character. It seemed messy a lot of times. There were plenty of gaps in the plot and at some times, the anime looked a bit too rushed. Too many questions weren’t answered at the end of the anime. It just doesn’t sit right with me. The ending was unsatisfactory, too. A lot of the characters weren’t likable nor hateable. All of them just didn’t seem to have a concrete personality or any strong feelings towards... anything. It just seemed a bit soulless.