Sing "Yesterday" for Me - Recommendations 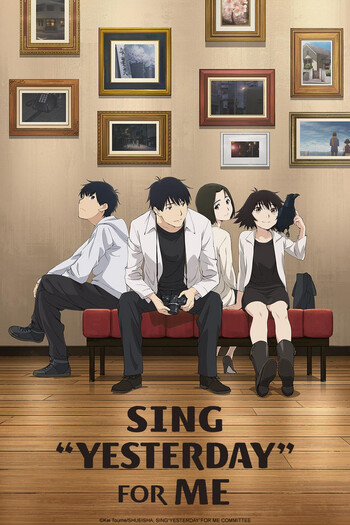 both shows deal with a self-proclaimed failure and share a subplot of a female highschooler obssesed with them, with ultirior motives in mind. both deal with adulthood after (or after droping) college.

A MC with a lack of motivation, living his life with no passion whatsover, until an energetic girls appears before him, bringing a sudden change to his life. This plot is too similar to that one of Welcome to the NHK, not to mention that it also shares similarities in the themes it plays out throughout the story.

I don't know how to explain it but both give that mysterious vibe about the girl that suddenly appeared in the life of a boy and started to follow him around. there is a triangle romance and some hidden pasts. And both have sometimes a dark aura with misunderstandings.

There's this same feeling of romantic tension in both. Both stories start with a mysterious new girl coming into the main guy's life. And the conclusions are equally as "huh".

If you want a better MC and "supernatural" vibes, go to this. I enjoyed it's first three episodes more than "Sing yesterday for me".

It’s the third year of middle school. Kotaro, a bookish boy aspiring to become a novelist, and Akane, a track girl who loves to run, meet in the same class together for the first time. They’re put in charge of the equipment for the sports festival, and slowly grow closer via LINE. How does Kotaro deal with his growing feelings for her? Meanwhile, Takumi has been in love with Akane since first year, and Akane’s friend, Chinatsu, becomes interested in Kotaro. A refreshing story of young love set in Kawagoe.

Both of these anime have a similar grounding in reality. While conventional anime romances tend to focus on the comedy and fan service aspects, these don't. They're both non flashy anime, with muted color palettes, and are both an accurate representation of how relationships unfold in real life. No unnecessary comedy, no unrealistic beach episodes, just plain realistic relationships.

you should check out After the rain if you watched/watching it might be the best option if you undetermined to choose anime close to After the rain.

Both anime feature an emphasis on romance in the working sphere. Working!! is a bit more light hearted than Sing "Yesterday" for Me, but also features a strong ensemble cast, and couples who the watcher can really root for and identify with.

These two stories are very similar. Boring, nothing extra, but quite cute. Even so, I consider them a waste of time. My expectations seem to have been too high for both of these anime.