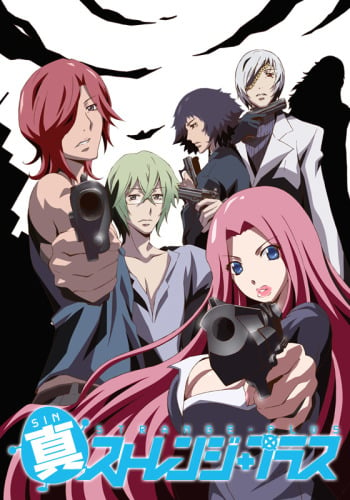 These are both random comedies where anything can happen. The setups are different Teekyuu is about a tennis club and Sin is about a dectective agency. but neither show follows its premise in favor of being gag comdies that send the jokes flying fast.

I think Teekyuu is the funnier show, but if you want some low brow humor then either of these shows will fit the bill. Just be careful when the butts start flying!

These are both low brow comdies with a ton of sexual inuendo. These are both short anime, but both shows have the jokes and gags going at a fast pace so the run times are packed to the brim with humor.

Hen Zemi is almost completely about the sexual humor whereas Sin has a bit more variety to the humor, but both know how to get down and dirty with the low brow jokes.

If you like random comedy then these are the shows for you. The settings might be completely different, but both of these shows deliver a non-stop stream of humor with tons of references to other anime.

Gintama has full length episodes and even has a plot occasionally. Sin on the other hand is a short that goes all out using its run time to deliver as many jokes and references as possiblle.

Both shows delve into the low brow and toilet humor.

Gintama is without a doubt the better show here, but if you liked one then it is likely you will enjoy the other. Just watch out when the butts and the toilet paper start flying.

These are both random gag comdies with little to no plot. If you like your humor fast paced and want to watch a show where anything can happen then these are the shows for you.

The premises of the show migh be different one is about detectives and the other about school children, but neither show is really about much of anything or has much in the way of plot. Both shows are more interested in piling on the jokes and references to other anime.

My Ordinary Life has a longer run time and is generally a better show, but if you need your random comedy fix then either of these shows should fit the bill.

The Shinmoto twins Chiko and her younger bother Chika often hang out with and their close friends; the Saitou twins Mako and her younger brother Mao. Chiko is a university student, Mako is a part timer at a cafe while both Chika and Mao are high school students. Each one of the four has a unique personality. This is an anime about their daily lives.