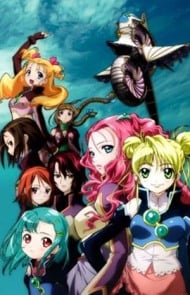 Simoun is a (cop-out follows) good idea with a dull presentation. You start looking at this show and you are given a most interesting alien setting with a world that has two suns, steampunk airships, and a civilization where everybody is born female. And as we all know, all-female cast in modern anime means shoujo-ai stuff. And there is magic, war, romance, weird gender related issues and above all it has lesbians. So what could possibly go wrong? … Well it is goddamn boring, that is what went wrong. Despite the seemingly complicating setting, the actual plot is very simple in presentation and mostly focuses on character development, rather political or social issues, wars, intrigues, or SOMETHING INTERESTING IN GENERAL.I am not against character-centered/story-poor shows IF they are done in a captivating way. Some of my favorite anime of such type are Planetes, Tatami Galaxy, and Welcome to the NHK. The characters there were amazing, the setting was fleshed-out, the production values were great. None of that occur properly in Simoun; you watch the whole thing with apathy. *yuri-goggles on* Make that with disgust if the concept of transvestites is not your cup of tea. Lesbians are fine, transvestites are not. How am I supposed to make them my waifus if they later on transform to men? This is totally gay. *yuri-goggles off*And it becomes harder and harder to like anything other than the characters in this series, since most of it is all about them and not those cool airships, or the twin suns, or the ancient ruins, or the WHOLE DAMN WAR THAT SETS THE WORLD ON FIRE! In effect, the setting goes total waste exactly because it is not handled properly. I mean just think of the Aria anime for example. What was the setting about there? A pretty space Venice and some chicks with gondolas living a carefree life; end of story. The setting didn’t need any further explaining than that but here there is supposed to be a whole bunch of stuff, none of which are dealt with properly. How are you supposed to care about wars and ancient civilizations when there are a dozen chicks blocking the way? The story is a total waste! And don’t tell me the series is not heavy on fan service so you can manage to look at something other than half naked lesbians, or you COMPLETELY MISSED THE POINT!I remember the good-old 80’s when they used to make some really shocking anime; not the modern crap we get today. One of them was Gall Force, a long line of movies and OVAs with an all female cast fighting disgusting aliens and terminator robots. The basic idea was pretty much the same and despite the older technology, the action was amazing, the violence was brutal, the character interaction was strong, and the whole thing didn’t last ten times more than it needed. Simoun did all that wrong. Before you start wandering how much big of a troll I am for saying such things about an anime that looks and sounds so nice, let me make clear that I am not talking about the actual production values. Those are very good, especially for a series made by Studio DEEN, my personal worst studio of all times (yes, even worse than GONZO, believe it or not). The artwork can be considered great and the classical European instruments used in the soundtrack do sound great and all. I am talking about the implementation of them in the context of the story. The directing; you know? Does anyone ever care about the directing or the pacing? Here is something even more interesting. How many songs do you remember and how many of all those funky backgrounds do you remember? Chances are few to none because the whole focus was given on a bunch of moe lesbians turning transvestites. Oh sure, I remember that detail very well, IT WAS THE ONLY UNIQUE THING ABOUT IT!Close to THAT memorable details are also the shapes of the airships. They are weird indeed, looking like snails with spirals and old-style biplanes. The 3D effects show their age though and they feel rather disjoined from the rest of the 2D ones. I can’t say I disliked the way they fly around or even battle but this is NOT a show you will watch for the action. The action is actually one of the dullest and most crudely aspects. What you will mostly care about is how each ship needs two underage female pilots in spicy relationships in order to fly around. Another case where the chick flavor is more important than everything else. And I don’t like it much.I must admit that the character interaction is indeed very captivating if you go all myopic into the whole deal. Nice archetypes interacting around romance, and friendship, and skinship, and which gender they will pick later on and stuff. On a basic level the characters are indeed good in mannerisms and fleshing out. Going deeper though just shows what hollow shells they are; immature snotty pampered bitches that love how people worship them and go all snobby about it. And guess what, a bunch of hormone-crazy chicks do more work than millions of soldiers. Hooray for realism! To sum it up, the premise of the anime is very good and as long as you don’t give a rat’s ass about good screenplay or directing and can indefinitely be entertained by moe and yuri cliches then this is a show for you. If not, then step away slowly because the next time you see one of these cute girls, there is a 50% probability they will have turned the whole thing into a futanari bukkake with you in the middle, and the only escape route will be an oyster looking monstrosity.And now that I ruined your dreams for tonight, have a nice day.

Plot: "In the world of Daikuuriku, all children are born female; but once they become a young adult, they may choose which sex they will become. In this world which is at war with itself, the women of Simalacrum find themselves charged with the task of piloting the ancient machines known as Simoun in hopes of turning the tide of war. Though originally simple ceremonial machines, the most gifted of pilots can turn the glowing "ri maajon" of their rituals onto their enemies and obliterate them from the skies using these Simoun. However, it takes a special bond between two highly gifted girls to successfully pilot a Simoun. With the toll of blood and pain that these previously innocent girls are taking, how many will be able to carry on, even knowing that they are the only real thing standing between freedom and subjugation of their land?" (not my work, this is the site synopsis)How should I start this review? Well i will begin with how I ended watching this anime.Well there was a time when i watched several animes with various genres having as main tags action, horror, psychological, adventure etc some of them realy were interesting and I enjoyed watching them some of them not.I longed for something else and after searching for a new anime to watch i ended with Simoun.After reading the introduction and made a first impression i said to myself "i think i shoud give it a try" and im so glad that i took this decision because i dont regret that i seen it.Story: The story was very well developed but still it had some holes in it and some unclear stuff but as whole it was pretty good.Also in the begining when stuff are a bit unclear i had the feeling that this might become a very complicated story but after passing through episodes i started to understand.As the story develops more and more stuff are revealed which realy surprized me.What i liked so much at this anime was the ending even though some of the main charas died most of the Tempest Choir members survived the war and followed their path some of them choose their gender others didnt in other words a happy ending for an anime that gives the impression that it will be tragicaly.Animation: Well in terms of animation Simoun is of course above average but i wasnt so pleased with the character design since the production year was 2006 i expected an anime with a better animation in terms of character design.Sound: Only one thing i can complain at sound is that the background sounds were kinda lame and realy hard to bear but the ending song and especially the opening song (Ishikawa Chiaki - Utsukushii kereba sore de ii) compensate for the crapy background sounds.Characters: The most interesting point in Simoun is that there is a complete focus on character development.As the story develops the number of characters increases.Im very pleased with how my favorite characters were developed: Neviril, Aaeru, Dominura and Mamina but especially Aaeru the headstrong character which helped the growth of the other characters especially Neviril.Despite the fact that the main characters were developed very good the character development still has some holes.Overall: As an overall this anime in the begining was kinda hard to watch since it leaves a feeling of boredomness but as the story develops more and more stuff were revealed and it got pretty interesting.It gave me a hunger of knowledge more exactly the curiosity of how it will eventually end.I dont regret watching this anime at all especially because of the suitable ending.~Just my thoughts and feel free to post comments~Here are some pictures:And some videos:This one with the opening song Ishikawa Chiaki - Utsukushi Kereba Sore de Ii:~Enjoy and Cya around~

I’m having a bit of difficulty rating this one properly. On one hand, it was very pretty, stylish and had a good, fairly creative storyline and characters. On the other hand, at times the style felt a bit overdone (like in the first still-frame-scream in episode one) and some of the characters felt incredibly shallow in comparison to an otherwise great cast. If I had to give a rough summary of my enjoyment while watching this, admire my paintskills: (Actual experience and recollection might differ) So ye, as you can see, it kinda jumped up and down. While the story itself was really enjoyable, the focus was too often on characters I couldn’t care about in the least. Still a good and interesting watch, but hardly the epic story I expected it to be. 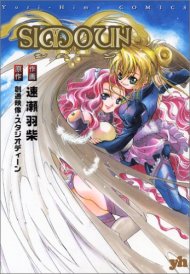