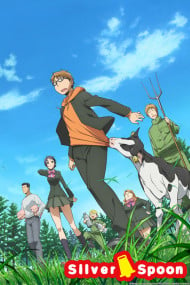 When Yuugo Hachiken enrolled at Ezonoo, an agricultural high school, he had no idea what he was getting himself into. While his classmates revel in the barnyard chores and hard labor, eager to gain skills for their careers, Yuugo is challenged and sometimes downright horrified by the things he’s having to learn, whether he’s corralling stray cows, learning the shocking truth of where chicken eggs come from, or even getting comfortable with riding a horse! Alongside peers such as the lovely Aki, Yuugo will learn all he can about agriculture, making close friends in the process.

As I watched the final episode of Silver Spoon, a single word came to mind to describe this anime. "Thoughtful." But also thought-provoking. Brief Summary: A "smart kid" who has trouble fitting in at his traditional middle school is encouraged by a teacher to apply to an agricultural high school. Once there, he learns a lot about how food is produced, as well as learning how to make friends. Themes: Making friends, business realities, the difficulties of being in the agricultural industry, how food is made, the value of hard work, the value of struggling with large moral issues (for example, should humans eat animals?), and struggling with goals/being unmotivated/not knowing if you have a life goal/parental expectations for your life. Story: I like the story a lot. It's simple, yet sincere, and allows for a lot of interesting ideas and issues to come to the surface. Animation & Sound: While I thought the sound, voice-acting, and theme songs were perfect for the show, the animation was nothing to write home about. It wasn't bad, but not stellar either. Characters: Great! A shining part of the show, each character has a unique outlook on life, a goal, and a problem that frustrates her/him. This makes them easy to relate to, and it drives the plot by creating interesting interactions. Conclusion: Good stuff: 8.8/10 Arakawa-sensei (also the mangaka for Fullmetal Alchemist) grew up on a dairy farm and that experience is definitely evident in Silver Spoon. I really enjoyed Silver Spoon. It's a totally different type of story, and it is refreshing, entertaining, thoughtful, sincere, thought-provoking, and well written. 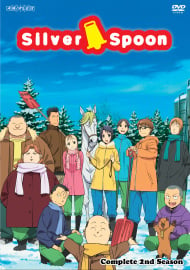 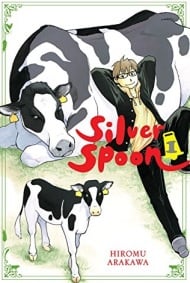