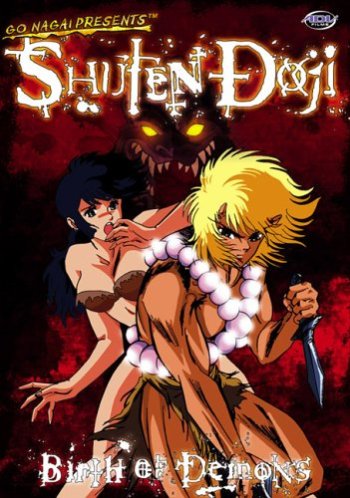 A demon from a different space and time comes to Earth carrying cargo...a baby, named Jiro. Leaving this baby to be raised in safety, the demon leaves, not to return for 15 years. As a dark and twisted cult begins preying on Jiro and his family, his true identity and destiny unfolds, for he is...Shuten Doji.

Note: this is from a video review, see https://www.youtube.com/watch?v=AIBzU_H0rRs Shuten-dōji is a myth from the Heian era, as indeed the anime explains, but whereas in history this was perceived as an oni, in this series they are not as much, or perhaps what it tries to do is present a spectrum of this perception of fear. It tries to answer, as so many tales have done that mostly use the analogous concept of 'demons', but mainly asks "why is this felt so, or even, how is it conceived?" Oni in this sense (could be generally when the creatures are a topic, but in this anime it seems to be indicated) is a psychological state that mainly represents negative emotions - whereas kitsune could be symbolic of deceit, or tanuki playfulness, oni are the darkest depths of the psyche. It is abstractly conflict, but also internal turmoil, and as such hue can vary based on association. Oni can also be an idol for what a subconsciousness could constitute. Like architecture built out of human desires, but based on nature. What if oni are not outlandish creatures defined by what isn't the norm? Read books and partook in contradictory habits? Could a cyborg be one? How about a distant attachment? It can be also counterintuitive though, e.g. what is the likelihood that a hellish oni decides to protect the most vulnerable? To do not what its id - most base desires - strive for? This is hell visually, as any superficial inspection may show, but also not objectively, as is it hell if it is but a percept? The id in this anime is very much in the picture, and it is in this way Freudian, with oni symbolic of Thanatos, the desire for death and destruction, and eros being simply what Nagai peppers the surroundings with. It was interesting how the past was conjoined with the future, and even fables given rationalizations that, contextually, seemed plausible. How historical figures happened to encounter oni, and throughout they came in different sizes, including miniatures, seemingly to indicate the level of familiarity, with a curious origin. Concepts, including sci-fi tropes, were introduced at a rate which assumed an intuitive understanding, but often animation is used to just show, and not tell, although in some instances it wasn't that subtle, e.g. when the adjective 'evil' was used, as otherwise most oni and humans seemed to be somewhere in between, not absolutes. This is horror only insomuch as one fears what may lurk in the shadows; oni use violence, but only because it at times appears to be what is expected of them as creatures of the dark, just as humans in gangs resort to plumb the depths of animosity - even when free will is not an issue (excluding peer pressure). It showcases a battle, as most tales do, between light and darkness - which is what Ankoku means, from the name of the temple of the group after the protagonist, but in reality nothing is clear until the last moment, and even then the 'light' does not seem to believe the elucidation, per se. As such, one might end up seeing both sides of this divide to be as 'in the dark' as each other. Everything might not be seen as perfectly proportional in this anime; the introduction of characters that have little screen time or purpose is a problem in mostly one episode, but even if most other incidents seem to happen randomly, they still have something meaningful, whether it is to highlight the differences between oni and those more familiar, or even historical mindsets. This, like Teito Monogatari, mixes a slight bit of history (in SD mythology is more prominent) along fiction that is built on top of it, and like Onikirimaru it inserts interpersonal drama that juxtaposes the existence of oni along others' lives, although they are more verbal than the ones in the latter series, and at a couple of junctures they even display sadness which oni aren't typically associated with. The situation with which Yasaburou in Uchouten Kazoku contends with for just one episode is vaguely similar, as oni are similarly depicted in a different dimension, unlike kitsune or tanuki who can live in a plain world, oni seem to be inherently too big and scary, and this is where Shuten tries to approach this from, the points of view of a spectrum of oni. It also seems to have cycles for some different things, e.g. in two instances both humans and oni roll over a hill, and the detaching of an arm seems to be a recurring incident, which is likely a reference to the original Watanabe no Tsuna legend. In the end, this anime turns out to have a narrative that, despite being seemingly interested in superficial happenstances that have no other bearing on the story itself (besides fulfilling instinctual desires, as mentioned previously), is all-encompassing and more subtle than not (beyond the conflicts there is psychology), and attempts to be as existential as possible. While it could have conveyed a similar approach using less violence, oni at times seem to be inevitably tied to the concept of conflict; this series, though, did at least attempt to convey a variety of coherence that most anime do not usually paint oni with. As such, it managed to have a more whole picture of the creatures than others like Onikirimaru had four years later, but if it spanned even longer perhaps the Hell Screen could be even more complete? 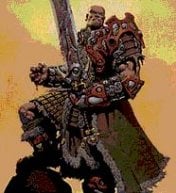 is a mixed time travel history about a legendary Oni, a strange mix of mithology and sci-fi. Manga is created by GO NAGAI so there is violence and nudity. It deserves to be seen at least once. 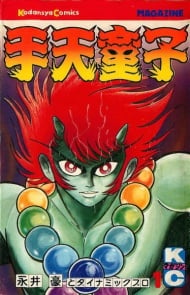