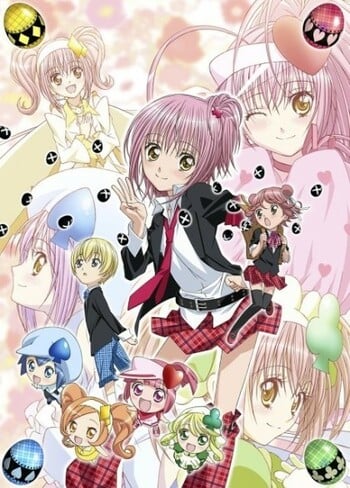 Ok, so the story wasn't that different from the others.  They are still about defeating X Eggs and finding your true self.  HOWEVER, the main problem with Shugo Chara Party that I had was this:  The first 11 or so minutes.  Literally, it had NOTHING to do with anything.  It was just an 11 minute sequence of the characters doing nothing.  All the Charas were doing nothing.  Literally, nothing that had to do with the plot or to move the story along.  So that basically gave about 10 minutes for an episode to actually happen.  And still, I believe that it didn't have enough time to actually do the episode.  And with that, what exactly do you have?

I still find the animation highly likeable.  The art style was refreshing, and it did a good job of animating the characters.

I hate the openings and endings.  These endings annoy the hell out of me.  They were very high-pitched and annoying.  Plus, I don't like the fact that they have living people dancing to these themes for an anime.  You should show the characters, not these people shoved in costumes.  The other sound was eh, I felt like it could do better.

Ok, the only ones I found likeable in this season were Utau, Kukai, Ikuto (even though he was there for like 1 episode, he was still one of the best characters in the season in my opinion), and Amu.  The others were average/halfway decent, but the problem I had are the two new characters:

Rikka: To be honest, she was flat out annoying.  She was way too energetic.  I mean, maybe if she were a bit more mellow I could have grown to like her, but she isn't.  Also, she is way too nice.  She has no mean side or anything to me.  I have never noticed a time where she was really that mean.  Also, her character transformation reminded me WAY too much about Amu and Dia's transformation.  I mean, it's practically like they just took Amu's transformation and put Rikka in it instead.

Hikaru: His personality....What personality? He is just so bland.  I just couldn't enjoy this character.  He was bored me to death.  I actually thought about going to watch Starry Sky when he was on the screen.

The did not enjoy this anime, and I don't really recommend it.

Story: So the ending of Shugo Chara Doki disappointed me a little. However, I still enjoyed it and I was happy to continue of to Shugo Chara Party. However, my hopes crashed after the very beginning. First of the new changes that were added were the cosplayers. I don't understand their purpose and they just annoyed me. I don't watch anime to watch real people dressed up as anime characters. If I did, I would go to a con. The little skits that the cosplayers did annoyed me too like the nail art and dance lessons. Are you serious? Then came Shugo Chara Puchi Puchi which were small segments involving the guardian characters. These segments could have been cute but they just ended up being lame. At the most, I would half smile. I never started laughing. These two new things ended up taking half the episode. Therefore, you now only have an 11 minute episode because you have to account for the new horoscope thing where you choose an egg and the ending. With 11 minutes, you can't do as much.  Also, with all this extra crap, they added a recap before ever new episode which tells you everything that happened in the last episode. So the actual Shugo Chara doki doki started off with an interesting concept but then turned very episodic. It become a little more fleshed out toward the end but then it just felt rushed and melodramatic. They didn't have enough time to make a fleshed out series since they only had half the time. I was very disappointed and I had to force myself to finish. I didn't have to do that before even when it was fillers.

Animation: Shugo Chara doki doki had the same animation as the previous which was beautiful. However, the puchi puchi took away from it. I know the animation wasn't meant to be very good but it still took away and didn't mesh very well.

Sound: Again, the puchi puchi took away from the series a bit but they also added new tracks to doki doki which were supbar. It didn't match the previous series in quality which was disappointing. Rika's voice was also very annoying.

Characters: No more Ikuto which was the biggest reason for the lower score. Ikuto is the reason why I love Shugo Chara so much and I think he was only present for two episodes in the entire series. Instead, you get Rika. This peppy girl who likes x eggs as pets. This whole concept confused me but showed some potential. However, I was just disappointed like almost everything else in Party.

Overall: No Ikuto, weird cosplayers, unamusing segments, and an episode half as long as it should me. If you like Shugo Chara, just watch the two episodes with Ikuto in them (ep 10 and 25). Everything else is disappointing and irriating. I'm sad to see that this was how Shugo Chara ended.

Shugo Chara was a great story until shugo chara party came around and ruined everything. they waste 10 minutes of the show with cosplayers and the shugo charas doing literally nothing. and party was cut off after around half of the episodes of the other two seasons. and they were only like 10 minutes of the actual story.

next off, what's the story in party. they find stray x eggs and meet a first and second grader. it ends before amu can decide who to be with, before she goes into middle school. everything is cut off. the second season, also was a bit uneventful, occasionally (alot of the time) they find x eggs and ? eggs. Amu Doesnt EVEN KISS ANYONE? Where's amuto? or amu and tadase? shugo chara would be better with two seasons and left hanging like it was instead of party, which was like an extra season to add to the franchise.

and the story was thin enough to begin with! Come on, Shugo Chara Series. What happened?

Story: Despite all of the bad things said about this season of Shugo Chara, I honestly didn't think it was as bad as everyone said it would be- yes, it was very flawed and pretty rubbish in comparison with the first two seasons of Shugo Chara, but it wasn't a complete trainwreck of epic proportions like I've heard it being.

Yes, the first 10 minutes of this show were absolutely empty of actual anime and irritating little cosplayers took over the screens telling you little stories what made you feel 5 years old and like an utter noob for watching this, but at least you don't HAVE to watch this bit. When I got onto episode 2 and skipped the cosplaying bit of this anime so I could watch the part whats actually mildly interesting, Shugo Chara Party! wasn't actually that bad.

The story wasn't thaaaaat interesting, the first 10 or so episodes were just plain, boring fillers- but towards the end Shugo Chara Party! does improve and I actually found the last 2 or 3 episodes admittedly quite touching and sweet. A few odd episodes in the middle of it were actually quite funny as well- like the one when Nadeshiko ''returned to Japan'' and the one where Amu had to look after Ami for a day and keep her out of mischief.

Animation: Suprisingly I found this animation worse than the 2 previous series of Shugo Chara. It seemed plain and dull.

Sound: For the first time in Shugo Chara I hve to say I disliked the music- the OP and ED were irritatingly cheesy and got on my nerves. The music IN the show however was exactly the same as the music used in the first 2 seasons of Shugo Chara, and, whilst this music IS good and suits the anime, I really felt that a new set of songs were needed for this- it made the show seem even more predictable.

Characters: Absolute 0 character development here, except for the 2 new characters: Rikka and Hikaru. But sadly, I HATED them. Rikka was bubbly, clumsy and everything a typucal Shoujo protagonist is. You could predict her every move and everything she would say. Her guardian character, Hotaru was better at least. Her calm and polite personality was a nice contrast to Rikka- I only wish she had hatched a lot sooner in this anime that about 3 episodes before the end.

Hikaru also annoyed me. His same blank expression of -______- in every single frame of every single episode did nothing but aggravate me, and when he FINALLY showed a slight hint of emotion towards the end I STILL didn't like him. I feel dead sorry for Yaya- when all the other characters graduate she gets stuck with just Rikka and Hikaru, the poor girl.

Overall: Not a great anime by any means, the characters aren't impressive and the art can be sloppy. But the story is alright and its certianly not AS bad as a lot of people make it out to be. Just don't expect anything back-breaking from this anime. Its a lot like an OVA: Short and quite dull, but nice for fans who want some extra episodes to watch.

First there's Shugo Chara!. It started out good. Some fillers, though not too much. There were some ups and downs, but all in all it was pretty good.

Then came Shugo Chara!! Doki. And that's where it went down. Lulu. With her '?-eggs'.

So, let's get this straight: there are X-eggs/charas, ?-eggs and uta-charas (third game)?

Okay, so she can hear the voices of the X-eggs? While the shugo chara themselves can't? And she has octopus hair?

And Amu and the others will stay sixth graders forever?

So far I've only seen one good part about it. Episode 7/109. But I just enjoy Nagihiko as Nadeshiko.

And Rikka is now more of a main character than Amu. Which is stupid. I really hope they get rid of her soon, but not too quick. And I also hope her hairstyle gets redone.

And if just that isn't enough, our precious anime time is taken away by live-action sequences and some very childish small stories? Like we want to watch some cosplaying girls dress their nails.

And there aren't any previews anymore!

The songs are sort of good, but in my opinion the ones by Buono! are the best. And we now have 3 songs, and only one of them is by Buono!.

If this keeps going on like this, I'm seriously going to stop watching it.