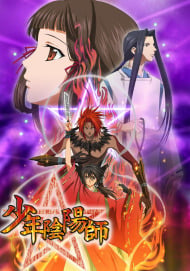 Being the insignificant heir to a talented family is rough, especially for someone who has little of his own talents and honestly desires to live up to the family name. Masahiro is the young grandson of the famed Abe no Seime. Although most consider him to be little in the face of his older male relatives, Masahiro is certain he can not only continue the family legacy but that he can stand in his own right as an Onmyouji. With the assistance of his friend Mokkun, he works to increase his skills and abilities as a spiritual protector and guide. With a great deal of will and the quiet assistance of his insightful grandfather, he will become a force of good in the battle against encroaching evil.

The beginning does not inspire confidence, but it gets better. At least this one has an actual ending unlike so many others.  The story took a while to start growing on me. It felt like the characters and scenarios could have been further developed to make an even better story, but overall it was fine. Of course, if I had my way, most anime would be 50 to 100 episodes long with few to no filler episodes. That won't happen.  One thing I liked is the main character does actually fave consequences for actions such as injuries and things. Many animes barely have consequences for situations so it's hard to really care about the character. On the other hand, these consequences last for a few seconds and then there is the powers of a god or healing magic. Still, it often doesn't completely heal everything so I give it props for that. If you like historical animes with magic and gods etc, you should give it a try. It's ending is sad though. I was a bit dissatisfied with how it concluded, but there was a conclusion so I shouldn't complain too much I suppose. I wanted consequences that lasted and I got one and didn't like it. How typical. Sorry for the short review. It's been dubbed in case you prefer dubbed anime or whatever.

This was another love hate anime. I loved it so much and then the ending, the ending just leaves you going "AND THEN!?!". I loved it up until that. I could have done with a bit less romance but as it mostly focused on masihiro and gurren I accept the love interest they felt we needed to see. I enjoyed the storyline, art, sound/music and most of all the characters personalities. I also love that the main focus isnt romance, even though it is included. I've watched it many times and each times I love it and still even though I know it is coming get annoyed with the ending. If you ignore the ending part it really is a good anime. If you don't like cliffhanger endings do not watch, it will drive you insane.

This is one of those animes that i will start watching thinking that im going to hate it, then start loving it and then by the last episode i will hate it and promise myself that i wouldn't watch it ever again. (then i watch it years later thinking that its really much better than what my childlish eyes could see and saddly realise that really i was right, that this anime is a strange combernation for crap and gold all mixed into one, and sadly it gose from god to bad).    To sum up the anime i would have to say that its weird, all through-out the anime you will question the everything and if your like me, then you will start to hate serent factors for the anime by the end of the first episode. Like the dub version ITS GODDAMM TERRIBLE!!!! some of the worse i have ever heard, and thats sayung something. Also the love interest, she is so unlikeable, its also funny. the way she speaks and how pointless she is will make you question way the 'hero' even bothers to save her.   Now to talk about the verion that you can watch. like i have said this anime is dubbed but is also subeed and i have had the painful pleasure of watching both and i would have to say that if you do want to watch this anime then please watch the sub, becasue the dub is ear bleedingly fawful. to the point were is couldnt take the storyline serisorly when i tried to watch it. everyone sound lie they have been smoking something and it will make you hate the story and the anime, if you try to watch in in the dubbed. I dont know what they were thinkng when they made this, but they must have all been high, and couldnt give a f**k about how its sounds. IT REALLY IS THAT BAD.  The good points about the anime:- its fearly beautiful and, the fight scenes are good (not perfect) and the characters are somewhat likely. i found that the side spirts anf the main spirt where the only things i like, with SPOLIER the dragon begin my favorist, even thought she is only in 2 episodes.  The prombles are:- that the story is horrible, the ending is painful that lazy (SPOLIER losing merory and stuff like that to end a anime is a load of crap, its not a real finish, all it dose if anger the viewer). The chararters are sometimes a pain (princess, and main role). the script can be slow and boring and the music isnt that great. the human are all annoying and the reasons w=why they do anything is just werid. i wanted to have the main role really do something with the spirts, like his grandfather dying and he has to fight his own demons and culd to grips with filling out his grandfather shose, whilst protecting everyone. but instead i got a poorly put together that didnt invest me at all. by the end i really could care what happened to antone in the show, and that made me sad because it could have been really good.   i cant say that the show is horrinble, because i have watched it twice, but i can say that its one what i regret watching anf wont see again. I hope that you may have found this helpful, but dont let what i say stop you, give it a try and watch about 4 episode and f you dont like it by then, then stop because trust me, it will only it worse for you. 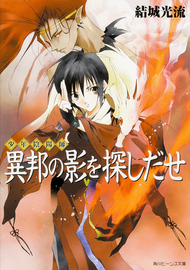 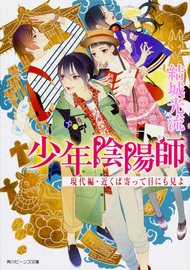