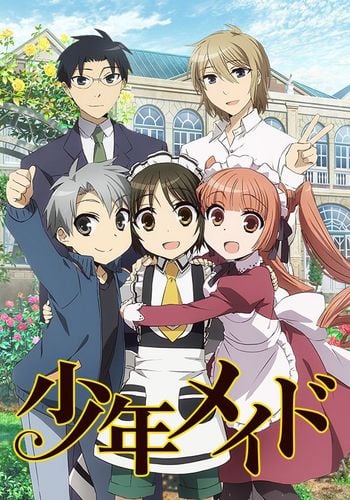 After the loss of his mother, Chihiro is left alone. With no known family left, he has to find a way to move on. Things aren’t looking good until a chance encounter with the young and handsome Madoka—who turns out to be his wealthy uncle! Madoka offers him his home and all Chihiro has to do is clean up after the messy, irresponsible man. The problem? This job requires a uniform—a maid outfit!

Shounen Maid is a Slice of Life / Comedy anime centered around a young boy who loses his mother and goes to live with the uncle he never knew ... and a rich uncle at that. Komiya Chihiro is a very bright, very hard working fifth grader who was being raised by his widowed mother. Unfortunately, his mother passed away and Chihiro didn't have any family (or so he thought) so was prepared to take care of himself. His mother leaves him a letter that he recieves after her death which is basically paraphrased as 'I died, but it'll work itself out. You're a bright kid. You'll be okay.'  For a few minutes there I was rather pissed off at his flippant mother. -_-" Of course, my anger eventually got forgotten by the absolutely heartwarming relationship that began to build between Chihiro and his newly discovered uncle Madoka. Takatori Madoka is the younger brother of Chihiro's late mother. Even though they were enstranged, the fact that Madoka went out of his way to take responsibility for the nephew he didn't even know was something that still makes me very proud of his character. Madoka is a very in demand clothing designer. When Chihiro first discovers his uncles wealth he doesn't like the idea of being indebted to him or rather to anyone. His mother had always taught him about work ethic, in her own unique way, and if you didn't work you didn't survive. So, Chihiro ends up working as the housekeeper for payment of his care. And this is just the beginning of a very sweet, heartwarming, and highly underrated series with extreme family feels. Shounen Maid is, of course, centered around Madoka and Chihiro and the budding relationship between uncle and nephew. However, the series is far more than that. In addition you also get to see the wonderful people surrounding these two and the relationships they hold with each of them. Shinozaki Keiichirou is Madoka's childhood friend, and personal assistant. He basically runs Madoka's life. Ootori Miyako is Madoka's friend who was betrothed to him as a child. She also has a huge crush on Keiichirou and absolutely adores Chihiro when they meet and wants to become like him. Hino Yuuji is Chihiro's best friend and classmate who worries about how his friend is coping with his mothers passing and how he's getting by. Ryuuji is a client of Madoka's who becomes very fond of both him and Chihiro both and pops in randomly to spend time with them. I cannot express enough how very much I've fallen in love with this series and how disappointed I am that so few people have given it the chance that it so richly deserves. I absolutely love the growing relationship between Chihiro and Madoka! Each episode never fails to leave me feeling utterly satisfied with a huge smile on my face. The series has been so incredibly relaxing to watch, especially after I've had a bad day ... it just turns my entire day around! This is the type of series that I want more of! And, one that I will return to re-watch again and again. Definitely a series that I recommend!

This was a really beautiful anime. It was sort of bittersweet; it had its sad moments, but even they were really cute. The characters were all lovable and their character developement, especially Chihiro's was very satisfying. I was crying by the end, but it is such a happy anime, that has the heart-warming message of working hard to achieve what you want, and the fact that you are never really totally alone. 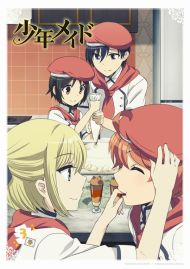 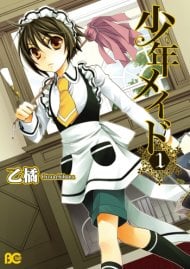