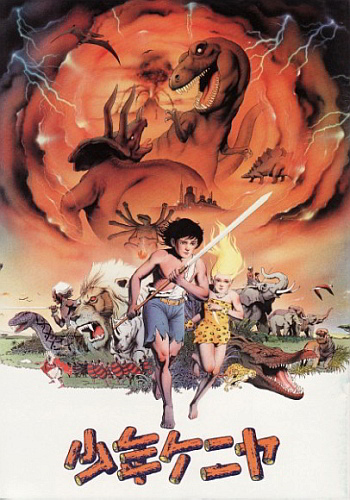 Thirteen-year-old Jackie lives a happy and unusual life with her family in 1964 Kenya, surrounded by exotic creatures, good friends and sunshine. Her brother Andrew and father Arthur spend their time in the bush observing wildlife, but poachers make their lives dangerous – not to mention the occasional charging rhino. When the men witness the death of a mother bush baby, they decide to save its orphaned child, and Jackie finds herself a new companion. What adventures await Jackie and her new friend Murphy?

Nobita finds a lost white dog whom he names Peko while his friends desire an adventure somewhere that still hasn´t been explored during their Summer vacation. After some research the five friends and the dog end up going deep into an African jungle just to find out that Peko has a mysterious connection with their destination.

Kimba the young lion tries to fulfill his father’s legacy: to become the King of Panja’s Jungle. Panja’s Jungle is a haven, deep within the African jungle, where all animals are safe and live in harmony. To restore his kingdom and to protect all of the animals within his domain, Kimba must befriend new allies and survive enemies at every turn…

The battle between the "ideal king" and the "real world king".

This story revolves around the grown-up Leo and his family (childhood friend Lyre as his wife, Rune who is the spitting image of Leo, and Rukkio who is the spitting image of Lyre). In the original story, the ending was quite tragic and brought tears to the eyes of the audience, but the ending was altered to a happy one for this animated film. This change emphasizes the "bonds of family."

A commercial for Ubisoft to advertise the October 27th release of the Assassin's Creed: Origins video game.