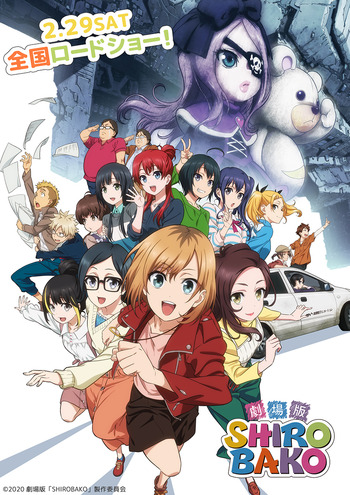 Four years ago, Shirobako offered a season of 24 episodes which examined the wild and crazy world of the anime industry, focusing on the frantic pace and complicated procedures one experiences in creating anime.  Shirobako the Movie goes one step further, featuring the dedication and vision as one overcomes the adversity which tries to derail the anime process.

The movie begins with three oddities.  We first meet Aoi's plushies Roro (the positive bear) and Mimuji (the pirate-girl who is usually views things cynically).  But it is Roro who has developed a sour view of life and Mimuji sounds hopeful and philosophical.  Then a scene where two cars (the white one bearing the markings of Musashino Animation) meet at a red light.  Engines rev, lights turn green.  The red car roars off while the white car moves off slowly as if the driver were after the State Farm discount.  Finally, Aoi enters the conference room of Musashino and first encounters over twenty people gathered at the table, all familiar faces.  Then, with the blink of an eye, only six people are there, many of them unknown.

Musashino after four years has come on tough times.  The quality of their anime is frightfully poor.  Many of the old characters have moved on to other positions.  The cause for this was a terrible business partnership were Musashino's financier broke contract talks and claimed rights to the characters in the project.  All work at Musashino stopped completely.  The company president Marukawa was forced to resign and now cooks his famous curry in a dim restaurant (he still gives sage advice to Aoi).  The reputation for Musashino is that of a producer of garbage.  Aoi has stayed on at Musashino to be the head producer.

Musashino needs a break, and this comes with a movie project SIVA, a sci-fi genre which must be produced in six months, not the two-year window expected for quality work.  And the SIVA project has some connections to Musashino's former partner who might argue over Musashino using anything to help finish the project.  With these problems, Aoi agrees to go for it.

With Musashino's back to the wall, the old characters come out of the woodwork to help in this impossible task with the energy we saw in the series.  The changes in these people are part of the charm of the movie.  Of course, there are the four high school friends who dreams of creating their own anime (Ema, Midori, Misa, and Shizuka) who lend their talents of animation, CGI, and voice acting.  Shizuka is a mentor for the other Seiyuu at her agency, but she still looks for that first great role.  Tarou is still the pompous jerk, but Erika arrives to keep him in line.  Rinko still wear gothic style, but with a little more color ... and she still smacks a softball mercilessly.  KInoshita is still the overweight slacker who must now deal with Aoi.  Sugie is now retired, sports a beard, and teaches animation to kids; but he is still the main man when it comes to animating horses (or in this case pegasi).  Honda still is a patisserie, but the job has made him slightly pudgy (but still quick and agile).

Aoi learns that the role of the producer is chiefly that of bringing the project to completion.  This is the notion of Shirobako, the 'white box' which symbolizes the finished task.  But with the movie completed three weeks ahead of schedule, was the results satisfying?  And if not, will there be a final flurry of activity to make it right?

Shirobako has two musical numbers, the first a show-stopping number featuring Aoi, Mimuji, and Roro as Aoi ponders the decision to make SIVA.  Soon the characters of the Musashino Animation Universe (including the girls of Exodus and Third Girl Aerial Squad) join in an imaginative dance routine.  The second has Aoi and friends explaining the basics of animation to the children in Sugie's class.  Two songs that gave the movie a little more life.

In the end, Musashino is vindicated.  Aoi has a showdown with the company which destroyed Musashino and gained the rights to the artistic properties which will keep SIVA on track.  So many obstacles to overcome, so much resistance to striving for quality.  But, if you know the people you met in the series, you know that things will fall in place.

A few problems in the subbing, other than spelling mistakes.  Shirobako always threw scads of personnel at you, but always supplied name and position as the story moved along.  In the movie, this was offered in Japanese.  Later versions could handle this.

Overall, it was great seeing all the old faces once more engaged in what they do best.  All those quaint personalities, from slackers to crybabies and all the rest, show us the complexities of what makes anime go.