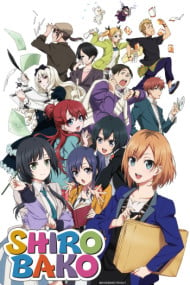 There are many ideas the average viewer thinks about when they are asked what makes an anime work for them. Is it the driving narrative that help to construct the pieces of the story? Is it the lovable cast of characters that help drive the story to its own path? Is it the breathless, but invigorating and vibrant animation that help to bring it to life? Is it the overall palatable visual design that help to give the show its identity? Is it the mesmerizing voice acting and sound direction that help to make it memorable? But what if it's a little more personal than that, taking in account with the people who help make it and how the overall production goes? With so little information, it's hard to know what exactly goes on behind the scenes. Shirobako helps to alleviate this problem by providing the audience with a personal tale that focuses on the industry and the people behind it. Shirobako follows the story of five girls and the struggles they experience following their dream in the anime industry. Their dream stems from their own little experiences of managing an animation club in high school, their hopes and aspirations held up high in regards to their future of wanting to work in the anime industry, not knowing the hardships and struggles that they will face in the near future. Although each have their own set of motivations and paths they set on, the show mostly focuses on Aoi, an amateur production assistant working at Musashino Animation and her experiences working in the industry she sought after. Through her we see the basic setup to Shirobako, in that it's an anime about making anime with all the nooks and crannies that come along with it. From the writing processes, to general animating, to sound production, to editing, and so forth. It shows what goes on in the production with in depth and precise detail, never trying to dumb down its explanations nor barraging the audience with information. Instead, it flows with the backdrop of the story and helps to build and give flavor to the world it's set in. Along with its details on the industry itself, it also gives attention to the people who work to produce it. The cast is immensely large and it shows, as each staff member have their own unique personalities, role, motivations, and backstory that help tie the story together in its attempt to show off the inner workings of the industry. Granted, it does comes off as overwhelming, but each character never particularly feels wasteful or comes across as flat, as they each bring an intoxicating and down to earth atmosphere and overall entertaining dynamic with their interactions. The cast always aim to provide differing viewpoints and details of the anime industry that helps build upon the subject matter and themes that it lays its foundation on. But there's also a more personal story to take away from Shirobako. It isn't just some animated documentary on the anime industry, but rather a compelling character drama that focuses on the hardships of adult life and the struggle of a career in the fine arts. Some characters struggle to make ends meet, some have their aspirations crushed, some never get the break they deserve, some get stuck in the frenetic and tiring productions and lose purpose, some have their own vision compromised, and some just give it all up. While it's not afraid to show the reality of the world, it still maintains a nice, lighthearted tone through its humor and exaggeration. This helps give the series a positive, optimistic and genuine feel to it as it never leaves a certain comfort zone of its subjects to make sure it doesn't get too dark. However, it still manages to give the viewer a general idea of the hectic work they deal with while also driving their own development. It's all there to reinforce the central themes of the series, and feels absolutely genuine and believable in its manner. The animation, art, and sound in general are good, if not great. PA Works once again has the usual efficiency in producing stunning backgrounds, and aims to provide a realistic look to reinforce the backdrop of the show. Animation isn't particularly groundbreaking, but always feels consistent and fluid, never exceeding more than it wants to convey. The overall character design have a rather charming and vibrant feel to them, trying to balance out a memorable and colorful design while adhering to a realistic tone. Soundtrack is simple, catchy, and never feels out of place as it skillfully matches a certain tone it sets in. And finally, the outstanding VA cast comprised of newcomers and professionals help bring their performances to life with a believable and exhilarating spirit to the characters. Shirobako feels like a love letter to the anime industry and it truly shines. From the bustling and frenetic take on what goes on production, the feelings and dreams of the people who work in it, and the love and care for such a niche industry despite the madness that comes with it. Thus, Shirobako's beauty resides in the nature of the industry, not only because of its heartfelt subject matter, but also because of how genuine and relatable it is. 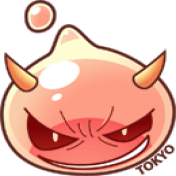 Ever since I notice the series in my opinions it's really good, in fact it's like a whole new level of knowing how an animators job really is (in present time). I recommend people should watch this for themselves and would love to know what your opinions are. :)

There are many moments when watching anime that you are curious to learn what "goes beyond those pixels"."Shirobako" is an anime that can clarify a lot of things for you about that subject.Story The story goes around the life of the main protagonist "Aoi Miyamori" and get some glimpses now and then of her high-school students who are also chasing their dream of making anime from different positions (voice actress,key animator,production assistation,3d maker,writer).I find the plot really weak by dividing into 2 parts between the 12 first episodes and the rest.I believe it lacked potentional conflict while at the same time being too generic with a result being too limited to the protagonist.Well,while it delivers somehow the difficulties that appear in making anime it doesn't suck the viewer like a black hole.AnimationPlease mind that this is an anime of 2014/15.The animation was really neat and sometimes you could really admire the scenery but some character designs of the 5 friends were really dull and alike.In other words it was not bad but at the same time it wasn't excellent,at some moments you really liked the graphics and at the other you could just say "it's okay for a 2014/15 anime".SoundThe sound of this series was also okayish.The main point was that it didn't have any ost that would stuck in your memory with a result for you eventually to search it.The plus were the outros were really nice while the openings were comci-comca.The voice acting was good from most sides but nothing AGAIN extraordinary.CharactersThe characters of the show were A LOT, at the first episodes I was REALLY confused who did what even though there were regular tags beneath them.I find the character development also lacking except for the banal message "keep chasing your dreams" that is kinda cliche for my tastes.Well it delivers the difficulties that you can meet in the industry but nothing that could hook you up.BUT the biggest plus for me of the whole series was the developement of "Shizuka Sakaki" with the slap of realism how difficult it can be for someone to keep up with what wants to chase on the horizon while trying to maintain themselves.I really wished they could have given her more screen time.OverallOverall,this isn't a bad anime but it's not also a good one.I find it mediocre and using it's benefits in the wrong way.I believe if it could use all those positives things in the right way it could shine! 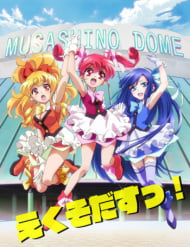 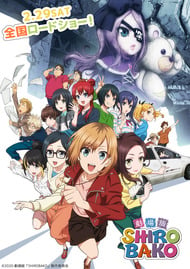 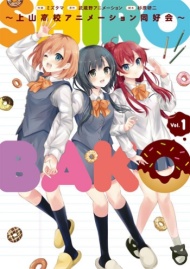