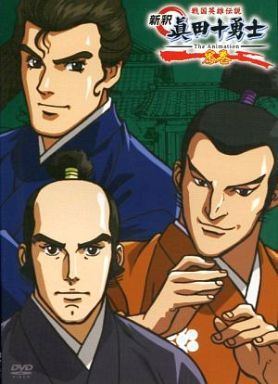 If you're looking for anime similar to Shinshaku Sengoku Eiyuu Densetsu Sanada Juu Yuushi The Animation, you might like these titles.

The Muromachi Shogunate is weakening due to an extended war and the country has entered the tumultuous time known as the Warring States Period where blood is washed away by more blood. In the depths of the deep forests in the unexplored Kinokuni area, the Saika Ikki mercenaries are armed with guns and waving the Yatagarasu flag. Their leader is a foreigner named Magoichi. Meanwhile, a man named Saburou struggles to protect Hinomoto from European invasion. The fate of thes two will lead them both to cross swords with invaders.

Wrath of the Ninja

In the year 1580, a man named Lord Nobunaga Oda sends hoards of unholy armies across Japan, slaying all who stand in their way. A young ninja escapes her villages' destruction with a short sword, one of the three mystical weapons that can end Oda's rule. During her quest, she is joined by two other ninjas who wield the other two weapons of legend, the sacred sword and spear.

Though the Shinsengumi took a huge blow following the Incident at Aburano Koji, they prepare themselves to carry out their devotion to the Shogun, Tokugawa Yoshinobu. Meanwhile, the Imperial Court proclaims the end of the Tokugawa shogunate, and Yoshinobu withdraws to Osaka. The Shinsengumi prepares for battle as well, relocating their station to the Fushimi magistrate's office.

Nobunaga's beloved sister Ichi has married Azai Nagamasa. But the impending battle between the Azai + Asakura forces and the Oda Army is unavoidable. Even a moment's hesitation could cause either side to lose something important at the Battle of Anegawa. It is there that Chidori, who has been saving her tears, will awaken. In this battle to bring the whole country together, there are times where even brothers must fight.

Red Shadow is a ninja who wears a red-and-black costume and a stylized red mask. His adventures take place in Feudal Japan, and he and his ninja sidekicks Aokage and Shirokage fight evil warlords, wizards and daikaiju using modern high-tech gadgetry.