Shingu: Secret of the Stellar Wars 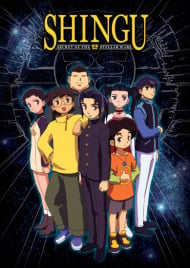 In the year 2070, a giant object appears over the skies of the small town Tenmo, scrambling the electrical grid and confirming the existence of extra terrestrial life. To young Hajime Morata, this news is exciting and new - but to the townspeople, school council members and even the new exchange student Muryou Subaru, nothing going on in the skies is out of the ordinary. For it seems that Earth houses both intergalactic ambassadors and planet defenders alike - at least one of whom can use the power of the giant Shingu to battle incoming invaders - and Hajime is somehow connected. In addition to helping plan school festivals and living his day to day life, Hajime slowly begins to discover the secret behind his town and himself.

This is the first review i have ever written, but looking at all the bad ratings this anime got i had to write something. I really enjoyed this anime, admittedly the English dub is atrocious so if that's what you watched then yea its pretty bad. But the way the one reviewer said it was too laid back in its execution, well that's what i liked about it. Its not a serious anime, its funny, but doesn't go out of its way to be funny. It doesn't go into depth of a middle schoolers angst, but focuses more on just kids being kids and being happy. Then behind all that you have diplomatic aliens, who don't try to be big and powerful just laid back and chill around drinking and doing politics. With some intergalactic intrigue thrown in. <div>The music i quite liked as well. It had the same tune throughout but I felt managed to subtly change it so each time it felt new. Some animes I've seen play the same few measures of song throughout a whole series which drives me crazy, so this seemed refreshing to me. If pure action is your thing this isn't your anime. I felt it told a well rounded story, with characters that i enjoyed, and an ending that wrapped everything up nicely.</div>

One very important thing that I have to say before I do this review: The only way I could watch this was through english dubs, which probably make this anime very very very very very bad. Sometimes english dubs are bearable, but in this anime, I dont even know why they tried. The second super important thing is... that even without that part, it still probably sucks, but I only figured that out after I got half way through the thing and realized that it wasnt going to get better. The end is satsifying if you like the rest, but its a bit corny too. Story: The story, in the beginning, has promise/potential. It looks as if its going to head into an awesome direction (more sci fi action), but soon mellows out and doesnt get any better.  The general mood of the anime is very corny. Its the whole 'lets all have a good time~ yeah~'. The english dubs dont make it any better of course. Animation: The looks are ok. Compared to the rest, this isnt something to dis on. Sound: The intro (song) is super corny and doesnt fit the science fiction at all. It does however fit the rest of the cornyness that the anime glows with. The other audio sucks too. Makes things seem very bland. Characters: The characters are ok if you look past their enormous stupidity and the whole corny 'lets have a feast and talk about stupid shit and laugh while we hide secrets that we think is being considerate, but is actually selfish~ yeah~' The relationship between some of the guys and gals were interesting. Some unique. Some not. There are some good things about this anime, but they are not really worth mentioning. If you still want to watch it after reading my review, then you'll find out, but they are not worth watching the anime for.  The only reason I finished it (although I skipped around the last few episodes) was so I could see how it ended and write a review on it, considering no-one else has one posted at this time. Overall: BLAND and CORNY I didnt expect it to be wonderful considering so many people didnt rate it very well, but it looked interesting and i couldnt help but to try it out.

Shingu is a show practically forgotten today, most likely because it was too laid back in its execution. It not by any means a bad series as far as directing goes, yet it sure feels unexciting in the eyes of the average anime viewer.The basic genres of the anime are slice of life and mecha action, and indeed half the duration is just the silly lives of school kids while the other half is about an alien invasion that is fought back using giant robots and spaceships. Now if you just see what the fans of both these genres expect from these genres, you can easily tell why they would be more than unimpressed with this show. - The slice of life for example is not so vivid with fuzzy/woolly/sweetie feelings to the point the viewers starts to cry like babies. It does not try to inflict you with emotions, no spicy romances, no sakura trees and an allegory around the ephemeral innocence of youth. It looks like an easy going children’s adventure, half the time of which they don’t even care about the alien threat or something. In fact, they barely show emotions. Not because they are emo or something, they simply DON’T CARE enough to worry or cheer about anything. Which passes as dull if you are accustomed to those hyper-energetic kids who want to be the best in the world or something like that. Or teenagers who get angry and yell at everything and everyone. It is very important to be made to care about the cast when it comes to such genres and in this case they are simply… plain. - Then there is the mecha action of the show which is again laid back. When it comes to robots fighting, the average viewer expect blood boiling situations, where you scream and kick things around from excitement for watching awesome lasers levelling huge monstrosities who came to destroy your planet and enslave your kind. And again you don’t get that feeling as the aliens are simply not threatening and the lead robot is not cool-looking. In fact, the action part looks dull as the aliens barely cause any damage and there is always a force field surrounding their ships that vaporises them when they are destroyed without the tiniest shrapnel or debris damaging the surrounding area. That’s not exciting. Neither is the lead robot, which uses simplistic attacks, and it’s actually a little girl magically transforming to a thing that is closer to a golem rather a machine. Again, not exciting.I guess the makers wanted to make the show to feel like a Ghibli film or something like that. And I don’t mean Nausicaa or Mononoke but “My Neighbour Totoro” or “Kiki’s delivery service” type of family-oriented feeling. I don’t know about you but my family would never sit down to watch a series about aliens and robots so I again don’t see how this was supposed to work.What is making things even duller is the soundtrack, which is literally making you fall asleep. Man, this is a story about alien invasions and mysteries regarding ancient civilizations and we get a track of some dull room music that makes even the action to feel yawning. It is mostly piano and trumpet dammit; and not even a sad or artistic type of blend. BLEAH! Not even the production values are enough to make a difference, as they are full of generic character designs, and minimal motions. I can’t blame the colouring variety or the drawing consistency though, as the show was made in a time when 3D aid was not everpresent in tv shows yet. Otherwise they look dull again. I guess not even studio Madhouse was enough to save the show from what it is.The characters are definitely good for their roles and you get to see how enriched they are as personalities if you get past the annoying dull presentation. Too bad that by the end of the series you won’t care to remember them for the same reason. As uncommon as it is for a show that combines slice of life with mecha action, I don’t find much replay value in it. It is simply too easy going and its plot ain’t that complicating to bother revisiting. I personally didn’t enjoy it much either, since I prefer darker stories and more exciting situations. At the same time I must give thumbs up to director Satou Tatsuo, for making yet another unorthodox mecha show (his roster includes Martian Successor Nadesico, Gekiganger 3, Stellvia, and Lagrange). He may have not managed to create a masterpiece but at least it stands out.I recommend checking out Betterman just to see how being made uncommon and with mediocre production values does not make it impossible to get a good show. Other than that, I don’t recommend this anime as more than a (too much for its own good) light watch.And now for some excused scorings. ART SECTION: 5/10 Analysis: General Artwork 1/2, Character Figures 1/2, Backgrounds 1/2, Animation 1/2, Visual Effects 1/2 SOUND SECTION: 6/10 Analysis: Voice Acting 2/3, Music Themes 2/4, Sound Effects 2/3 STORY SECTION: 3/10 Analysis: Premise 1/2, Pacing 0/2, Complexity 1/2, Plausibility 0/2, Conclusion 1/2 CHARACTER SECTION: 6/10 Analysis: Presence 1/2, Personality 2/2, Backdrop 1/2, Development 1/2, Catharsis 1/2 VALUE SECTION: 1/10 Analysis: Historical Value 0/3, Rewatchability 0/3, Memorability 1/4 ENJOYMENT SECTION: 1/10 Analysis: Art 0/1, Sound 0/2, Story 1/3, Characters 0/4 VERDICT: 3.5/10 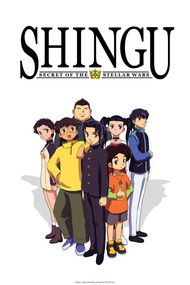