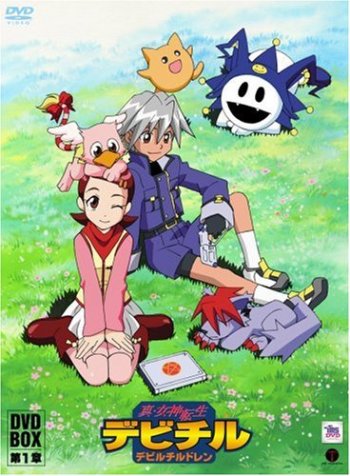 Watch if you like Monster-of-the-Week with at least decent characters and monster.

The story is a hotpot with a huge portion Digimon, a bit Dragon Quest and a pinch of early 2000s Shounen.

Boy with special genes or something gets told he is one of the "Devil Children" by a "crazy professor"-archetype and he gets to go through portals with the "tomboyish but cute girl"-archetype to fight the Devil and Digimons monsters who got turned evil by said Devil. The other world of the monsters look like Digimon Adventures. The evil monsters schtick was something from Digimon.

But it works. It's something we all have seen before, but if you don't mind the repetition that monster-of-the-week brings with it, you'll enjoy it. The execution is just solid.

It looks like a more polished 2000s Shounen show. The design of the characters is nothing special, but the monsters are designed very good. It's cute Persona monsters after all. And like already mentioned: the backgrounds draw huge inspirations from Digimon season 1, so they are also solid. The animation is standard, but not bad.

It's meh. Nothing that's bad, but just meh.

The kids characters are once again solid. Shounen MC archetype and tomboy-archetype. Not annoying, but forgetable. The monsters are enjoyable, though.

It's fun. Nothing fancy, though. If you like the characters you'll like the show. It's an older Persona-game for kids.