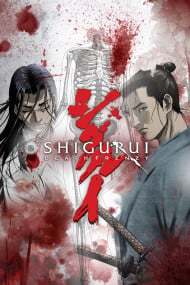 StoryIn the Japanese New Wave, films such as Hara Kiri and Samurai Rebellion depicted bushido as a baseless sham and the feudal system as corrupt, cruel, decadent, and crushing people underfoot. They exposed all the supposed nobilities of the era for base lies covering even baser men. I sound terribly pretentious, don't I? Good - because so is Shigurui. This anime takes the same blatantly pessimistic view of feudal Japan and adds in the process excessive amounts of highly disturbing violence. Allow me to stress that: Highly disturbing. Shigurui is chock-full of savagely graphic acts right from the outset so you really must be looking for that sort of thing if you're to enjoy this anime at all. If you thought Elfen Lied was too disturbing for you - heck if you thought Elfen Lied was disturbing - then pass on. Limbs are cut, body parts are gouged, intestines come pouring from stomachs, and I'm opting not to mention the actually disturbing things in this review. Rather unpleasant, got that? Anyway, I'm hardly suggesting that Shigurui is as nuanced as the films I compared to it - in fact it is insanely absurd. Past the ultraviolence is an aggressively morbid environment where the worst case scenario is the only option and samurai can perform superhuman feats of virtuosity (like so many of their anime counterparts, only these ones will leave you choking in revulsion). For all the absurdity, however, the tone remains deathly serious and the pace is grimly deliberate. Stylistically this is an effective choice, adding seeming depth to a relatively simple and overblown narrative. Now there are some rather noticeable flaws in plot progression. We start off as the story-so-far, then enter an extended flashback that comprises the rest of the series and we wind up getting no ending for the set-up in the first episode or the events in the flashback. Still, I left rather satisfied - the finale brings things at least to a thematic conclusion.AnimationUgliness has never been this beautiful. Shigurui is gorgeously animated, composed and framed. The use of focus is delicate and measured; striking images include the diagram-like depictions of the human body and insects lazing about in the foreground. The colour palette is astonishingly grim -this is a wonderfully and morosely dark series even when just looking at it, a perpetually overcast Japan that suits the material. It goes without saying that the ultraviolence is splendidly realised - raised almost to an art. I found myself marvelling at the skill behind scenes that made me want to throw up. The only criticism I could bring is the heavy reliance on still frames, but even then there are so many subtle movements that I would consider the animation rather exceptional - also, I considered the use of stills quite stylistically effective. Visually while this owes much to the director's earlier series Texhnolyze, Shigurui has surpassed that work aesthetically.SoundThe music selection is simple but inspired: traditional instruments - Japanese and otherwise - backed up with occasional recourse to classical strings and deep Buddhist-esque chanting. Aurally this keeps up the self-importance (no pop ballads for this anime, no sir). A fatalistic air of inevitability is lent to sword-fights through the music - it's as cheery as a dirge. Voice acting is unmemorable but hardly overtaxed.CharactersOne thing that frequently bugs me about other disturbing anime - Elfen Lied, Gantz - is that there's a ham-fisted attempt to make the characters seem sympathetic. Be it the precociously cutesy moe-blobs in the former or the self-pitying speeches in the latter they evoke from me an eye-roll at best. Nothing of the kind is tried for here. As I continued to watch it dawned on me that everyone is scum. Irako and Fujiki may be rivals but at different stages in the series they each perform acts so contemptible as to remove any shred of sympathy you may have had for either one; though truthfully the whole bunch are nothing more than exaggerated caricatures of samurai honour and depravity (which go hand in hand). There can be no heroes among the warrior class, just different levels of rotten bastard. The most obviously evil figure is also the one that makes the most lasting impression: Kogan. Debauched, senile, insane, a brilliant swordsman, a rapist and incontinent, Kogan is so staggeringly monstrous in appearance it takes a stretch of the imagination to consider him human. As the head of the dojo where the samurai are all killing each other, he is the sick, warped soul of everything that is wrong with this society. He is the mad emperor who has everyone at his beck and call, able to meet out whatever twisted act he wills - and none can punish him, if anything they all seek desperately to remain in his good graces. There are a handful of people who are not scum (i.e. women) and it's fair warning what happens to them is still pretty horrific... so those looking or expecting Shigurui to be a comeuppance fest for those who so richly deserve it will be disappointed. That said, their torment is played for horror rather than sexual gratification unlike, say, Mnemosyne. While one is more likely to reach for a bucket than a kleenex, these poor wretches are reasonably sympathetic - victims of their male-dominated environment. Simply put these characters are shallow and viciously ridiculous but, in this kind of exaggeratedly perverse depiction of the samurai era, they rather work. Kogan in particular is a villain I won't soon forget.OverallThis is the quintessential cult anime. Many viewers will be alienated by this bleakly misanthropic gore-fest - however, I do recommend this to those who feel they would actually enjoy the experience. I found myself completely horrified but eagerly awaiting the next episode, and in the final analysis Shigurui is easily my favourite blood-and-guts anime. Enjoy, brave warriors - and bring your vomit bags. 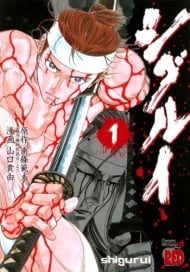