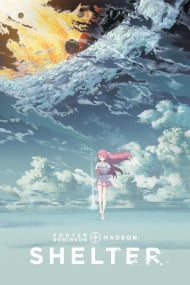 It's rare that I give anything a 10 nowadays, but Shelter deserves a 10 for for being one of the best animated music videos I've seen in a while. If I compared it to a full-length series, it might have scored lower due to it lacking things that I would expect in a series or even a full-length movie. However, as a music video, it has very little time with which to work, so I am basing my score off of this factor.  Let's start with the storyline. The story starts with Rin, the main character, in her virtual reality bedroom, creating mountains, trees, the aurora borealis, all with the touch of her tablet. I would compare it to a virtual reality minecraft with far more realistic graphics, except Rin seems to live in this world. She never leaves. And then, the story goes on to explain why she never leaves in one of the most poignant montages ever. Yes, there is a cliche here, but frankly, Shelter manages to make the cliche its own.  Now, the animation is really what steals the spotlight here. A-1 Pictures manages to blast my expectations and give a wonderfully animated music video. The colors, the creativity, the movements, everything is crisp and moves without jarring. There are some still shots to set the pacing, but I actually didn't notice them until my second run through of the video. Since this is a music video, obviously a lot of the score has to be determined by the song itself, and how well the animation relates to the song. The song is slow and sweet, with a hint of melancholy. It helps that the song hit the tops of the chart when it released in August 2016. A mix of Japanese and English, the song is very easy listening. The other part of the sound, is the voice actor for Rin. Sachika Misawa portrays the 17-year-old's lonely but hopeful attitude rather well.  With only one speaking cast member, it's difficult to judge the character portion. Especially since the length of the music video does not usually allow for character development. HOWEVER, this is not the case with Shelter. Rin is able to grow and find hope in her situation throughout the music video. I also felt that Rin's father was given a lot of characterization for a man who never spoke.  Overall, go watch this. It's 6 minutes of your time, and if you don't like it, that's ok. I loved it

The recent flavor of the week is Shelter, a music video that resulted from a passion project. It’s nice to see passion projects coming into fruition but I am not going to give it a pass just for being one. Misty Chronexia is a passion project as well but it’s not exactly something to be thrilled about, is it now?Shelter is nicely animated, and I am again not going to give it a pass just for that. Pretty colors can go fuck themselves if they are a self-purpose instead of dressing for a good story and well written characters. Something which you will of course not find in a 6 minute music video because of time limitations. Everything is void of content and serves simply as emotional pornography. There are only two characters in it and we know nothing about them. As for the crumbs we do know about them, they work against the credibility of the whole project if you think about it logically. One is a lobotomized cute girl trapped in a videogame, and the other is her father who loved her so much that he put her there, so she will spend her life alone and miserable. What a great father. By the way, this is a music video which means the music should be the thing that stands out the most. And guess what, in the contrary it’s easily the weakest part. Completely average and forgettable. So what we eventually have here is a cute girl doing cute things while escaping reality by playing a videogame all her life. It’s like a love letter to all gamers and hikokomoris out there. The attempt at drama by having a plot is laughable at best since it doesn’t lead anywhere besides creating victimizing for the emotionalfags to be crying over a character with zero personality, just because she is cute. Wanna bet it wouldn’t work if she was a fat middle age man? Bottom line, it’s not good, it doesn’t deserve the hype, and it’s yet another product of the terrible modern era we are going through.

Speaking without Bias for the songwriter, this short story tells a Beautiful story that requires a few replays to understand. The Animation is done beautifully, with collaboration from crunchyroll and A-1 animators. The animation is top grade, which beautifully blends watercolor brush strokes with sharp computer generated colors, adding brilliant contrast. The sound is truly art, with the Anime focused soley to enhance it. Even with only 2 characters throughout the entire story, with only 5-6 lines of dialogue, they are made perfectly to tell the beautiful story that is both Heartbreaking and heartwarming at the same time.