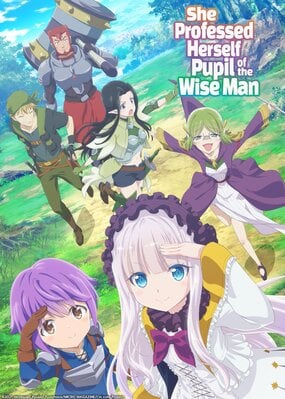 I have seen this show get dragged across the mud for various reasons. I've seen some go as far to say it's the worst anime of Spring 2022. For the reason, I was curious and across 3 days started and completed the series. My conclusion? I don't think it's as bad as some. Don't get me wrong, this series has some major flaws, but it wasn't the trainwreck I anticipated.Quick Synopsis: Danblf, known as the all powerful "one man army" has lost his sage-like appearance and is now a small girl known as Mira who isn't taken all that seriously. He (or she) now has to not only regain a lost reputation, but now find all the other 8 wisemen as well, while defending the kingdom and surrounding areas.First let's talk about the bad: Some characters, like Flicker in particular, are creepy and useless. The "whole wise man gets turned into a girl" premise is creepy as well. I'd say the creepiness isn't as bad as some other series (Assassin's Pride for example I had to stop at Episode 2 becasue of how creepy it was), but it's still a negative.The other negative has to be the animation. I must say, the animators must've been on a budget because I've never seen a series use this many still frames. I'm not just talking about background characters or those who aren't in the middle of speaking either. I'm talking about how the frame will be stuck on 2 characters for up to 5 seconds, usually at the beginning of the scenes and even the middle of the scenes. It bugged me a little, to the point I got distracted from the events of some of the episodes.The humor of the series can be iffy at best. The salamander scene where Hinata's cute salamander is triumphed by Mira's behemoth dragon-like one? That was funny. The pee jokes that are prevalent in more than one episode? Not funny.Now some postitives: I thought the actual premise, if it weren't for the creepy element, was interesting. A hero who has been essentially awoken from a long sleep has to convince those of his powers? It's a cool synopsis. I like the adventurous aspect, where our main character, Danblf or Mira or whichever name you want to use, essentially meets new people in new lands, some of which are old friends who don't recognize her, and proves her powers as Danblf to them, without revealing her original identity. There were some heartwarming moments as well, such as Zef getting to talk to his deceased sister through the Mirror of Darkness, and Tact, a young boy who thought his parents were dead after not seeing them for years, finds out they are still alive and now has a purpose to find out where they are.In general, I thought this series was okay. I admittedly came in expecting it to be bad, and it surprised me a little. The humor is very hit or miss, the storyline is as well, but I think you could do worse. This series has some things going for it. The setup for a season 2 is very intriguing, with 7 of the wisemen still not encountered. Would I watch a season 2? I would. If this series removed the potty humor and toned now some of the creepier elements (such as characters like Flicker) it would score higher.

I’ve read bit of manga before. My expectations were low, but man. This is bad. The story is trapped in the videogame with the twist the protagonist gets trapped, when he is playing with the character model. The first episode goes over the part in very nonchalant way, which has no dubbing. Yes, the main character wakes up in the new body. The music is playing over few scenes and the episode ends. Twist is MC was playing as this old wiseman summoner, like Gandalf or Dumbledore style, but he is now trapped in young girl’s body. Even the character name is similar Dunbalf. So, he uses old man’s pronoun and other such things in Japanese despite being cute young girl. It doesn’t translate to English anyway. Other players are trapped in the game as well for some reason. It does have the trope of getting trapped in the game after many years pass inside the game for no reason. It’s very similar to Leadale no Daichi nite or very superficially to Log Horizon. The story is mostly whatever adventure, but there is something about hordes of monsters increasingly appearing. The summoner thing is broken, because on one hand there are long incantations to summon things yet the high-level summoners can just almost instantly pop dark knights or just their hand with swords. Moreover, the main character isn’t just a summoner, but has some monk skills as well. Honestly monk class would be so much more fun to watch. The summoning is rather unexpectedly boring. Did I mention that summons are mostly CG. The enemies are mostly CG as well. It doesn’t look good. The series has the “washi wa kawaii” trope. There are cute moments in the series, but overall, it’s very lacking. The issues that are overlooked in Leadale no Daichi nite are same. I do not recommend the series.

So is this show a video game isekai like Log Horizon? I have no clue. I feel somewhat sad that I didn't enjoy this show because I enjoyed some of the director's (Keitarou Motonaga) other projects like Jormungand, Persona 3, and Date A Live. Plot/Rant: Theres an old wizard named Danbalf in the video game Arch Earth Online, however what confuses me is that the guy controlling him falls asleep for 30 YEARS while trying on a new character design and it changes his appearance to a female child (with a posh british accent dub).  HE WAS "GONE" FOR THIRTY YEARS, yet the description said its a video game they don't clarify this at all if this world moves faster than our world or if he got sucked in and came back to life after 30 years, they briefly show the head of some guy controlling Danbalf on a computer its not an actual VR. Anyways, the show is boring, theres a recurring character that shows up in 3-4 episodes in a group of adventurers who is in love with Mira and she is so annoying. The only good episode was when she helped a summoning professor get a good score in a competition. The fights were "eh." the final battle was a CGI dumpster fire.  To sum it up in ways most people will understand: I had more fun watching Pupa than this. 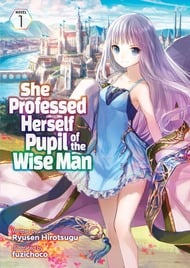 She Professed Herself Pupil of the Wise Man (Light Novel) 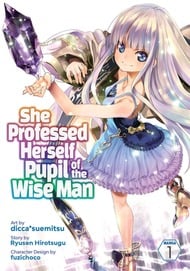