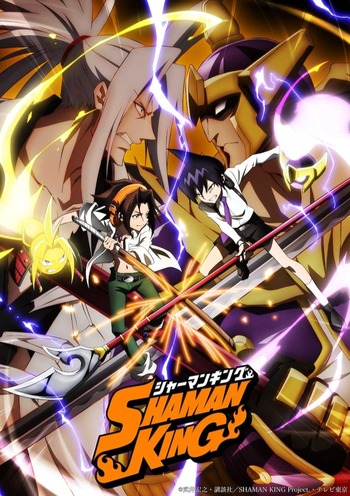 Shaman King is my religion

That's just not right. Episode 3. There are some things that cannot be redeemed ... like kiling a person, that is something you can't come back from. A character (Cheap copy of Bruce Lee) was killed for that girl and after 5 mins, it's all okay as if it's nothing ever happened.

NOT WORTH MY TIME

The story is face-paced, but I guess they did it with the assumption that people also watched the 1990s Shaman King. The animation is so much better and the action scenes are amazing. But what stood out about this anime from the 1990s Shaman King, is unlike the previous one, the ending was PERFECT! It didn't leave you unsatisfied and wondering, what the heck? It was absolutely A+ Despite all the quirks here and there, I would watch it just for the aanimation and the satisfying feeling of the ending itself.

Before covering the anime, I will start by saying that yes, I did read the manga. It was during the 2010s, but better late than never I suppose. Then again I did grow up with DBZ and Yugioh, so I think I always had a soft spot for Shounen Jump.

But needless to say, Shaman King(2021) was one of the few anime to give me burnout, with me stopping at episode 10. Even after coming back to it months later and continuing only a few more episodes, my feelings have remained unchanged. Cause no matter how you look at it, the rushed pacing is what hurts Shaman King the most.

Story- The story is about a young shaman named Yoh, actually starts off rather simple, when he meets a kid named Manta. What starts off as simple encounters with other characters like Ryu and Ren ends up becoming more complex when the Shaman Fight is announced. And every character entering the fight has their own dream/reason they wish to achieve, since becoming the king allows you to have your wish granted.

There's also the nature/spiritualism theme that is a part of the series, as well as the mostly positive/negative side to human nature. Which is no surprise since Hiroyuki Takei, the mangaka of Shaman King, was influenced by Osamu Tezuka. Which I'm fine with actually since Takei did a good job following up on the themes.

The problem however is how the anime handles the source material. When studio Bridge intends to adapt 35 volumes(which is 8 to 10 chapters per volume) into a 52 episode anime, you just know the story is going to be rushed at parts, or content cut out. When I found out that the story part with Horo and the Bear got cut from the anime, I was actually pissed since Horo is one of my favorite characters.

Sound- The sound is pretty good. And I think I heard somewhere that some of the original voice actors from the first anime came back.

Characters- The characters for Shaman King are pretty good, well established with their own personalities and goals. Horo has always felt cool, with his hot headed personality and his snow board. I also enjoy Anna, seeing how she helps to balance Yoh a bit and make him more driven. And Yoh I think is a pretty chill protagonist, he's different but in a good way. He's not motivated by power or fame, he always remains calm, and its the simple things that make him the happiest.

And yet I feel like the way the story is being handled is affecting the characters, holding them back from being presented in the best light.

Overall- For people who have not read the manga, they are the ones who will get the most out of the anime. But even then, I think some of the veteran anime watchers will get annoyed by the pacing/cut content. And I think that its fine to enjoy the anime as an introduction. But I can't very well do that since I'm one who reads source material first most of the time.

So for me, I feel like the anime is a sorely missed opportunity to give fans a good adaption of Shaman King.