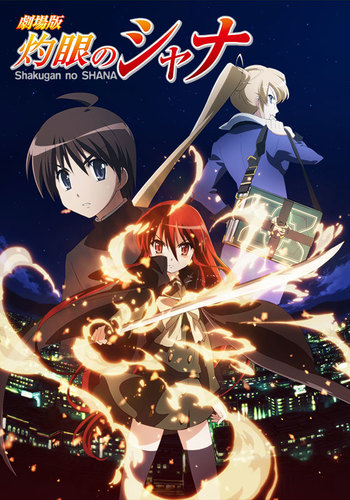 I can't help but compare this to the show, me having watched that first (which I rated 5 stars btw), and this doesn't measure up, not even close. What this is, is the taking of the first three episodes and then adding a big major battle at the end. The movie packed in as many characters as possible with little development. For me, it was pointless, and I wish I would have spent my time starting season 2 and bypassing the whole experience. It contains meaningless scenes and characters that amount to nothing in this self-contained movie. What made the show was the progressive and humoruous relationship between Yuji and Shana, along with her slow, yet steady, understanding of human emotion. Instead, this lacked both, and Shana simply remained confused and distant until maybe a hint at the end.

I have to agree with the many others who have already posted after watching this I dont think it makes a whole lot of sense. I do however feel they went a different direction. I can say that I didnt hate watching it but I did like alot of the things that they did. different isnt always bad its just different. Sometimes you have go into these things with an open mind and just take them as they are. Even if the characters dont seem 100 percent the same. The creators are trying to keep it interesting and some what fresh and new.

this movie doesn't make sense if you saw all the series, and the story id different from the first series, it kinda suck

Ok after watching the first season this movie really sucked in comparision. First off there was no reason for the girl that likes Yuji to be in it since she doesn't do anything. It was ok to have in it during the part at school but when they show her at her house it is pointless. It was kind of funny how the girl with the big back pack was on the TV all the time but that was also pointless. There was no development of Shana's personality at all. She had no reason to care for Yuji and when she got hurt I didn't really care that much. In the actual show I cared a lot. All in all this movie was sort of lame and didn't feel the same. There were cool fight sceens and the animation was awsome but the story was bad. The only good part of the story was the part that was exactly the same as the show which was the very begining of the movie.

Having seen the entire series prior to this, let's do a short review from a few different angles. Keep in mind the movie is a "recap" and doesn't bring anything new to the table.

If you have never seen the series: This is a decent option to get an idea of the first season, but you won't capture all the details or relationship building that required the original 4 hours to cover. You can expect the movie to cover the first 3 episodes pretty heavily and it give you some sense of the events that unfold, but it is very front loaded and it covers a tiny bit of the events in the middle, and of course spoils the ending. Only watch if you wish to preview on whether or not you want to watch the series.

As an individual movie: About average, you got your story intro and partial character building which ultimately lead up to some events and the primary battle. It won't capture the characters well enough to build that emotional connection to where the ending is all that satisfying. The individual movie component really doesn't fit the series though or work well for it due to the audience connection and backstory required which makes the actual entire series one of my favorites.

Those who have seen the series: You won't find anything new to offer. It is a recap as mentioned and there isn't any additional reason to watch it. This might at best serve as an alternative to watching season 1 if you were planning to do a rewatch of all the seasons. It doesn't capture the best parts of the season and spends too long with the intro portion with the better parts being cut short.

I recommend just viewing all seasons, starting with 1 as the anime itself is excellent with the all popular tsundere, Shana, and plenty of action and story throughout.

Rating will be neutral as it is tough to give an accurate rating having viewed all seasons, so it is impossible to not be biased.

This review is part of the Secret Santa 2016 Event.