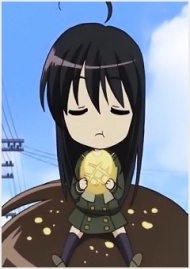 Shana season 2 specials (3 episodes), AKA Shana-tan season 2. I never watched the original Shana-tan. Animation and sound are on par with the normal series, except there’s tiny ‘chibi’ versions of certain characters like Shana and it seemed at times like the pervy ecchiness level was raised a tad. Oh and it’s only available in Japanese. This is supposed to be some comedy, so let’s see if Rie Kugimiya’s voice ruins my fun here. I just watched the main anime (season 2), so I’m in a slightly positive mood. Being a special of an anime I’ve already reviewed, I’ll leave out the animation, sound and character sections that I usually have in my reviews. Story (& Characters) So… in each episode, the scene transitions show off each of the characters in various costumes, often chibi-ified. I can’t recall what there was for the first episode, but episode 2 had insects and episode 3 was frogs. Nothing horrendous about the insects one, but for the frogs one, they gave the Kazumi Yoshida frog, boobs. Eww… Just imagine a frog with a girl’s face and boobs. I don’t even think creepy furries could tolerate that. Oh and Bel-Peol is a snake for some reason in the frog one. Occasionally it was a tad funny, but most of the jokes went over my head. Not like I don’t have a sense of humour, I laughed my head off in anime like Kare Kano, Lucky Star and Tsukuyomi Moon Phase. Some things just didn’t make sense. The first thing was that Yuji was looking for Sato’s house, but running around, he’d always come across some other place. I didn’t get that. Is this somesort of exclusive Japanese humour? I will admit, Shana being tiny and constantly munching on melon-bread, even using throwing the melon bread was kinda adorable and slightly funny. But other than that, I couldn’t stand her. Travelling via Yuji’s head (because she’s so small) meant she often planted her sword in his scalp (no blood?) and sometimes pulled his hair out when she got mad at him. Just made me hate her even more than I already did, because she’s a bitchy tsundere character voiced by Rie Kugimiya. I tried to give it a chance, I really did, but I just couldn’t bring myself to enjoy it. She even calls Kazumi ‘ちちのばけ’ translates as breast monster. Is she so fucking obsessed with her lacking chest? Kazumi herself actually provided quite a few laughs, particularly due to her change in voice tone and demeanor, she was a more serious pissed-off character in some scenes. What was especially funny was the parody redo of Ike’s confession, where she is bursting to go run off to Yuji and ignores the confession calling Ike a loser. Kinda sad for Ike, but it serves him right for trying to complicate the already BS love triangle. I’ll also add, there’s a few more kinda ecchi moments. Shana does a short scene where she’s describing Yoshida. OF course her hand gestures from the chest imply big boobs (even though they aren’t that big), but then she also does the same gestures from her crotch. Considering the context, that is just plain wrong. One kinda interesting, even if it’s slightly cringey and annoying, was the scene were Sabrac was in an adult bar. It reminded me a lot of Maka’s womanising father from Soul Eater. Bel-Peol is the boss and works at the bar, while the waitresses/hos in skimpy slutty attire are Wilhelmina and Margery. Bel-Peol is the surprising voice of reason, telling Sabrac to get out, since he’s married and his wife would worry. All the while the other two, in Sabrac’s arms spur him on with his bullshit, he makes a gun=dick joke after Margery provokes him. Now in the right context dick jokes can be funny, but here I didn’t even crack a smile. Maybe drunken Sabrac is bad at dick jokes. There are some minor references too. There’s one scene where Hayate no Gotoku is referenced, Shana is replaced by Nagi with her blonde twin-tails and refers to Yuji as Hayate. Funny thing is that the impression is on point. Probably has a lot to do with the fact that Rie Kugimiya also voices Nagi and that Shana and Nagi are the same bitchy tsundere character trope. I think they might have even referenced lucky star as they mention summer is over because ‘Comiket’ just passed. Though it could be a Hayate no Gotoku reference (I stalled at 20ish episodes) or Comiket may just be an actual real life convention in Japan. There’s also a reference to A Certain Magical Index (To Aru Majitsu no Index), featuring the chibi mini Shana-tan squaring off against a guest cameo of Index-tan (there were also specials of that anime, the same as this). They even mention the fact that the two animes were made by the same people. Conclusion After all that, is it worth your time? Even though it’s not that long, I’d recommend against it. Especially if you hate ‘anime BS’ or don’t get a lot of the humour. Or if you’re like me and you can’t tolerate the voice of Rie Kugimiya, then the same. Otherwise, it’s a coin-flip. You might enjoy this, you might not. These specials have nothing to do with the main story so you aren’t missing out. I’m now wondering if I’d enjoy this if it were in English. Probably not, so it’s not to blame on Rie Kugimiya’s annoying voice. I didn’t like it, but it doesn’t necessarily mean you won’t. Even though it’s short, I’d recommend playing it safe and avoiding this special. Though when it comes to specials, this is one of the better ones, there are much worse. Score-wise, I decided to give it the benefit of the doubt here. Family-friendliness Rating: 4/5 Some proper weird shit (lower is better) Overall Rating: 5 /10 (higher is better)

Nothing special. Some short clips within a clip that are somewhat funny or do a comedy type description of some terms from the anime. Usually these involve a chibi character on someones head.

Story: little crazy and funny Animation: and for the specials that where on the Blu-Ray disk it was more like DVD format Sound: spot on with the sound Characters: love them all 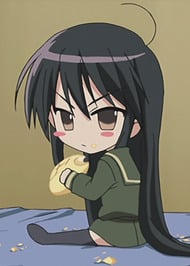 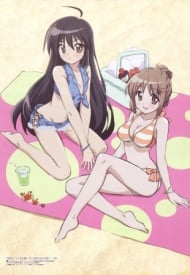 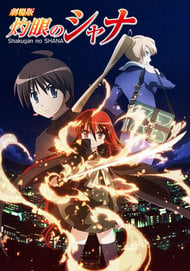 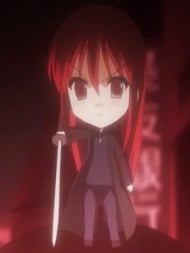 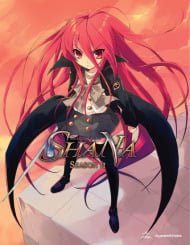 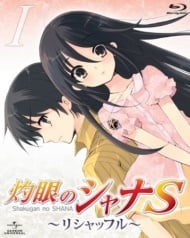 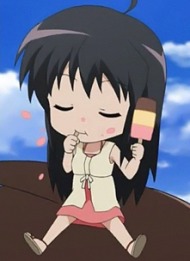 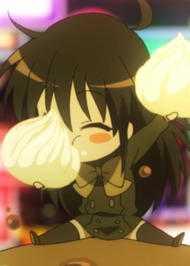 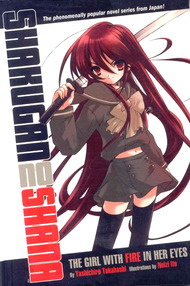 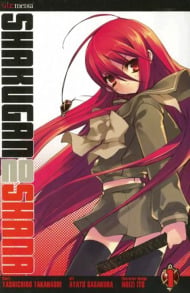 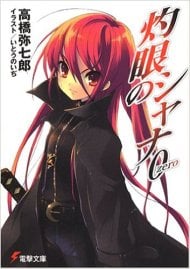 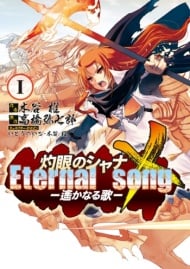