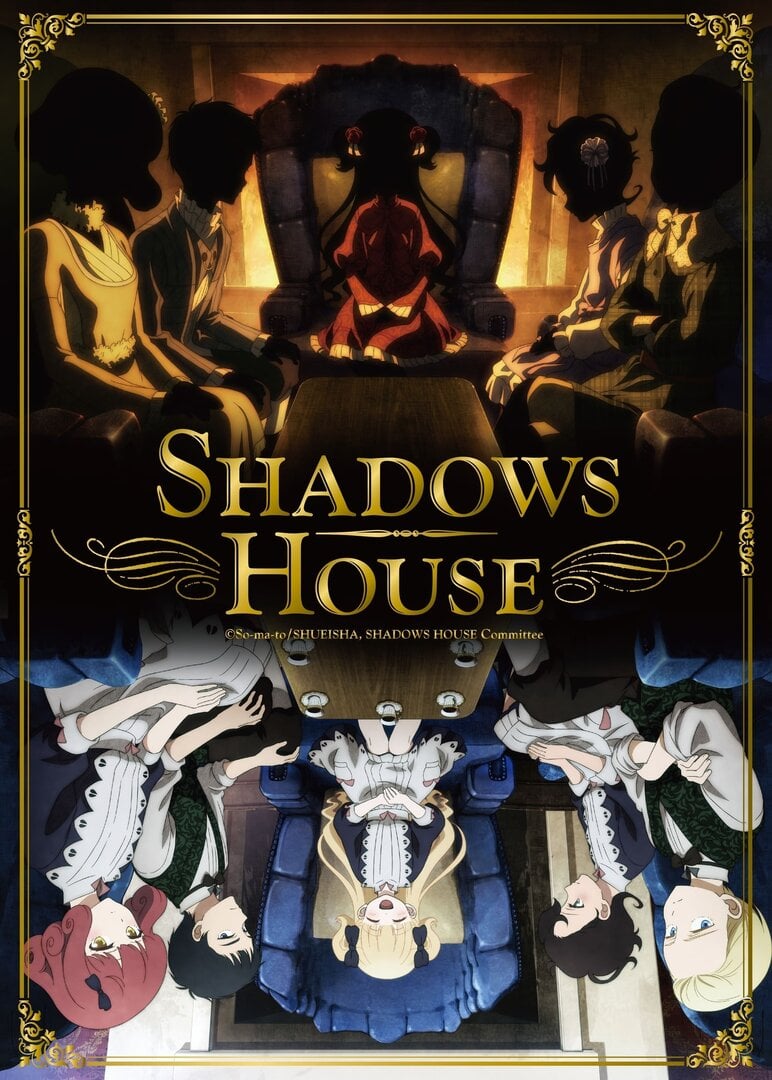 Imagine The Promised Neverland, but just the first season and a lot more well thought. This is Shadows House.

It pains me that someone already added a review to this anime. Not to be dramatic, but this is one of the best things my eyes have ever been exposed to, and I really wanted to be the first one to tell the world about it. Oh well, now I think the only thing left to me is to just hop into this review already.

First off, I will start talking about the story. I have already read the manga but don't worry, I will keep this spoiler free. Here we follow Emilico, a living doll whose only life purpose is to be the face of and serve her shadow master, Kate-sama. That's because these shadow masters are beings whose bodies are entirely black, but who have the same silhouettes of their dolls. The living doll's faces are the only way a shadow can show their emotions, the only way they can be complete. Quite the strange premise, right? But trust me, that is just the tip of the iceberg. At the beginning of the story, you are going to be confused, left completely in the dark, much as our protagonist Emilico. It starts a bit slow, just fuelling your curiosity, adding suspense and making you think "there might be something weird going on here". But as time goes, you will discover that the world of Shadows House is much more complex than it seemed when your horizons were still limited by the walls that surround Kate and Emilico's bedroom.

As for the characters, Shadows House has plenty of good ones. Emilico is a bubbly girl who cares a lot about other people, but who is very clumsy and has trouble fulfilling her role as a face. If you are like me and don't really dig this type of character, don't worry, Kate is there to be your more proactive and intelligent protagonist. They make a good balance of goofiness and seriousness and work really well as a duo. There are also some great side characters, two of them go through amazing character development and really will make you go from hating to loving them. Some great villains and all that jazz.

Just to wrap this up, this anime has decent animation. It gets good when the scene calls for it, but nothing exceptional most of the time (as expected from CloverWorks). The soundtrack is also good, and the ending is superb. So, should you give this anime a chance? Absolutely. Even if you are not a fan of horror or mystery, don't worry, it's not THAT scary, and it still has some pretty funny and light-hearted moments! I love the manga and this is a great adaptation, it's a 10/10 for me in terms of entertainment.

Yet again the spring has hit us with a gem hiding underneath the rocks. Most people would see this and just pass over it but really shadow house is with the time. Vibrant and fluid animation, unique characters dynamics, an incredibly interesting story and amazing music too boot. Shadow house really does shine amongst so much of the rubble that's spring 2021. Still give it the old 3-4 episode try and only if you hate the characters would I say drop it others wise your In for a pretty fun ride. That's the short one now to a more detailed spoiler free review.

yes the animation is great and is again proof that animation quality is getting better and better and this shown beams quality.

Next is the sound yeah the EP absolutely slaps, and the audio from the show is really good and immersive. They did a great job.

the story although takes a bit to long to manifest does show incredibly promise for a season 2 and alone is enough to satisfy anyone wanting a bit of a mystery/thriller itch. Before I wrap it up I'd have to say that remember anime's really can't be a great thriller and the horror tag for this show just isn't correct it's not scary (at least not now) but should the show get darker as it continues to a season 2 the potential is there to be a genuinely Erie show. Other than that it's worth your time and I hope you enjoy! That's it for now thanks for the read and have a good one!

i remember coming across this series in this site and finding only one review- it was positive ofc so i started watching it. ngl, the first few eps were kinda boring and i thought bout pausing the series but oh my god am i glad i kept watching it. both the op and the ed are so catchy and they completely match with the show. the characters so very well written (shout out to john-sama the best boy ilysfm) the art style is really really pretty and the animation is literally on point. the overall base theme of the show is suspense-drama which are my preferential genres. im looking forward to kate-sama's background/past stuff and soooo hyped for s2 (if at all it is planned) and im most prolly gonna read the manga rn. (also i rated characters a 9 bc i found emilico way too bubbly and kinda not-using-brain but im looking forward to whats in store for her charcater) anyways this is such a good show, i suck at reviews but its definitely worth the watch xx

This anime was a bit disappointing to me because of how little progress was made in the plot, stuffing the last 2-3 chapters with filler and leaving things very open. I guess they didn't want to risk too much and just decided to advertise the manga, considering that it has more than 100 chapters in progress.

Story: It took a while to get interesting and hooked until chapter 5-6.

Animation: Very well detailed both in backgrounds and aesthetics.

Sound: Maybe I'm very picky here but I didn't like the OP (Cowboy Bebop flashbacks) one bit and the ED with the vocals was decent.

Characters: The strongest point and the reason why I kept watching until the end. While Emilico is a ray of sunshine and Edward was intriguing at first even though he degrades down the stretch. The characters that really take the cake are:

- Sean: the most understandable and analytical character on the show.

- Lou: despite being stoic and appearing relatively little with others. She was very lovable, funny, and had a nice little character development.

- Ricky: the most underrated character of the show. I have rarely met male tsunderers and this one I really liked his personality a lot.

-Jhon: despite being a clumsy and airhead, he was the funniest and most loyal character on the show! I loved his chemistry with his servant Sean.

I really wish they had adapted more content from the manga, as well as improving the pacing and extending the series up to 24-26 chapters. I also plan to read the manga later.