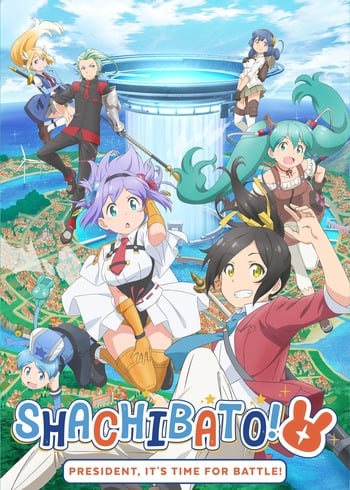 President, It Is Time To Stop!
A young man stands in front of the tremendous gates and carefully reads the message of his father. This place is the center of the world, which is also called Gatetoria. Before that, however, there had been nothing but vast wastelands. At that moment, a Goddess decided to see the human world and summoned those giant gates, which began to appear in different places of the world. With the summon of the gates, people also discover a new source of energy. Later on, this resource helps develop science and becomes the reason for a huge interest of many adventuring guilds. The series focuses on Yutoria, who decides to invite a new friend to join one of the adventuring guilds. Minato, the friend who joins the guild hopes to hear a declaration of love from Yutoria, however, what he gets is a request to become the president of the guild and he cannot say 'no'. Will Minato manage to be a good president?

Shachibato! President, It's Time for Battle! is an anime that advertises the game with the same name. It is difficult to give any serious assessment of a series that overuses the idea of characters that go in another world, form a guild, guild members start to quests to earn money, and so on and so forth. And the problem here is not that it overuses cliché, the problem here is that the series refuses to even do the bare minimum required to at least be average. It just looks like that the only aim of this anime is to promote the game: it shows some unnecessary mechanics, as well as jokes that are hardly funny.

Characters are, however, not as bad as the storyline, but are still average at best. Minato, the series protagonist, is asked by his friend to be the president of the Hope Company and lead its adventurers. This is the last thing he wants to do, because he is only interested in the girl that invites him to join the company and become its president. Another reason for him not wanting to become the company's president is that he does not have a high level. And it would be absolutely normal, have this show decided to choose the romcom route, it would be a pretty okay romcom, if it were one. But what you have is a male protagonist, who is supposed to be the president, the character, who makes this series interesting and is the reason people watch the series, here, however, even supporting characters are more interesting than the male protagonist, the president Minato.

Overall, this anime is nothing but a cash grab. Though, I do wonder if this series will be of much help for the game, since it does a bad job thinking about the viewer. So why would that viewer want to play that game? There is, however, only one good thing about this series and that is animation, it is quite good, I must say. Would I recommend this show to anyone? Definitely not. This series fails to be even average, it is worse than average.