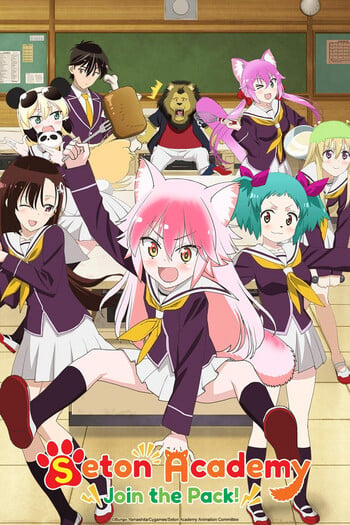 Majima Jin hates animals, and yet he finds himself at Seton Academy, a school full of animal students! Can he learn to get along with his classmates?

Those Who Strip with the Ones They Love

The Self-Styled Young Man and the Giant Wolf

The Legend of the Panda Girl

The Wild Habits of a Troubled Animal

I'll try to talk about anime related events only. I might do a separate manga review to include more events that happen further ahead in the series. This anime, so far I have liked it for the most part. I think the genre is Romantic omedy? If so, it's supposed to be funny. And it is, so it fits its genre pretty well. Story: The story primarily centers around the Cooking Club, and how they're trying to change the stereotype that animals can only befriend and connect with those of a similar species. Some of the episodes, like the ones introducing Meimei and Yukari among others, do this and showcase an obstacle or task they must overcome. Other times, it may be an upcoming event such as Field Day. The story is pretty simple. It is interesting to see the new characters and species that appear in a new episode, and I also like the random animal facts they throw in as well. It's a nice bonus.Animation: I sometimes find it tough to evaluate animation, because let's be honest, I'm a terrible artist, and the people who work on these are professionals. Who are I to critique? Anyways, it's definitely good. Character designs stay consistent, backgrounds are interesting, the color choices are great. Overall, not much to complain about here.Sound: As I've stated in other reviews, my laptop doesn't have working sound, so I can evaluate voice acting or the soundtrack. Characters: A good show needs to have good characters of course. There needs to be good chemistry or dialogue between your main characters. Meimei is great in this regard. Ranka is as well. Both always interact great with other characters, are easy to like, and fit the theme well. Hitomi seems a bit out of place however. She's almost just there to be there, to give Jin a human companion. That's about it. Yukari isn't too memorable, neither is Kurumi, but they're not horrible characters by anythings. Miyubi is hilarious and also easy to like.So that leaves us with Jin, who, to be quite honest, might be one of my least favorite protagonists ever. He's awful in every way. So, I guess the setup is he got beat up by bears when he was younger, and now because of that he hates all animals. Kind of a strange reason to hate all animals, but it's a reason I guess. More importantly, what makes him unlikable is he's rude, brash, ruins character dynamic, and has no good reason to be this way. Worst of all, he has shown no signs of that changing, and if he stays this way thoroughout the series, it wouldn't shock me. I'm not saying your protagonist has to be nice, charming, and the greatest person on the planet. But they need to have a valid reason to be who they are. Even Hajime Nagumo from Arifureta, one of the most panned series of last Summer, had a good reason to be stuck up and rude to everyone else. His classmates bullied him, and one tried to kill him. Jin doesn't have a good reason to be this way. He's severly lacking as a protagonist, but fortunately doesn't bring the show down with him.Overall: Well, that was a lot. I guess by averaging out my scores, it gets a 7.3 which seems about right. The story is good, the animation is definitely fluid and visually appealing, and for the most part the characters are passable as well. Jin brings down the score though, since he's the main progragonist of the series, and he's not a good one at that. This show is definitely challenging the idea I previous had, that all good shows have a good protagonist. I'll be interested to see how the rest of the series goes, and whether or not these scores will improve or decline. 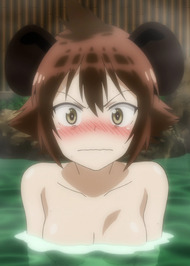 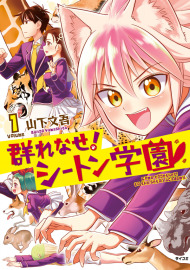