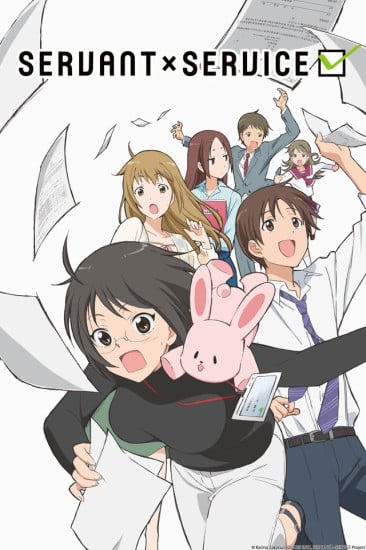 *So I should mention that SxS was the first anime that I watched after SAO II and I deliberately picked this anime because I wanted a fun comedy anime after that heartbreaking end of SAO II. And I must say, SxS did its job well, I laughed my ass of with this anime. It balanced on that point of becoming too silly but that is the point where the best comedy comes from in my opinion. But to me, the comedy was hilarious. The returning skits and gags got me every time and not every comedy anime can do that. Others sometimes get really repetitive with their gags and start to annoy me but here in SxS I kept on laughing with it. And there were also some details that made me laugh, like how Lucy’s hear antenne would move according to her mood. Not everyone will appreciate this kind of comedy but I found it to be absolutely hilarious.

*And another thing that played into this comedy was the intro of the anime. I enjoyed that intro and it was also quit unique in terms of the animation. I had never seen this type of animation in an anime before and certainly not in the intro of set anime. The combination of 2D, 3D and real life footage was completely unique as far of the anime’s that I have seen. And pair that intro sequence with one of the most catchy opening songs in the history of anime’s and it made one hel of an intro to what almost all the times would be a hilarious episode.

*And my final positive point was the unexpected romance in SxS. When I started SxS I wasn’t expecting to see any romance in this anime, I thought that this was going to be an all out comedy anime. But quite soon in the anime multiple romance plots start to unravel so that was an unexpected but enjoyable surprise.

*But there was also a problem with these romantical plot lines being that none of the 3 romantic storylines is fully concluded at the end of the anime. So that raises the question if it was really necessary to put these romantic storylines into this anime since they also pull a lot of time away from the main storyline of Lucy trying to find the guy whose responsible for her name. In my flemish dialect there’s a nice saying that describes this issue being: “Eieren of Jong?”. Literally translated it mean “Eggs or Chicks?” and it describes a situation where there’s no real direction where something is going towards and it stays in the middle. And in SxS we got low attention for the main storyline and non concluded romances so also SxS stayed in the middle.

*My next point of “complaint” was the animation of the anime itself. The animation in SxS is average, definitely under the standards that we’re used to from A-1 Pictures. But however in this kind of simple comedy anime’s it sort off works. Simple anime’s don’t need very complex animation since it will mostly rely on the jokes to make its case. In that sense, SxS looks a lot like the Working!! series. Also there the animation isn’t of the highest quality that we can get from A-1 but also there it works.

*And my final negative point is that if you’re not a fan of the comedy in this anime, and I can definitely see people not liking this type of comedy, than you will be bored really fast. This is a comedy-slice-of-life anime and as it usually goes with this type of anime, it’s not for everybody. If you like gagfull, repetitive comedy than you’ll like this anime. If you don’t and you also don’t like the realism of slice-of-life, than you should stay away from SxS.

So as a conclusion, despite the very basic concept and character of this anime, SxS is one of the funniest anime that I’ve seen so far this year. But as I mentioned it’s not an anime for everybody. And that’s why I’m going to rate Servant x Service at 3,5 stars. It was a good, simpel comedy anime that was refreshing after SAO II, but it’s not an anime that’s a must-watch for anime viewers.

too lengthy for me. everything was dragged out till the very end but not bad still cute

I think its one of my favert anime shows I ever watched thay need to make more shows with theas charters.

i enjoyed mostly everything. i wish that lucy did not get her job for revenge and that the guy similar to the guy who liked lucy was not weak. also i wish they the people who where poor was not.

also i wish the did not leave it at a kliff hanger i hopr they will het a 2nd season to rap it up also     i still think its is better than "working!!!"

i did enjoy that the boy fell for the girl because usally the girl fall for the boy so i was very happy at those times, also how he would lose his cool around her sometimes.

I RECOMMEND TO OTHER ANIME WATCHERS!!!

Servant X Service was very entertaining to watch. I laughed a lot every single episode and enjoyed the plot, the characters and the vibe. This is a brief spoiler-free review.

The tags “comedy”, “slice of life”, and “work life” are right on point. This anime follows a group of individuals who have recently been employed as government workers. Every one of them has a different personality, background and view of life. The story does not have any depth, it is purely to give the audience a good laugh. The anime is not only funny but it is somewhat relatable for anyone that is working in the “real world”. There is no real plot to the story other than Lucy wanting to know what employee approved her name when her parents registered her with the government and Lucy being the object of a co-worker’s affection/love interest.

The music was not a strong point but considering the nature of the anime, I don’t think this really mattered.  The voices for the characters were nice and fitting to their personalities.

I loved every single character in this anime! My favorites being the carefree Yutaka Hasebe and the unique self-proclaimed otaku Megumi Chihaya. I had a lot of fun watching these two do their own thing (not to say the other employees were not fun to watch too). As I stated before, there is not much depth in the story or its characters but what the audience gets to see is sufficient to help the characters become very likeable and relatable to some extent.

I highly recommend this anime to anyone wanting to watch a fun, short anime to relax and have a good laugh. Keep in mind there is not a real plot to it but the characters are very fun to watch J