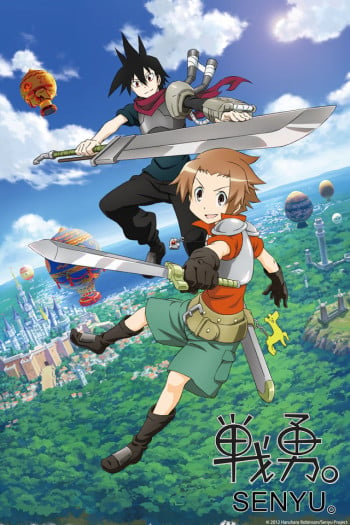 I honestly couldn't believe that something as short as this would make me laugh so hard.

And short it is indeed cause every episode clocks at 5 mins or so.5 mins of constant slapstick satirical comedy attack.I don't know how they pulled it off but this little gem is more of a parody/comedy than most full series are.But oddly not as praised.

This show follows one of the descendants,Alba,and his knight,Ross and of course many funny characters they meet along the way.Overall the story is somewhat original and I enjoyed the humor very much.

The art work is very well drawn,although simple but it delivers what the anime wants to convey in a brilliant manner.

There isn't much i can say about this anime,it's abso-fucking-lutely amazing and if you're tired of all the shouting matches of the likes of Naruto,Fairy Tail etc you can spend an hour and have a great laugh.I definitely recommend you watch it.

Review written while listening to this BAD WOLVES "Learn To Live"

So I did this as an alternate to the daily anime marathon event (which would of meant I watched another borderline ecchi anime which if you saw my rescue me! review probably wouldn't be for the best. So in this we have a world set in a RPG setting, fighting monsters and things in a RPG setting. A cute and fluffy anime to take your mind off many other things...

5 Minute episodes are never the best with story and normally end up going with short comedy elements to make th audience laugh in areas, which I think thisfits perfectly with this idea of short comedy.

The animation I would say is pretty basic but this of a high quality for what it is, and once again I have run out of things to say about the animation...I mean that giraffe monster thing in the 1st episode was basic yet really cute, in a weird way. Alba's mother as well, now that design was pure genius XD

Voice acting was alright,nothing too outstanding but nothing that was bad, honestly there wasn't any voices I felt that stood out. The ending/opening theme (no idea what to call it) was fitting to the series, short and sweet.

Majority of characters were quite simple, like their personalities but for a short episode anime any development of the characters were pretty limited. No characters really stood out for me personally but there wasn't any characters that you could really hate...except maybe that guy in episode 4.

Overall this was enjoyable but in the end it wasn't anything amazing, but cute short episode anime.

Senyuu is a hilarious anime filled with original, interesting characters and and lines that will make you die laughing. Things that would normally be serious are given a funny twist that will make your face hurt from smiling so much! It did get on my nerves a bit that each episode was so short...

I have no words to describe this anime. these characters are just so amazingly funny that you find yourself unable to stop laughing at this anime.

this anime goes as far as to make the plot itself as a joke as backstory behind it is just so ridiculously overused they actually save themselves it by openly poking fun at it. also with the intelligence our "king" displays in the first episode I'm wondering how he held things together.

I'm not an expert with animation and sound effect review but as for animation, the actual animation is only slightly less detailed than the cover image.

this anime has made these characters a very fun group to watch "struggle" to defeat the demon king. as details would spoil both seasons, i will just say that there is only one character who shows even a little bit of maturity.

this has been an extremely enjoyable anime for me and i do very much hope we get a third season of senyuu.

It started out with kind of a Plastic Nee-san feel with things being really random and funny, but then in the second half of the show it suddenly tried to have a plot.  The characters kind of got stuck in place for the second half and not much of anything happened.  If they had stuck to a more episodic random format it would have definitely been a must watch little mini-series.

If you like this 5 minute comedy format then really you should just go watch Plastic Nee-san, it's freaking hilarious.