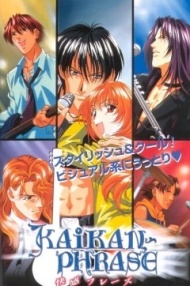 Santa, the drummer of CLIMB, has just left the band after finding his girlfriend in the arms of a friend. Along with Yuki, the lead guitarist, they start their own band called "Lucifer, The Fallen Angel," and set out to find new band-mates. Recruitment is not easy, however, and on a search to find a vocalist the duo runs across a promising bass guitarist and a local hotel's piano player and singer who has been wowing patrons daily. With little time to spare, can the two round up the talent they desire, or will Sakuya let his anti-social personality hold him, and his newfound band, back?

StoryFangirls, hold on to your panties as five beautiful bishounen boys are ready to take to the stage to serenade their adoring worshippers! At least, that is what I prepared for as I launched into the latest good-looking hunk-fest from my hard drive. Expecting the usual issue with many shows aimed at females - that the story holds about as much depth as a teaspoon - I found something inexplicable that kept me coming back for more. Starting with the breakup of a band, Kaikan Phrase chronicles the journey of the newly formed Lucifer (or Λucifer for those paying attention to the band posters and terrible subtitles) and the struggles the members face to not only debut, but also climb to the top of the charts. Immediately, there is a sniff of Beck, as old rivalries rear their ugly heads to impede the success of the newly formed five. Toss in the politics of a multi-national production company, then add a dash of over-zealous coincidences, and the inevitable struggle through adversity becomes extremely predictable. About half way through the series, the exaggerated coincidences continue as Sakuya bumps into a high school girl called Aine, a feckless bint with a penchant for walking in front of moving vehicles. Romance blossoms between the two, and this is probably what sets the fan girls loins stirring as they imagine themselves wrapped in the arms of the dashing singer. The lacklustre relationship essentially consists of Aine being a whiny brat, and her beloved picking up the mess behind her. Call me cold hearted, but the slightly more adult edge of the show was ruined by a blaze attempt at love. For a 44 episode series, there isn’t really a lot that happens. Sources tell me that the manga is very different from the anime, and most fans of Kaikan seem to prefer the written word. Personally speaking, as someone who is completely fresh faced to the title, I found the drama a little bland and the suggested romance a complete disappointment. However, the writers’ love of cliff-hangers had me coming back for more, even though there was nothing particularly gripping happening in the story-line.AnimationOne issue I have with music based anime is the awkwardness of the main vocalists. It’s difficult to explain, but the lips never seem to convey the realism or emotion of a singer. Kaikan cunningly avoids this trap by frequently covering Sakuya’s mouth with the microphone as he belts out Lucifer’s latest track. Unfortunately, this genius move is shadowed by the rest of the band bobbing around with moves that can only be described as “special”, sporting the same elated look my dog gets as he spots a stinky pile of cow poo to roll in. The rest of the visuals are fine, but they become dull as scenes are routinely recycled – something emphasised by the fact each character must reek to high heaven from the severe lack of costume change in the first half of the show. Also worth noting is a certain fight scene – not wishing to spoil the action, I will just say I have not laughed so hard for a while as the terrible choreography and dreadful animation detracted from a poignant moment.SoundFor a band named Lucifer, death metal or industrial rock are the first things that spring to mind, not the lukewarm J-pop that spews forth. Maybe Cherub or Wet Blanket would have been a more appropriate choice. Showcasing Sakuya’s vocal talents, the same three or four melancholy emo tracks are repeated over, and over, and over, and.... you get the picture. A little more variety would have been welcome, especially with the solo hits that were talked about and never actually played in the series. The voice acting is surprisingly good, except for the horrific Engrish. Each character’s seiyuu matches their personality well, and has enough of a diverse vocal range to match the melodic charm of the band.CharactersHaving watched a significant number of shounen-ai series, I have come to recognise the over-used personalities that seemingly find their way into each title. From the cold and aloof, to the unquestionably camp, the boys from Lucifer come straight from bishounen-101. The sexy, blue eyed Sakuya may be mysterious, but his stubborn indifference to the rest of the band becomes boring very quickly. Sadly, it feels as if his “lead singer” status makes him the show's central focus, and little time is left for development of the rest of the group. Atsuro’s struggle with his parents disliking his life choices is far too similar to that of Yuki, and the sappy resolution was doubly bad because of this. Both boys could have been showcased to a higher degree and the story made much more successful if more time was spent telling the story of the rock bad-boys. Adding the feminine touch, Aine feels like the token girl in the group dynamic. A sniff of romance remains just that, and the young schoolgirl is destined to remain forever needy for the single kiss and occasional bear-hugs from Sakuya.OverallAlthough I wanted to give Kaikan a much lower score overall, I feel there is something about it that deserves more than an amateur review bashing. Although I am unable to put my finger on it, the storyline had me coming back for more, and the terrible animation during the musical scenes put a smirk on my face. Even the music starts to pervade into the play/repeat part of your brain. Definitely a show with eye-candy for girly girls (which I am not), guys will probably be turned off by the lack of action or real drama. Bottom line: Don’t expect the musical focus of Beck or the dramatic flair of Nana, and Kaikan Phrase won’t disappoint (too much). 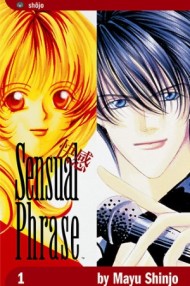