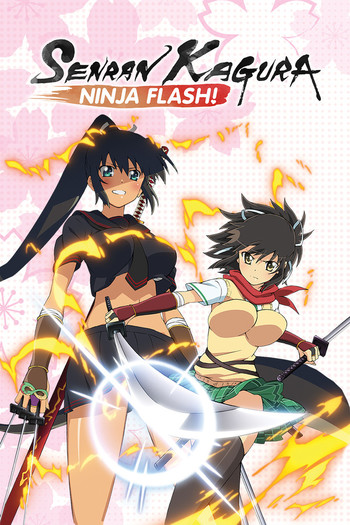 Legend of the Mystical Ninja

In the video game world of Goemon, the evil Makuamuuge has concocted a nefarious plan: to take over the human world! To facilitate the takeover he sends the dashing Harakiri Seppukumaru; with Seppukumaru's help, a portal can be created that will allow Makuamuuge to complete his plans. However, hope exists for mankind: the ninja Goemon, who fell into young Tsukasa's life through a computer monitor! Along with the machine-savvy Monoshiri and a giant robot, Goemon will battle Seppukumaru and his evil monsters and save the human world from destruction!

WNA researchers Burton, Berecca, and Ron continue their tireless efforts to develop “Ninja-Gum”; a mysterious substance that activates latent Ninja DNA in people descended from those legendary mercenaries from days gone by. Today, all their hard work finally pays off. It is here, on their 2,503rd attempt that they finally succeed in producing Ninja-Gum! Burton and Berecca can barely contain their excitement, and waste no time in trying the gum for themselves! But then...

Hiroto longs to build a secret base near his house, and in his house's storeroom he meets a ninja and "Nintuber" named Tonkachi. Tonkachi, who knows about the existence of the "Ninja Box," forces Tonkachi to go to the "Village of Tatemakuri," where they meet a talking dog named Tatezou.