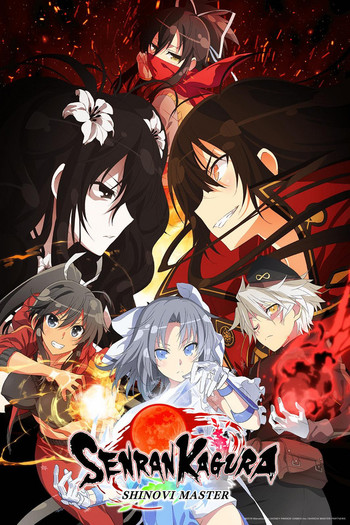 (( Watching requires you to have at least some plot knowledge of the Shinovi versus,  Estival Versus games))
Senran Kagura: Shinovi Master is an anime based on the Senran Kagura video game franchise. It's mostly aimed toward fans of the original videogame series. It's not a direct sequel to the original anime adaptation and how canon it is with the video game series -if at all- is debatable.  Preferably both the ''original'' series canon and the ''new'' series canon. Again, this series requires you to be at least to some extent familiar with both timelines in the video game series to be fully enjoyed. Recommend Watching this only after having played or seen playthroughs of at least Shinovi versus and to a lesser extent Estival Versus. However taking even this, this anime is mediocre for the most part.

The story starts out with all groups of playable character from the video game series out and about doing their own thing. Including three sets of characters that weren't introduced in the original anime adaptation of Senran Kagura. ( Shinovi versus and Estival Versus groups of characters ) quickly trouble begins as they are attacked by mysterious yet familiar to the game characters. The context of this is only revealed later in the series. The series quickly moves along with action scene after action scene and some more comedic erotic content here and there. Expect lot's of bare chested females with ample chests and of course the token ''disturbingly young looking'' character.

This show isn't very pretty or especially well animated but the animation isn't horrible either. It's cutting costs in a few notable moments but the fights in this aren't consistently poorly animated. Still both the fights and outside this fights a lot of the time the animation is just noticably budget. The way the character designs were adapted to this anime is noticably different from the original anime and generally looks worse as the characters often look wooden to an extent and too flat which considering their chest sizes is an accomplishment. The sound design is very average for the most part as well as the songs and the voice acting isn't terrible but has consistency issues due to just unnatural sounding dialogues.

Characters
With so many characters only having been fleshed out in the video games prior to this the whole experience feels messy and unnessarily padded out with such a large cast. While for a fan of this series this means that most peoples favourites will show up in the end it leaves little in terms of character establishing moments and you can't really get the characters in this anime alone. Asuka as the main focus point of the series has a script that just doesn't feel well written and that comes accross in the acting as Asuka doesn't come off as believable. Yumi as the second or first main character depending on the episode comes off a little better but the writing feels just as basic and memories are all too conveniently tied in with the plot, while this could work the scripts for this entire series just feel like they needed a bit more work.

Overall, This anime is an example of something that works in game format far better than in actual animated form. This isn't really required watching for anyone. It's largely forgetable. The story is mostly rushed through as one battle scene to the next develops. Fanservice galore for the fans but the animation is mostly very basic and often cheap looking. The whole production feels rushed and the scripting feels incomplete. Asuka comes off as unbelievable and Yumi is a character that doesn't really feel truly deserving of the amount of spotlight that she gets due to how simplistic the plot surrounding her character is, being mostly based on memories and what happened in her character development in Shinovi Versus.

If you're a fan of the series you can watch it and probably enjoy a scene here and there but overall the silly OVA things for the games is probably more fun the the common fan than the ongoing plot in this anime. It's not the worst thing ever despite Asuka's unrewarding scenes and the build up surrounding her character but it's probably so unremarkable and at the same timeconfusing to anyone not familiar with the games as characters are thrown at you left and right.