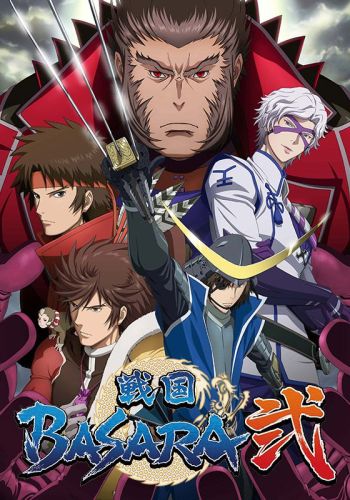 On to Season 2! As I said in my Review for Season 1 I'm a huge fan of the original Sengoku Basara game story so excuse my ranting.

Ok Season 2....the first thing I can clearly say is that this one is a great improvement on Season 1. Don't get me wrong I still don't like the story they chose but this one isn't actually that bad. Despite the fact that in the original story Nobunaga was actually alive when hideyoshi was around and that the two were kinda big rivals. So yeah this Season's baddy badguy is Toyotomi Hideyoshi and his advisor and strategist Takenaka Hanbei. Right from the start you can see that the art and animation style is greatly improved over the 1st season. The music still kicks ass. So we start off where we left of in Season 1...the fight of Kenshin & Shingen and Yukimura & Masamune. So yeah they fight for a while and then Hideyoshi finally shows up....and this is the 1st time somebody actually succesfully interrupted a Battle with his own army....not even kidding...nobody in the 1st season had the idea to, while 2 armies were fighting, take them both out with a bigger one....that just shows how "advanced" Toyotomis strategies were.....  Well anyway the whole story is actually based around certain events. Hideyoshi showing up and claiming many parts of the country, Kojuro getting kidnapped and held hostage for most of the season, Yukimura is doubting whether or not what he does is right and well...OTHER CHARACTERS HAVE SCREENTIME. Yeah you read that right....it's not only based around Masamune & Yukimura! Improvement! The talks you see between Hanbei & Kojuro are interesting too. I mean the whole story is (in my opinion) kinda crap compard to the original one but...it suprisingly works and they go trough with it. It's sad to see that they tried to squeeze Mitsunari and Ieyasu in the last few episodes just because they play a main roll in the movie....oh and don't forget that ieyasu died in season 1.....ANIME BULLSHIT! :D So yeah we then see the final assault from toyotomi an all-out-war. Mitsunari is send to Echigo and Ieyasu to Satsuma...that means Mitsunari vs Kenshin and Ieyasu/Tadakatsu vs Yoshihiro/Musashi don't have high hopes for those fights though because they...have like 2 min. of screentime...that's it. Oh and troughout the season Matsunaga does some stuff too and they finally managed to actually show what he's capable of. MY favorite by far was Motochika vs Hideyoshi...this fight is just...so goddamn awesome that even the english dub got it perfect. Well I guess you can't go wrong with Motochikas english VA but still. It shows how much stronger Hideyoshi really is but it also shows that Motochika isn't called the Demon of the western sea for nothing.

The Ending...I don't even wanna talk about it.....all battles in and up to the last episode were awesome....but the last fight...Masamune vs Hideyoshi....don't get me wrong here I don't hate the fact that it's Masamune who kills him....BUT it's rather the way this fight turns out. "You see" it all starts with Hideyoshi beating the living Mancrabs out of Masamune and finally smashing him into Odawara Castle so he's buried with the building....and then they pull....the worst.....BULLSHIT CARD....I have ever seen...for an unexplained reason masamune can just stand there again and yell "NO LIMIT!" and power up......DAFUQ?! This is never explained....we never know why or how he did it he just stands up again and two hits Hideyoshi into his grave....

All in all....I have to say it is really better than Season 1 but still nit all that great, I mean yeah most of the fights are awesome and the story conversations are actually really interesting this time. But the ending simply ruined it for me. The new animations and the different perspectives from eacht character really give it a nice touch. So it's a 8/10

After the demise of Nobunaga a new foe arrives on the scene and he's big, he's bad and he;s an ape... oh wait, I mean Toyotomi. He makes his presence known from the very first episode. Staying true to most of the story set back in history, Sengoku Basara Ni still doesn't disappoint. This time around though it's a bit more serious as the story revolves around old bonds between friends that have died, and of course some strange alliances. We'll get to that later thought, here it is your moment of Zen...

The story actually seemed a tad bit different this time around, with no real selling point. It seemed kind of dull at the moment, but then picks up after the first 5 episodes. It was surprising to see that Keiji got a nice leading role this time around to tell the tale of an old friend whom he have to face sometime sooner or later. Of course though something did get to me towards the end of this season that really bugged me... didn't Tokugawa die or am I bugging out. I'll have to re-watch season one to be sure. Anyway, the bonds that made season one were also noticeably gone this time around make it seem at first that it was every man for himself, but then new alliances form and well, things just seemed to make sense if you're like me and pay attention to detail. There at least, this time around was a very nice original spin to things, but there seemed to be something missing, just can't put my finger on it.

The animation was way better, to me anyway, in this season than in the first. You got the sense of more emotion from the battles this time around than in season one. Better lighting, and structure, nothing felt rushed or overdone.

Once again a killer soundtrack with great ambiance and deeper tones. I was actually happy that they didn't go with the "lets just recycle" theory that a ton of series have been doing for a while now.

Ah, yes, the selling point to this series, the characters. Following up nicely after season one, season two did not disappoint, but rather upped the ante and did an awesome job of bringing characters to life, while giving them more emotion and drive as well as a purpose. Each character with their own agenda. I won't hit you with any spoilers but you'll understand what I mean once you get to the midway point of season two.

Overall Sengoku Basara Ni gets and 8.5/10. A 9/10 still felt too strong to me only because I guess I was looking for something more in terms of story. Oh well, beggars can't be choosers lol. Ooh and there's a movie scheduled to come out this year, which should be surprisingly good.