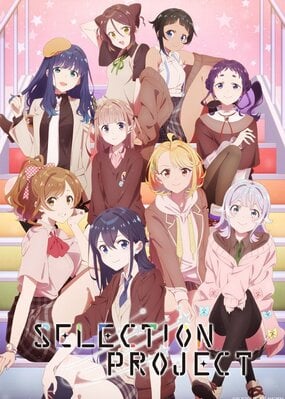 For girls who want to become the next big idol, there's one major audition show that pushes them to the top. Who will fulfill their lifelong dream?

Selection Project is a well produced creatively bankrupt idol drama.  The mishandled premiseThe first episode interestingly makes the audience believe this show will have a more grounded take on the idol aspect,  compared to some other shows, as in actual idols that have contracts, tv appearances, photo shoots, have to care about their popularity etc.  And then that quickly gets discarded. The biggest issue with the show is exactly how badly they handled the premise. The scarce competitions they make the idols go through are clearly not well thought out for a myriad of logistical reasons. The couple of photo shoots seem put in there at random to just make it seem like girls have a fully packed schedule. Most of the “training” we see the girls do is.. just running. I swear, 90% of the training is stamina building… I guess everyone already knows how to dance and sing well enough. It comes to a point where the viewer comes to realize the entire competition aspect was there just to simply make the 9 main characters meet each other and have an excuse to have them live together. That’s it. Nothing smart is ever done with it. The show barely even acknowledges the (fictional) tv show's own existence. What do I mean by that? For example in one episode all of the girls are in various train stations… and after being on the supposedly biggest tv programs in the country literally not a single passerbys gives them a second look, nor are they ever stopped by any fans. In fact, the fan presence is just affirmed by generic “online votes”. With all that said about how the premise doesn’t matter… What is the show actually about? Drama. Straight, pure and unabashed drama between the characters. If that’s appealing in any way depends on personal taste, but know that’s the real focus. Personally it got way too excessive in the second half of the show, some episodes becoming a real chore to finish. Not only they focus way too much on the issues that get brought up, but none of them are interesting as well. VisualsTurning a bit more positive, one cannot say the show is not well made. The art style is constantly pleasing, the lighting greatly enhances the backgrounds and the animations, while never particularly elaborate, don’t experience noticeable quality drops. The colors are also particularly warm have some depth, the show thankfufully avoids the common mistake of making everything feel flat. The song performances are done in CGI, as common practise in many Idol shows, and the characters are perfectly modelled and animated, with energetic camera shots that really give the songs a music video quality. The direction is well handled, with no noticeable defects, but also very generic and forgettable, you won’t find a single interesting shot with particular composition or perspective. Unfortunately, they also don’t play enough with the tv show aspect, which is a huge miss. If they made the scenes that were canonically shown on the tv program actually shown to us from the camera perspective that would have helped the show have a unique visual style.  Last but certainly not least I have to mention the absolutely stunning character designs, every single character looks great and is even given a bunch of different interesting outfits to match their personality. Even some of the one-off characters show more care in design than some main characters in other shows. CharactersSpeaking of characters, how are our protagonists? They start off very well with interesting personalities and in the first third of the show everyone slowly gets some focus and development in tandem with them learning about each other. But then unfortunately the scriptwriters made a dumb decision. You see, in one of the fictional tv program competitions they divided the 9 idols into 3 groups, and at first everything was fine, with each group's members having to develop teamwork and decide how to handle different creative aspects of their own performances (though the show never gets into any details, everything is surface level stuff like “we are good enough!!” “nooo we should practice more” arguments) But then for.. no real reasons the groups stuck. In the next competitions the girls keep getting put into those groups or simply just handle stuff as a sub-unit. Even in things that would clearly not require them. That wouldn’t be the worst thing in the world if it wasn’t for the fact that the show really wants us to believe in the connection they ALL build up together… even if we rarely see them do anything together. This group sectioning also had the downside of stopping the natural character development as different girls interacted.  All in all, for an idol show they are fine, but they had the potential to be much better. But what about the songs?It may seem weird to just briefly mention the songs at the end in an idol show review but there really isn’t much to say, the songs are fine. If you like generic idol songs like me you’ll enjoy them enough but they are mostly forgettable. The only real standout is episode 1’s “Only one yell”, something the show clearly knows since they play it every time they can. ConclusionIf you already like idol shows and don’t mind a lot of drama, give this one a shot. It’s nothing amazing but you’ll probably be satisfied enough. For everyone else, stay clear.

I never been big on idol anime but decided to give this one a try... needless to say it is a experience that I will forget :). The show is pretty much about rip off ____ Got Talent and all that. (SPOILER WARNING AHEAD) For me it started out fine, I was enjoying myself some what... but then they just never had anyone voted off and pulled a FRIENDSHIP IS POWER cliché. I never hated this cliché so much until this show, even after watching my little pony AND not to mention ALL of Fairy Tail. Then after they had no one voted off they disqualified everyone and made it a point too say they are trying to grow as a idol group (without any help from big company's like the one that runs the competition). Then about a episode or two of working on their own they just get to GO BACK AND FINISH?!?! It kinda seemed to defeat the point of them trying on their own :( Now for the other point, I have no problem with characters idolizing dead idols... BUT it kinda gets weird near the end, but to explain why I first need to explain the 2 main characters back story. Our 1st main character is Suzuna who had a bad heart condition when she was young, she would watch this one idol Akari Amazawa (she was quite a fan). One day she got a heart from a organ donor, and got to leave the hospital.The 2nd main character is Rena, who is Akari Amazawa's younger sister trying to follow in the foot steps of her dead sister. Her sister became a organ donor. Now that you know that it will be easy to put the 2 together... Suzuna's heart belongs to her childhood idol. She figured this out along with RenaAt some point near the end of the series Suzuna passes out do to overworking herself, so she gets taken to the hospital and ain't waking up. Rena is also there cause she is concerned for her friend. After a bit the show shows the dream Suzuna is having, where she is being asked stuff by Akari. Also during this conversation our main character looks like their younger self after the heart transplant. Near the end of the conversation Akari says she will always be with out main character well having her hands over the scar from the transplant. If that ain't weird enough she wakes up and says she talked to Akari and that she said she would always be with her right in front of the relative of Akari who is already established to be quite sensitive about her sister due to her sister not spending much time with her after her success. On another note I think Rena might see too much of her sister in Suzuna after figuring out her deceased older sister's heart is in her. Even to the point that right before their last performance she looks at her and see's (and also hears) her sisters voice saying what Suzuna is saying...