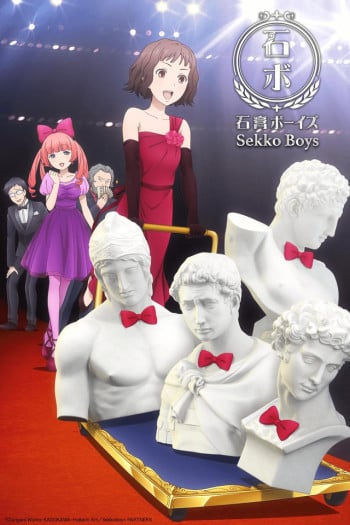 “Sekkou Boys” is a four member boy band whose members are all idols, literally: the group leader Saint Giorgio, the original celebrity Medici, the multitalented Hermes and the lover Mars. However, the only catch is that they are all stone busts! The anime depicts their story of making it as a boy band with the support of their fresh-faced manager, Miki Ishimoto, who has only recently graduated from college.

A Visceral Allegory of Seven Years of My Artistic Life

Where Do We Come From? What Are We? Where Are We Going?

Allegory of Music and Prudence

The Forge of Vulcan

The Return of the Prodigal Son

Now, I know what you're thinking. "What? An Idol anime with statues?? Nani desu ka?" And yes, it's an idol anime with statues, more procisely busts, as the idols. But what about the male fanservice that is supposed to accompany male idol anime? That is sadly missing, but fear not, there is comedy instead. I can hear the BL fangirls weeping somewhere.  Story: A girl goes to art school and all they ever do is paint portraits of various statues. It's enough to make her quit art school, remove the colored strands from her hair, and start a career in show business as... a manager? Yeah, that one was like "but why?" when I first watched it. Her charges are a new idol group made of... statues, much to her dismay. And these aren't just ordinary statues, these statues can talk! (and apparently sing) The rest of the anime is the new manager dealing with temper tantrums, possible scandals, and trying to get the idols to be famous.  Animation: The animation is very nice, despite the lack of male fanservice. Of course, the idols themselves are pretty much stationary the entire anime, but the human cast is animated quite well. I would have liked the lines on the statues to be a bit more defined, but then I remembered what actual statues look like, and the animation seems pretty on point.  Sound: You know, for an anime about idols there wasn't a lot of music. The end song is actuall the song the idols come up with towards the end of the anime (spoiler alert, but not really), which is a rip off of a certain other male idol anime that will not be named *coughPrince-samacough* And the end song really isn't that good... Characters: How the hell do you characterize a statue? No, really? Oh, you give it the traits of whomever the statue is supposed to be... uh-huh. I just don't see St. George and his dragon slaying becoming an idol, but ok. And Mars? Why not Apollo, you know, the god of music? Oh, nevermind. For statues, the characterization is decent, although they really only get 1 or 2 traits.  Overall: Is it worth it? The comedy is decent, the rest is rather "meh"

What I Liked: Animation is decent and clean, with good character designs and nice contrast between the Rockies and the other characters. The Rockies all had distinct and funny personalities. The Enka singer. The fact that some of the jokes were allusions to the Rockies' mythologies. The Ending Theme, which was nicely incorporated into the plot. What I Didn't: Much of the content was rather forgettable, running on a few scant running gags. Suffers from Penultimate Episode Mood Whiplash. Final Verdict: Totally hilarious from start to finish, Sekkou Boys takes the concept of literal idols making it big and runs with it - resulting in an enjoyable and silly if not somewhat sparse workplace comedy. Come for the stone idols, stay for the catchy Ending Theme and amusing characters.

Let's make it short. This anime is one of the most original works out there, the characters and animation are just fine and songs from Sekkou Boys are totally awesome. The jokes are hilarious, however, some of them have added value in japanese, so this show is much better for people, who can speak japanese. The sadboy degenerates will enjoy this piece of art as well even though they know nothing about ancient Rome. All in all, this is a great anime with lots of originality! I hope my short review helps.