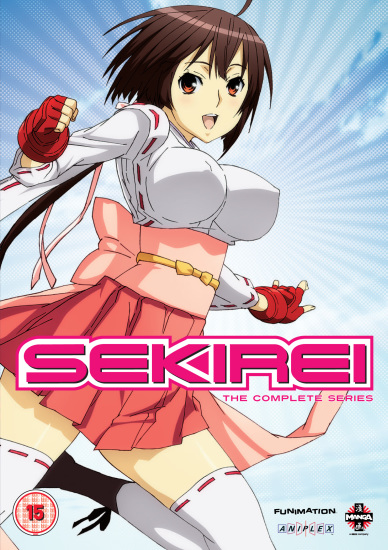 If I had to choose a moniker for Sekirei, it would probably be, "The Little Anime that Couldn't". It offers ecchi fan-service without being racy, peddles action while failing to be engaging, and sports an interesting setup that the show never puts to effective use. While it's possible to read the series as making fun of itself, the harem genre, and tournament-focused shounen shows, a second look reveals that the show means everything it says--much to my dismay.

A quick summary of the series reads like Pokemon, but with tits. The first installment follows the hapless protagonist as he bumbles and sweet talks his way into acquiring of an increasingly powerful and scantily-clad team of humanoid aliens called Sekirei in preparation for a tournament sometime in the near future (read: second season). Thankfully, the parade of buxom woman in various states of undress meshes well with the show's simplistic focus on escalating confrontations. When two Sekirei meet for the first time, they fight. When Minato encounters new potential teammate, there's a fight. When MBI (the evil corporation behind the whole thing) seals off Neo Tokyo, the gang finds an excuse to fight. These high-energy smackdowns, which increase in frequency, participants, and outrageous displays of power as the story progresses, take a good deal of the pressure off the flagging narrative.

The show does demonstrate on occasion that there might be a decent yarn hiding behind all the cheesecake, but then refuses to follow up on any of these more interesting tidbits. For example, the first episode introduces the Sekireis' extra-terrestrial origins, but the subject gets dropped once MBI enters the picture. The dealings between Ashikabis (this world's trainers) also receive cursory treatment due to the series' singular focus on Minato, squandering an opportunity to provide him some character depth by comparison; and glossing over subplots that could have held the viewers' interest between battles. In the Kuu-chan mini-arc, the presence of another girl-wrangler and his cohort add tension and conflict to what would have been a boring meet-and-greet. But where the anime could have used the greedy antagonist to draw out the hero's underlying character traits, the remainder of the series chooses to leave this antagonist as a shadowy figure.

Sekirei's visuals sport modern coloring and finishing techniques, but lack the consistency of more polished anime. For every excellent water, fire, or lightning effect associated with the fighters' powers, there's a scene where the animation turns blocky or the characters look odd. Additionally, combat sequences cut a lot of corners; the chase scenes or jumping receive the lion's share of screen time that should have gone to the use of the Sekireis' impressive powers or dramatic hand-to-hand fighting. The show also hamstrings its own dramatic buildups by dropping into an unattractive deformed style during important interpersonal moments in a weak attempt to add levity where none is needed.

Additionally, the artists spent their limited imaginations early in the design process, leading to a plethora of derivative cuties. The lead's harem consists of four over-developed beauties in each of the four normal hair colors (blonde, brunette, redhead, raven-haired) and an adorable loli-girl who barely talks. While one character's interesting kimono and another's attractive black dress certainly provide some good eye-candy, two of Minato's girlies basically wear bedsheets, and a third wears an equally-unimaginative purple frock. The remaining cast coughs up such original creations as an outfit cribbed from Kill Bill, a guy dressed up like Neo from The Matrix Reloaded, and a set of twins in matching two-piece zippered cat suits (use the non-furry definition of cat-suit). Since the characters' costumes don't reflect their powers, each design merely allows the viewer to tell Sekirei apart at a glance and nothing more.

Starting with the bland OP, the series' soundtrack does not disappoint, but also never surprises. Most of the incidental music follows in the grand synth tradition of middling anime, sounding familiar and hitting all of the "right" notes at the expected times. Accompanying an unapologetic fan-service slide show, the bubbly ED ends each episode on a sonic high note--assuming listeners ignore the coyly submissive lyrics ("The truth is I want you to hold only me / I'm feeling turned on / Is it ok to show signs?"). Sadly, the voice acting doesn't deviate from the standard set by the score. None of the characters miss their cues or offend the ears, but the readings add no nuance to the broadly drawn character stereotypes. The only memorable performance comes from Seki Toshihiko as the MBI Chairman; his over the top mannerisms and showman's shouts add much needed camp, but receive tragically little time in the limelight. Be warned, this series also includes a mewling youngster in the form of Kuu-chan. The little girl's cooing would have rapidly gotten annoying save for the fact that her seiyuu makes some entertaining non-speaking sounds.

Sekirei combines a stereotypical cast with pathetic characterization to fall flat on its face where it could have shined. Given the show's ecchi pedigree, a hollow male lead comes as no surprise, but where other shows provide an interesting harem to make up for a lackluster main protagonist, this series coughs up a laughably generic group for Minato. As the female lead, Musubi's naivete brings in a few good chuckles as she wrestles with modesty, but her eagerness to please and penchant for violence quickly grow stale when she does not develop at all during the first season. The rest of his Sekirei come straight out of central casting: Tsukiumi fell of the truck on the way from the tsundere factory, Kusano follows the textbook definition of imouto to a "T", and Kazehana presents like Shakugan no Shana's Margery Daw with all of the interesting parts removed (but all of her lady-parts intact). Furthermore, the series substitutes mystery in the place of complexity at every opportunity, purposefully obscuring characters' histories so that they can act in unpredictable ways. Luckily, the low episode count both provides a convenient excuse and mitigates the characters' lack of development and unoriginality.

Far from being painfully average, Sekirei entertains so long as it remains on the screen, but doesn't rise above the low bar it sets for itself. Watching the show for the first time, the viewer can applaud himself on recognizing moe archetypes and marvel at the nifty super powers on display, but the unoriginal premise and middling execution means the show hardly warrants a second viewing. Bouncing along like the chests of its female leads, this anime shoves to the side any and all plot threads that don't directly concern Minato and his coven of comely combatants. Straightjacketed by the supposed demands of its target demographic, the series remains unfailingly true to its setup and modest goals, and in so doing loses a shot at being something memorable.

One thing I think I should point out before I start my review of this anime is that the manga's creator, Gokurakuin Sakurako, is actually a woman. Her name is really Ashika Sakura and she has done yaoi manga with titles like Sensative Pornograph.

That being said, what's really going on here is her trying to point out some of the absurdities and lack of reality in harem animes/manga. How many women really would move in with a guy just after meeting him? In reality, this is actually a bit of satire on the harem anime genre in general. We have the usual wimpy hero Minato being pushed around by women who are stronger in character than him. Just when things really are about to get out of hand, Miya the landlady comes in and brings things back to reality (using that term very loosely.)

Sekirei is a really stupid anime to most people. It is an ecchi, harem, romance, with allot of action. However out of every harem i have ever seen this one by far has the best characters. This anime was one of the first i have ever watched so even though there are many who would not like this show, i love it. I feel like this is one of those hidden gem shows that gets way to covered in tits and ass. Does it have that yes, but it isn't the only point of the show. So check it out you may like it. The story is about a young man named....

He has just failed his entarnce exam and the story begins when a strange girl named...

falls from the sky :)

I love this anime!!! Not only does it have an interesting plot, but the charecters are absolutley funny and great with each of their individual qualties.. I wish the Anime- planet people add their second season.. There most deffinatley is one, and it;s dubbed as well as the first one. WARNING!!!! If you are uncomfortable with nudity DO NOT WATCH THIS ANIME!! Nudity makes a frequent appearance, but i ignore that and stay with the story.

I really enjoyed this anime, it is the first one I have watched as well as my favorite. I really enjoyed the characters and the interactions between them. The characters in my opinion (Kazehana, Tsukiumi, Matsu, for example) had stand-out personalities that made the anime interesting. Although I liked the fan service, I appreciated the story even more. It had me hooked the entire time. Minato was a great main character as he is not wimpy like other harem anime males. He is confident, determined, and well mannered which I really appreciate. This was just a fun lighthearted anime with enough action and comedy to keep you engaged. I long for a season 3 at some point but it was only a dream.