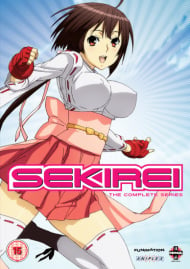 Minato Sahashi was living a normal life; he had just failed his college entrance exam for a second year in a row, and lived a quiet life in a single's apartment. That is, until the busty Musubi fell from the sky on top of him! She is a Sekirei, one of 108 that are destined to fight each other until only one remains; and he or she will ascend to heaven with his or her chosen one known as an Ashikabi. Minato soon finds himself in the embrace of Musubi, becoming her Ashibaki - but his life will only become more complicated. Musubi isn't the last to claim Minato as her Ashibaki, and what's worse, plenty of other Sekirei and opponents stand in his way!

One thing I think I should point out before I start my review of this anime is that the manga's creator, Gokurakuin Sakurako, is actually a woman. Her name is really Ashika Sakura and she has done yaoi manga with titles like Sensative Pornograph. That being said, what's really going on here is her trying to point out some of the absurdities and lack of reality in harem animes/manga. How many women really would move in with a guy just after meeting him? In reality, this is actually a bit of satire on the harem anime genre in general. We have the usual wimpy hero Minato being pushed around by women who are stronger in character than him. Just when things really are about to get out of hand, Miya the landlady comes in and brings things back to reality (using that term very loosely.)

Sekirei is fairly original.  Though, I suppose the plot somewhat resembles other anime like, "East of Eden", in that several participants are forced to play in a life or death type of game.  The overly offensive use of girl bit flashes and situations aside, it is not to bad a show.  There are plenty of action scenes and each of the players' attatched alien-esque mostly female warriors have different types of skills and at different levels.  it should be no surprise that many participants actually want no part in such a farce of a game.  That is a rather nice realistic approach slightly different from your usual anime framework.  Of course this sort of sets a kind of tone and pace among at least the major protagonists where they either reveal some guilt or reluctance or avoid violence or at least deeply struggly internally  over the question of "is playing this game even right".  True maybe alot of animes love to dance on the edge of the grey areas of many questions such as those of morality and often cross them into oddball areas, but this one at least raises the issue of morality and rightly shows that not everyone is a willing pawn to so called destinies albiet very violent at that in this case.  Often however, I have to wonder, what use or purpose do so called controllers really have in this game?  In this sense it somewhat mimics other animes with simllar character inter-relations such as "Rozen Maiden" and "Fate/Zero".  The interactions between the girl warriors is often quite amusing which may help organize the shows characters so that even if they fade at times a bit here and there they are not at times forgotten like well the X-Men movies.  It also often either brings up or aids new story arcs or plots or contributes to the outcome of others started elsewhere.  You see a few rivals of sorts make repeat appearances.  Now and then there are even a few plot surprises which are usually welcome if not thrown at us viewers completely out of the blue with nothing to suggest it's possibility even.   Perhaps a slight downer in a minor way is that one of the plot devices is well hmm sort of seen a bit too often, aka the pseudo blackmail approach to force a non violent or other wise good character to aid a bad guy character and that usually comes in the form of someone's life on the line but not always.  Not that I complain per say that it is not a genuine plot element, however it's frequency so many animes make it a bit tedious, tiresome, and unimaginative to see.  Perhaps in one sense the most humorous part of the series is the guy with the two twins as girl warriiors because amusingly it is often hard to tell who bosses who around.  And their source of contention and debate over that title is quite fun to watch.   I am uncertain whether it is a pro or con as to how slowly the underlying subplot, back story, cause, and main plot elements are to reveal themselves.  At times it is as if things are dragging on a bit to long or slowly with regard to them and at others I feel rewarded to be let in.  This might be because, the series may or may not have reached it's intended ending or number of seasons before closure.  If so, that is sadly the case with many many anime series that do not get a fair chance or at least not enough time to tell the story or at least not enough story to draw enough viewers into them.  This at least starts out fairly quick but I am not so sure the pacing of revealing story and plot secrets after this is up to par.  Apart from a few exceptions, characters are pretty well fleshed out though a few such as the boxer girl, are a bit one dimensional in their depth like she is a melee fighter.  Aside from her immaturity freshmen type newness and her slightly airheaded personality, melee fighting is the only thing she is about.  Despite the fact she spends quite a lot of time on screen and is the first warrior girl for the game introduced, she is sadly also the character least revealed and shallowest of depth compared to every other major character and even the twins.   There are some characters that could use some work or appear a bit too shallow or one dimensional. 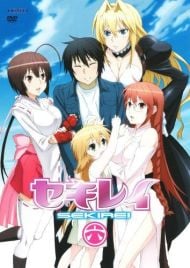 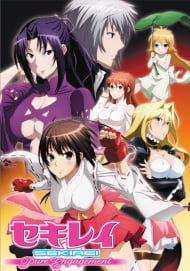 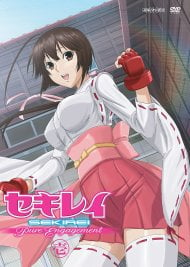 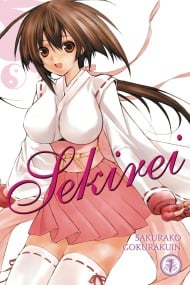 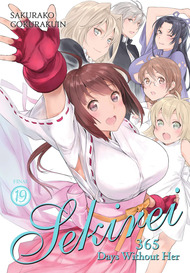 Sekirei: 365 Days Without Her