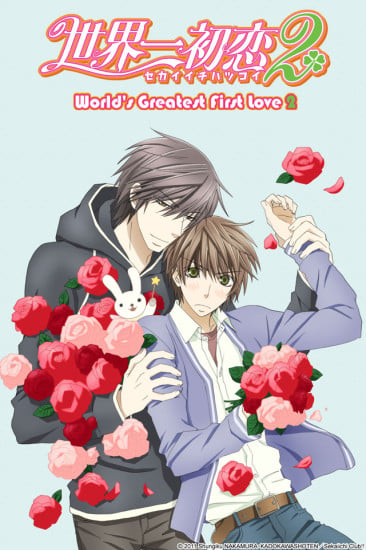 If you're looking for manga similar to Sekai-ichi Hatsukoi: World's Greatest First Love 2, you might like these titles.

Masaki Yotsuya has finally accomplished his goal of being the assistant of the famous designer Yasuyo Kanda! But what he doesn't know is that Kanda-san is also an infamous womanizer who's managed to bed every female assistant he’s ever gotten within no more than an hour! And he also refuses to acknowledge Yotsuha as his assistant! But Yotsuya refuses to give up without a fight!

The daily exploits of the naive, hyper-enthusiastic editor-in-chief Hana and Japan's cutest manga editors — cynical assistant editor-in-chief Aki, and editorial staff: glutton Tsugumi, and otaku Ringo — are frantic, as they attempt to realize their dream of launching the new number one manga magazine, the Monthly Comic Earth Star. And it does not bode well that they have zero experience in actually editing a manga...

No Touching at All

On his very first day at a brand-new job, shy Shima is trapped in the elevator with a hungover mess of a guy…who turns out to be his boss! Togawa’s prickly exterior definitely puts the rookie recruit on-edge, but it doesn’t take long before Shima’s every waking thought is invaded by his overbearing yet totally thoughtful superior. Will Shima put aside a history of disappointment in order to take a chance on a complicated relationship?

Iizuka's gay, and unfortunately for him it's an open secret among his co-workers, who all but whisper about it the second he turns his back. Even worse, he begins falling for his new boss, Takase--at least until they go out drinking one night and Iizuka wakes up the next morning with no memory of what happened.

Ninomiya is an Editor for a fashion magazine. Being a playboy he messes up with one girl to many and ends up compulsory transferred to manga editing department. In this man only den of otakus, he meets his new boss Oda. Oda drowns Ninomiya in work and refuses to acknowledge his professional skills. The arrogant attitude of the editor in chief clashes with Ninomiya's ambitious personality!

New manga editor Haruka has just been assigned to her favorite manga artist ever, Kuroi Ritsu. Kuroi-sensei's manga, "With You" motivated her to turn her life around. When she finally meets shut-in, mopey, entirely unfashionable Kuroi-sensei, Haruka is in for a bit of a shock.

An elite businessman exerting himself at a publishing company is demoted to the manga editorial department, which is out of his field of experience. Moreover, his first responsibility is a comic artist that no one can handle...

Tomonori Ozawa has just landed a job at a large publishing firm. The only catch is, he is the new editor of a Boy's Love magazine! On top of that, he is stuck dealing with Sakurako Kakyoin, a male yaoi artist who is notorious for missing his deadlines. To become a full-fledged editor, Tomonori-kun has to start from the bottom — checking drafts, editing scripts and lettering. Now if only Kakyoin-sensei would stop sexually harassing him, he could actually get some work done!

As someone who does things like secretly reading BL manga, Satou finds himself imagining "entanglements" with men on a daily basis. However, since he also has a girlfriend, Satou convinces himself that this is a mere hobby, and he himself is not gay. Suddenly, he then finds himself roommates with his perfect, ideal handyman type, a man called Arihara. Imagining more and more indecent things, after a war with himself, Satou eventually comes to accept the romantic feelings in his heart.