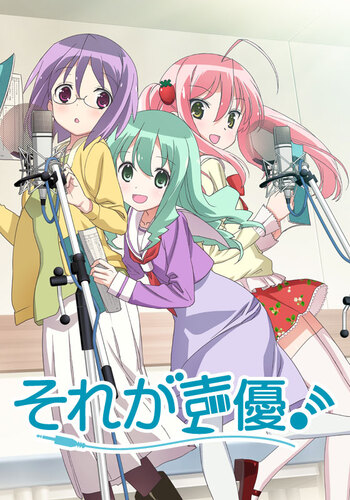 What brings on this wonderful 15-minute episode featuring the Seiyu Trio, Ichinose, Moesaki, and Rin? It brings to mind two classic TV sit-com cliff-hangers that failed.  Alf and Benson.  One where the wily alien from Melmac is finally captured by the Aien Task Force.  The other with the cantankerous election involving Benson, Gov. Gatling, and some political ne'er-do-well with the announcement of the winner. One was obviously striving for another season, and, when not getting it, settled for a "made-for-TV" movie.  The other just wanted to leave its audience with an air of mystery, a question that will never be answered. And Sore ga Seiyuu: Petit Uchiage ... why? Consider that Sore ga Seiyuu ended happily but uncertainly.  Ichinose did not get the coveted associate seiyu position with Aozoka Productions, but neither did she get fired.  Her situation has been deferred for one year. the hopes for a second season.  But, in the world of anime, the industry moves forward in increasingly novel manifestations.  New ideas to be explored, and a tribute piece for all those valiant voice actors in the various expressions of that media has been done.  Move on. So, I see Sore ga Seiyuu: Petit Uchiage as a thank-you to all the fans who fell in love with the girls from the realm of voice acting and their sorrows and victory.  And it does resolve that touch of uncertainty Ichinose has over her commitment to the life of the seiyu.  We see no auditions, warm-ups, recordings, concerts, or what we saw in the solo season. It all takes place at a spa.  The girls are celebrating a thank you from their producer Kaibara for the successful EARPHONE concert.  Again, that one from episode twelve.  The girls start with a dip in the public baths, a luxurious hot tub experience where the number of clothing items the girls are wearing equal the number of fingers on Capt. Hook's left hand.  Avert your eyes and move on, for the next scene is pivotal.  In the souvenir shop, the girls pick up a doll/action figure and enact a anime-style battle.  Until they are spotted by two children.  The girls are embarrassed, but the kids want more.  At the same time, the shop-keeper and the manager of the spa spot them and recognize the girls as the members of the girls pop band, the EARPHONES.  They request a concert and the girls agree.  It is an enjoyable time for all the guests, and particularly Ichinose, Moesaki, and Rin who have been recognized as celebrities. On the bus ride back home, Moesaki and Rin snooze happily, but Ichinose is up thinking about what happened that day.  The two young children who were entertained by the girls' play in the souvenir shop happen to be in the seats across from her.  They are sleeping, clutching a cherished photo of the EARPHONES.  Ichinose considers the joy she has to offer in whatever she may do in her life as a seiyu ... and that's what's important.  Exeunt Ichinose, Moesaki, and Rin. I hope, perhaps, that somewhere in the anime archives is a series called something like 'Hey! Hey! We're the EARPHONES!'  But that is wild dreaming in the world of anime where characters are created, strut their stuff, and pass into oblivion.  But, anime is the place where wild dreams (and dreamers) thrive.  Who knows? 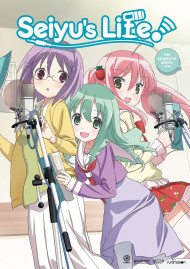 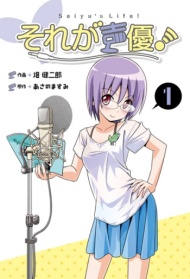