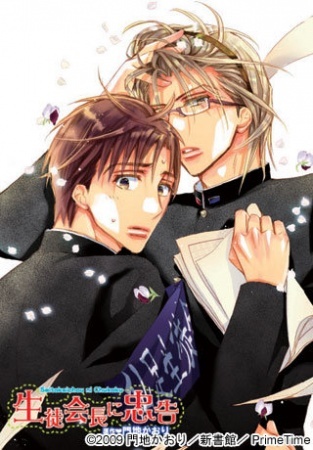 Story<+sothis> I STILL DONT KNOW WHAT THE PLOT IS WTF Somehow, I always find myself drawn by sothis into watching some obscure and frankly bizarre series. From Strange Love to 1+2=Paradise, no title is off-limits in the eternal struggle to add anime to the database. This time was different, though: it was time for a team effort to watch the very risqué Seitokaichou ni Chuukoku, leaving me with the short straw of reviewing it. Not quite knowing what to expect from this, none of us were prepared for utter befuddlement as the final credits rolled. Despite opening with two very beautiful boys, the series wastes no effort in unravelling an extremely sketchy plot. Kokusai is an overly naive student president, who is slightly upset that the previous vice-pres was dismissed for his unwanted sexual advances. Enter Chiga, a highly protective and highly sexed replacement for the student body, who takes it upon himself to keep the virginal Kokusai safe from the frequent stealth gropes he suffers – unsurprisingly, he instantly falls in love with him. Now, in all honesty there are too many distractions that detract from this actual story; for example, the title of the first OVA: “The class president was... getting a different kind of rush hour squeeze”. That in itself is hilarious. Especially after a few beers. With the first of the two episodes focusing more on Kokusai’s fears and Chiga coming to terms with his new found (homosexual) feelings, there is very little story and more about building characters. This feels extremely drawn out, especially as I don't particularly watch shounen-ai for a comprehensive plot line, even if it is nice. The second in this two-shot short reaffirms this point, as what little plot there was falls to the wayside to instead be replaced with some extremely hot man-on-man action. *This* is why we watch yaoi, and Seitokaichou does not disappoint. Sadly, as much as watching two beautifully drawn bishounen brings a smile to my face, it doesn’t even start to cover the glaring continuity issues thrown up from the attempted plot in episode one. For example, we never find out who gave Kokusai his happy ending as he slept, or what happened to the original vice president. Even the script doesn’t help matters, as some extremely cliché and bizarre moments grace our screens. Sadly, this isn’t Junjou Romantica, and the most glaring difference between the two is a lack of coherent storytelling.Animation<+sothis> GLIMMERING <+sothis> his legs are way too long, jesus <+sothis> ahahahahahaha wtf Typical of the genre, the boys are svelte and stunning – one may say easy on the eye. Each is drawn with real love, and the quality of the animation shines, as well as each of the characters quite literally sparkling. Using a gorgeous palette of colours, there is no skimping on quality in the impressive modern visuals used. Unfortunately, it seems that the artists have an unhealthy obsession with nipples; there is an inordinate amount of time spent with a close up of a nipple being played with, and then a nipple being thoroughly licked. It soon becomes uncomfortable, especially as you talk about it with the other people who are watching the same craziness as you!Sound<+omny> the sound effects are killing me xD <&KiraRin> the porno music is awesome too Utterly torn on how to mark this section, I will firstly praise the use of the voice actor for Gintoki from Gintama as Chiga. Gruff and very sexy, he plays the older and seductive brother-figure extremely well. In fact, all of the seiyuu break out a sterling performance and really bring each character to life. As mentioned above, the musical accompaniment does have the ring of a bad 80s smut movie to it. Not that I’ve seen any.... However, my biggest issue with the audio of Seitokaichou is the overuse of sound effects, especially the graphic slurping sounds as a nipple is given a little too much attention by someone’s mouth and tongue. To be perfectly honest, it made my skin crawl. Not really an effect you want whilst watching a saucy and graphic shounen-ai title.Characters<+omny> lots of guys going after 15 year old cock <+omny> or "the average guy" in this case :P Focussing on two main characters, Seitokaichou offers two very different personalities. Kokusai is the stereotypical uke: naive, inexperienced and utterly cute. Possibly verging on the whiny, his surprise groping on the train invokes more hilarity than sympathy because of his utterly clueless nature. Gifted with some utterly chucklesome lines, his description of “oh, those are his fingers in there” deserves a firm round of belly laughs. I’m still not convinced that this is the recipe for an utterly resistible and humpable guy but, personally speaking, I prefer a seme... Like Chiga. A little more restrained than similar, more sexually aggressive characters, his struggle as he comes to terms with feelings for another guy are relatively endearing. His open and honest inner monologue add to his strength as a protective, and then seductive, figure. Although not very believable, the characters are sexy enough to drive the viewer to the end of the OVA, even if forty minutes of development was completely unnecessary.Overall<+omny> ye lots of things are gaping in here <+omny> plot holes, buttholes Far from the polished beauty of Junjou, Seitokaichou is more for those fans who want to be teased to the extreme by untold amounts of thigh stroking, nipple licking and close-ups of strained and gasping faces. Giving joy with one hand and taking with the other, the sexy smut is outweighed by the bumbling sound effects, whilst the beautiful bishies are drenched with a little too much sparkle juice. As has been documented over the years, men like a quick mindless fix from porn, whilst women prefer more story to their erotica. Sadly, this OVA falls a little short for its target audience, as the plot is utterly nonsensical and the characters a little too cliché.

Since I seem to rate by comparison (I’m just finding out that about myself), if there was more Yaoi anime out there the rate of this anime would probably drop. Since there are still few Yaoi animes out there I gave this a 6. The story centres on the student council vice-present, Chiga, who is in love with the president, Kokusai. Kokusai is an airhead and doesn’t really notice a lot of things going on around him (such as people taking advantage of his body). He also doesn’t realize Chiga’s feelings, and not even that he DOES actually reciprocates them. Ok, so now to the bad points: -The animation could be better; -Music...NOT good -Ok I’m a bit biased because I’m familiar with the manga, but this OVAS doesn’t really have a story. They kind of just stuck with the introductory part of the manga. As someone who wouldn’t mind seeing their entire story told in anime I can’t avoid but to feel like two OVAS are not enough. They came short on story development department. - Let’s get real here...if you are not going to give us the manga whole story but only two short OVAS, so then give us more smut and fan service as some kind of compensation. I mean, I would understand if there was little sex and a lot of plot...but no, I feel as a viewer we don’t get much of either. Good Points:  What do I say here besides it was fine, at most? -It did stick to the first volume of the manga; - I like the characters. I think both the male leads are charismatic characters, especially Kokusai...I think he is kind of funny; -I liked the voice actors, I think they did ok; -It is entertaining if you want just an uncomplicated yaoi anime; -There are a couple of sexy scenes there. Not the best, but still good; To summarize Seitokaichou ni Chuukoku is not really bad, but is not really good either. It’s an ok Yaoi anime that will help you pass the time at most. But it probably won’t be making a lot of people’s top yaoi anime lists.

Yaoi seems to go hand in hand with forced sexual activity which is one of the main reasons I could never find any enjoyment in it. At first glance this OVA seemed somewhat different and almost kind of entertaining in a "This is beyond cheesy and silly" kind of way; I was wrong. The story revolves around a relationship that forms between the typical shy kid and the much more dominant and masculine "heartthrob". It would be foolish to expect any particularly interesting characterization in a title from this genre, but even with that in mind there's no denying that this was worse than the low standard. All of the characters act in very unnatural ways and are equipped with personalities comprised of one or a few exaggerated traits at most. The shy kid is shy, the protective kid is protective and the comic relief kid is... not very comically relieving. At least there's one pattern-breaker, for better or for worse. The animation is mediocre as is probably expected, with minimal movement, decent level of detail and a strong focus on facial expressions. Musically, though, it's a very repetitive and obnoxious formula with the same melodies repeated over and over again as well as... unsettling sound effects including plenty of disturbing slurps. All in all, despite the horrible writing this could have been a stupid but kind of sweet and enjoyable tale of romance if it weren't for one thing; the show descends into a pit of molestation obviously meant to arouse the viewer. It starts out as an attempt to amuse the audience but quickly ends up working both as a poor plot device constructed to create a need of protection for the "adowwably helpless blushing boy" as well as a source of excitement which is more or less unsettling. I guess it boils down to "If you don't like it then don't watch it" material and viewers who like to substitute pornography with non-pornography might find themselves enjoying this. If you want to treat it as a regular anime that just so happened to develop homoerotic ambitions and judge it based on storytelling, characterization etc. it won't really do anything for you. 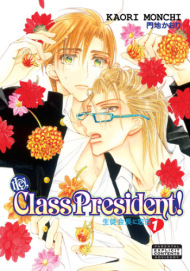