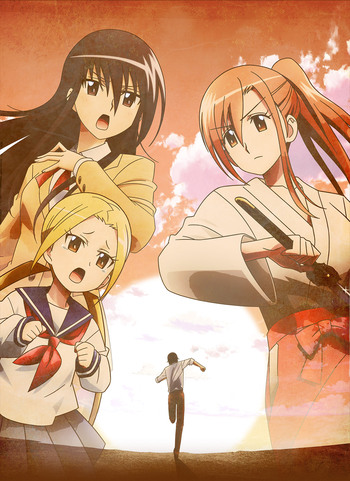 School doesn’t have to be boring; for Chiyo and her friends, high school brings no dull moments! Chiyo is asked to bring her video camera to class and make a film to put in a time capsule. Overbearing and obnoxious Tomo just can’t stand to let Chiyo have all the fun though, so she quickly runs off with the camera. From the moment she has control, things are turned upside down in this quiet school. Despite the chaos, all of the girls shine during their short moments of fame. Tomo may be wild, but she manages to perfectly capture the true personalities of everyone on this tape that will be around for years to come... or will it?

Osaka is curious, she is puzzling, and above all she is clueless. On this particular day, her curiosity is focused on the cutest little set of pigtails you have ever seen. These pigtails happen to belong to the cutest little 10-year-old genius you have ever seen: Chiyo-chan! When Osaka just can’t stand it any longer she reaches up and grabs the pigtails, but much to her surprise they seem to have a mind of their own. Jumping right off of Chiyo’s head, the pigtails make a bouncing beeline towards the window and escape in a hurry! One very sad little Chiyo-chan desperately runs after them, but what adventures await her in a world where pigtails are so free and lively!?