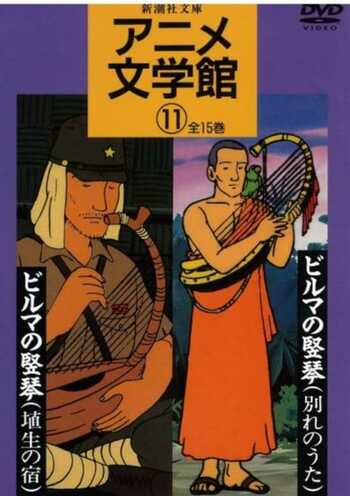 Do you know the dark dictionary? No one knows when this book has been in the world. However, it is a terrifying book that has long been devastated by human fear. At some point, it will be quietly placed in a secondhand bookstore, in a library, or in a midnight convenience store. And invite what you get into the world of terror.

One day on her way to school, the chain on Renge Ohyama’s bicycle snaps leaving her stranded by the side of the road, that is until the friendly Sumire Yotsuya offers to help. The only problem is Sumire isn't a normal teenage girl but actually a doll being controlled by a creepy middle aged man! Fleeing for her life, Renge hopes never to see the strange duo again, however when she arrives at her new school she not only learns that Sumire is her new classmate, but also sits right behind her and is intent on becoming friends. Now Renge must deal with the enthusiastic ideals and affections of her new pal as Sumire tries to fix every problem and help every person she encounters - even if no one takes a creepy old guy and his doll all that seriously.

Kanna Seto lost her childhood friend Haruta in a an accident when she was a freshman in high school. Carrying the emotional pain from that incident throughout her life, Kanna is still wounded as an adult. Will she ever be able to love again? The series is composed of coherent episodes that feature different characters.

Count D's pet shop has had roots in numerous countries, from Germany to America and beyond. Always established in the city's Chinatown, Count D offers a variety of rare creatures to qualified buyers. But with his reputation comes skepticism; Count D's shop is rumored to be involved in human trafficking, selling pets that are said to look like men and women. After being investigated in Los Angeles for these alleged crimes Count D sets up shop in the Red Light District of Shinjuku, Tokyo. He continues to offer his services with a curious smile, all the while under the scrutinizing, suspicious gaze of Woo-Fei Rau, D's new landlord.

High in the sky is the Yume Kira Dream Shoppe, a magical place where any dream can be granted in exchange for something dear to you. Rin, the shop's owner, and his plush rabbit assistant Alpha sign contracts with those in need, from a beautiful tree to a girl unable to confess to her secret love. Using rare and powerful items, Rin and Alpha will help bring joy to many lives.

One is super shy around girls. The second just hates them. The third couldn't care less unless she’s 2-D. Welcome to Dadadan, a slapstick school life comedy following the antics of three males and their troubles with the enemy – females. Though the trio can’t stand to be near the opposite sex (either out of hate, disinterest, or difficulty), the girls themselves have no problem migrating to them!

If you have a wish you want to come true, then catch a demon! When the clock strikes midnight on Friday the 13th with a full moon, place two mirrors facing each other. A demon will walk along the pathway between the two mirrors. At that moment, use the bottle you have prepared to seal it up. If the demon does not grant your wish, it will turn to dust. If you catch a demon, what will you wish for?

Just spend three seconds of your day on this three-panel comic!