Alt title: Once Upon a Time... Life 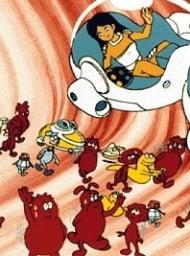 802 users are tracking this. Log in to see stats.

Man, this is such a special series! Although not anime-looking at all for being made in collaboration with France, it still remains amongst the most brilliant works of educational animated series ever made. SCRIPT: 5 It’s hard to look for a story in a series of stand-alone episodes. Every episode is basically just a cartoonistic representation of how does an organ work or how does the human body reacts to diseases or infections. There is a beginning, a middle and an ending for each segment, yet there are no real surprises or plot twists, as the structure is basically that of a fairy-tale and aims to educate and not really to excite you with mystery or awesome battles. Thus, I give it a medium mark for being a simple yet concrete way to tell a story and teach something. CAST: 6 It is also hard to look for characters in a completely non-character-driven series. The characters are basically nothing more than plot elements, present only as anthropomorphic representations or bodily functions. So, there are no really distinctive personalities here. Everyone looks human and does silly jokes all the time but down to it, he/she is there only as means to teach something. The characters are basically a more alien-looking cast from the Ginga Patror PJ series (made by the same company) in a relaxed position, based on looks. Thus, the wise old man represents the brain functions, the Star Trek federation-like humans the anti-bodies that protect the organisms from invasions and the ugly / stupid aliens are the bad viruses and bacteria that constantly invade and try to multiply in the cells. There are also several other less detailed yet more straightforward characters, such as sugar in the blood that really looks as a candy. Anyways, they all look funny and perky, yet none really has a major part in the story or a memorable personality. They are very nice to watch doing their robotic functions in a strategy-like fashion. PRODUCTION VALUES: 7 It kind of looks like the Smurfs actually. Don’t look for slicky details or movements here. The animation is actually quite simple and crude, with a lot of deformity and repeating frames. If you want uber visuals, you won’t find any. Yet, the fantasy / alien way everything is depicted is very original and eye-captivating, so as long as you don’t stomp on initial looks, you will actually love the distinctive world. This microcosm feels like a different universe by itself, existing in every one of us, with its own rules, jobs and hierarchy. Plus, everything looks alive, as everything actually IS alive. It has eyes and mouth and makes jokes. Said speech and sound effects are again nothing to bother in terms of acoustics. Think of the simplicity of the Smurfs again. No stereo, blood-boiling rock themes here. Yet, funny squeaks and slapstick humor and childish voices, accompanied by some simple yet elegant music themes is all there is and ever needs to be. LEGACY: 10 Honestly speaking, this series is amongst the most innovating and successfully interest-captivating to teach a kid about the human body. It is brimming with so many lovely ideas and easy-to-understand events that anyone watching can easily learn about the human body without getting bored. I must say, it was the series that really made me be interested in biology when I was a kid. It also was a great inspiration in my sketchography, as I loved drawing critters I saw in videogames and cartoons. Further down, it even helps you think in basic strategic ways, like learning to play a videogame. It is also one-of-a-kind as there simply isn’t anything remotely similar to it, or at least not that good in what it tries to teach. It is also far more original than all those silly shows where it’s just bad aliens or super villains trying to rule the world. This series actually teaches kids instead of making them wanna break something. SUGGESTION LIST Ginga Patrol PJ

It was the best fun and educational anime. I still remember the things I learned