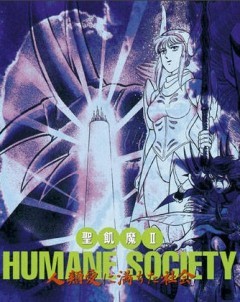 If you're looking for manga similar to Seikima II Humane Society: Jinrui Ai ni Michita Shakai, you might like these titles.

Onigawara Yuutarou is your average high-school kid, a bit on the quiet, kind-hearted side. One day, he walks through an arcane ritual and ends up summoning a demon, Slayer, who will grant him tree wishes. Horrified by Slayer's violence, Yuutarou wishes for Slayer to stop using his demon powers, turning him into a human. Now Slayer's stuck with Yuutarou in a perfect personality mismatch, and to top things off, if one of them gets hurt, so does the other.

Satan created 72 children immortal and immune to any injury, unless inflicted by a weapon forged in the fires in hell. Each child was given a weapon and told to fight for their survival. The sole winner will become the new king of hell. Hagino Sin, the child despised most by Satan, escaped the netherworld and tricked a kind-hearted writer into taking him home. The plan backfires and Sin becomes attached to the savior and his friends at school. Sin must fight for his survival and kill his siblings before they kill him. Can he survive without losing his newfound humanity?

What is it that you desire? Money? Love? Walk again? Be stronger? Whatever it is you wish for, you can get by asking the legendary and awe-inspiring "Demon's Plan"; a sacred object capable of granting anything to "the chosen ones."

A story about two young demons who are always slacking off at work, a place that happens to be an organization that vows to keep the balance between the worlds of the living and dead by killing humans!

NORA: The Last Chronicle of Devildom

The powerful demon leader Dark Liege has a big problem with the hot-headed and cocky Nora, but Nora has ignored and insulted her for the last time. As punishment for his ignorance, Dark Liege seals his demonic powers and sends him to the human world until he has learned his lesson. Now, a furious Nora is not only powerless, but also has to deal with becoming a familiar to a teenage boy! Kazuma Magari decides to make it his duty to tame his new "dog" and teach him some manners, but Kazuma's life gets even more complicated as a demon civil war begins to break out around him. Can he teach his dog demon some new tricks to crush the resistance, or will he fall victim to the coming battle?