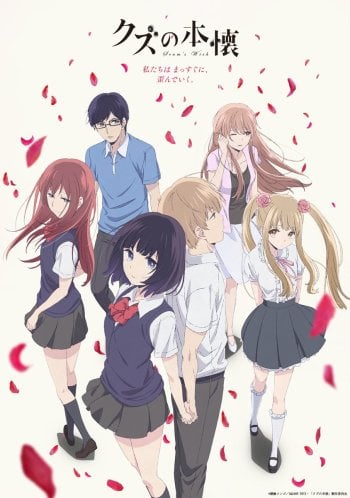 This anime is a spectacle of art, both in visuals and symbolism. The way the characters are drawn with delicate lines almost resembles how fragile and vunerable they are.
It's a very eerie beauty that is conveyed.
The voice acting and particualrly the narration are exemplary in both lighter and darker tones of the show.
It's also worth mentioning the main theme that is one of the most touching tracks I have heard in a while. Truly mesmerising. The piano keys mix a sombre dip with a hopeful rise.
The characters are very fleshed out through simple yet informative backstory.
Overall it is a very mature and personal attempt at portraying human relationships.

FIRST IMPRESSIONS: I'll have to let Scum's Wish (Kazu no Honkai) be a good reminder to really examine the premise of a show more closely before watching.  The genres were interesting enough to catch my eye in the first place, romantic drama, psychological and so on sounded like good makings for a more serious romance after watching the more light hearted and bubbly romance shows that I loved such as One Week Friends, Yona of the Dawn and Snow White With the Red Hair so the best I could hope for is something like Destiny of the Shrine Maiden (Kannazuki no Miko) but rather I end with School Days redux that mysteriously is trending better than School Days.

The basic concept of two teenagers forming a pact to quell their lonliness should sound and come as a heart breaking romance or the potential of a feel good story where they find the love with each other but the first episode left such a sour taste in my mouth that I only hope for a miserable end to our two little losers who deserve what they get.  Hanabi Yasuroka is in love with an older man who is her teacher and curiously referes to him as her older brother despite no relations and Mugi Awaya likewise is in love with a teacher that is in love with the man who Hanabi is in love with, can this awful love web become more convoluted and ridiclous.

Though having no actual romantic ties our two main characters certianly got physical enough to have the most casual sex and try to write it off as nothing and not being cheap friends with benefits.  Anime fans laude this show for the maturity but casual sex in an anime isn't maturity it's just fanservice that goes a little further.

The first episode by itself is a mess in structure jumping between time periods of past and present and the confusing referral of Hanabi's love interest as her brother leads a viewer to belive this may be an incest based anime.

Though only one episode in I already don't have a good feeling for the show, two deplorable and dispicable main characters.  What a wonderful story, two characters using each other to get with someone else.

Don't watch this piece of garbage. It's not good. It's not realistic. It's bad and everyone who thinks it's good after finishing it should feel bad. 10 episodes of buildup lead to one of the most shallow "trying to be deep" endings I've ever seen.

I have been waiting for Scum's Wish to come out so a few months now and here are my thoughts based on the first episode.

The animation is beautiful and gorgeous and actually does a very good job of representing the art in the manga well. The colors were very pretty and seemed to fit the anime.

I enjoyed the opening and the voice acting was good and solid.

The anime seems to follow the manga pretty well and the transitions between scenes are smooth(thanks to the wonderful animation. From what I've seen in the first episode they are going to follow through with adapting the manga and looks like they aren't going to skip over anything.

It's great seeing them adapted on the screen and I like their designs. Though I would have expected the teacher to look a bit differently.

Overall this first episode was great and I can't wait until the next. I decided to write this review in order to spread word about this. Go and watch if you have not. Though this anime might not be for everyone. Again this anime is mature and has darker themes.

I wasn't planning on watching Scum's Wish, but I'm glad I did. This is a poignant, painful and realistic view of human relationships - beautiful in both it's fragility and startling realism. It is indeed intended for more mature audiences, but the sexual content in the show is true to the characters and their motivations, so I wouldn't consider it unecessary. Beyond the theme of love and sexual awakening, the show touches on discovering and accepting your true and authentic self, even if you aren't who you believed yourself to be. Ultimately, Scum's Wish is emotionally satisfying, yet heart-breaking.

UPDATE: After watching the final episode, I stand by my review. This is a true to life, dramatic anime. Heartbreak and all. If you want a 100% happy ending, this anime is probably not for you.